“His art is a deep and pure expression of his immense love of life…He joined with it an exceptional sense of colour, outspoken, ringing colours, rich and splendid in their very substance.” - André Dunoyer de Segonzac on J.D. Fergusson in the foreword to Fergusson’s Memorial Exhibition, 1961

John Duncan Fergusson painted Royan during the exceptional period when he lived in France from 1907 until 1914. More than any other British artist, he played a part in the heady creative circles of Paris’s pre-war art world and whilst there made the works on which his international standing is based.

Following sporadic attendances at the Académies Colarossi and Julian in the French capital in the late 1890s, Fergusson began his career in Edinburgh. His first solo exhibition was held at the Baillie Gallery in London in 1905. However, as Alice Strang has explained: ‘An increasing interest in developments in contemporary art in Paris and parallel frustration with the conservatism of the art world in Scotland, an inheritance following his father’s death in 1906 and the start of his relationship with the painter Anne Estelle Rice (1877-1959) in Paris-Plage in 1907, culminated in Fergusson’s decision to move to Paris later that year.’ 1 Fergusson declared ‘Paris is simply a place of freedom’ and established himself in a studio in Montparnasse.2 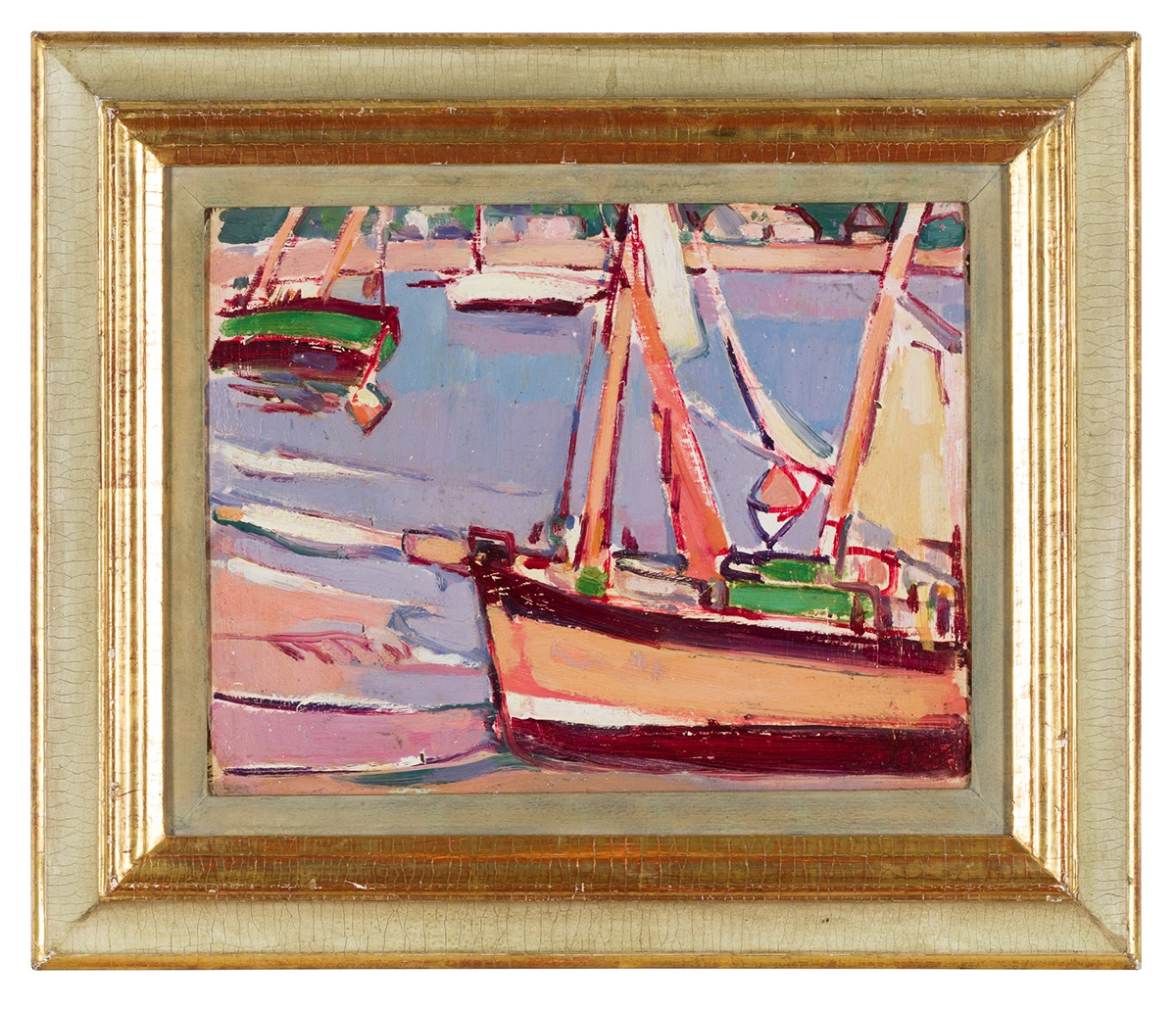 First-hand experience of the very latest developments in French art, such as those made by the Fauve artists Henri Matisse, André Derain and Kees van Dongen, had an immediate and dramatic effect upon his work, as can be seen in Royan. This encompasses the bold colour, simplification of form and expressive technique which signalled Fergusson’s progression from the Edwardian sophistication of his earlier work to the forefront of the avant-garde.

Royan dates from a key year in Fergusson’s career. In 1909 he exhibited at the Venice Biennale for the first time and moved to the inspiring environment of a new light and orderly studio, in the rue Notre Dame des Champs. Moreover, as Kirsten Simister has written: ‘Fergusson’s artistic confidence and ambition reached an all-time high in 1909 when he was elected a Sociétaire of the Salon d’Automne and given an entire wall for his exhibits.’3

Election to this progressive exhibiting society was recognition by Fergusson’s peers of his contribution to the modern movement and he recalled: ‘To me, considering myself a revolutionary, this was a very great honour…it had the effect of confirming my feeling of independence, the greatest thing in the world, not merely in art but in everything.’4 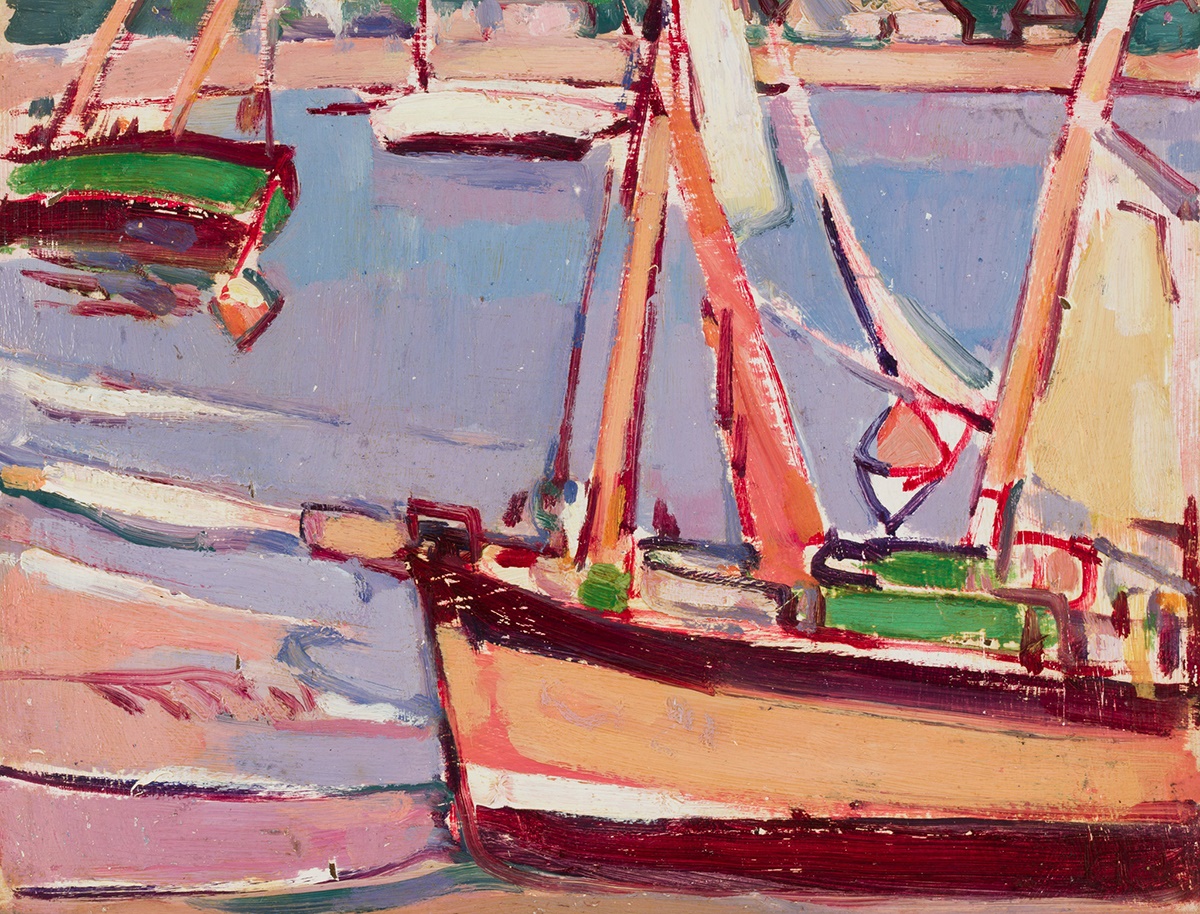 Rice received the same honour the following year and together they became key figures in the celebrated group of Anglo-American artists who, for example, founded the cutting-edge journal Rhythm in 1911. After three years of encouragement from Fergusson, his fellow Scottish Colourist Samuel John Peploe moved to Paris in 1910, where he lived for two years.

Simister continues: ‘In both 1909 and 1910 Fergusson, Peploe and Rice spent summer holidays together painting in Royan and nearby Saintonge, on the west coast of France. The sea and harbour inspired a number of small paintings made outdoors, which make use of stronger colour to heighten the emotional impact and mood of the scene…[Some]…indicate a tighter, more structured organisation of composition, a feature which became more pronounced over the years to come.’5

Fergusson had long been stimulated by working en plein air, in locations as varied as Princes Street Gardens in Edinburgh, the Scottish island of Islay and during summer painting trips to France with Peploe from 1904 to 1907. His enjoyment of responding directly and spontaneously to light and weather conditions, as well as to architectural and natural features, is clear in many of the paintings he created outdoors.

In 1913, Fergusson left Paris in search of ‘more sun, more colour’ and settled on the Cap d’Antibes.6 Due to the outbreak of World War One he moved to London, but returned to the French capital for a decade from 1929. World War Two prompted a move to Glasgow, where Fergusson died in 1961.

Also featuring in The Hancock Collection... 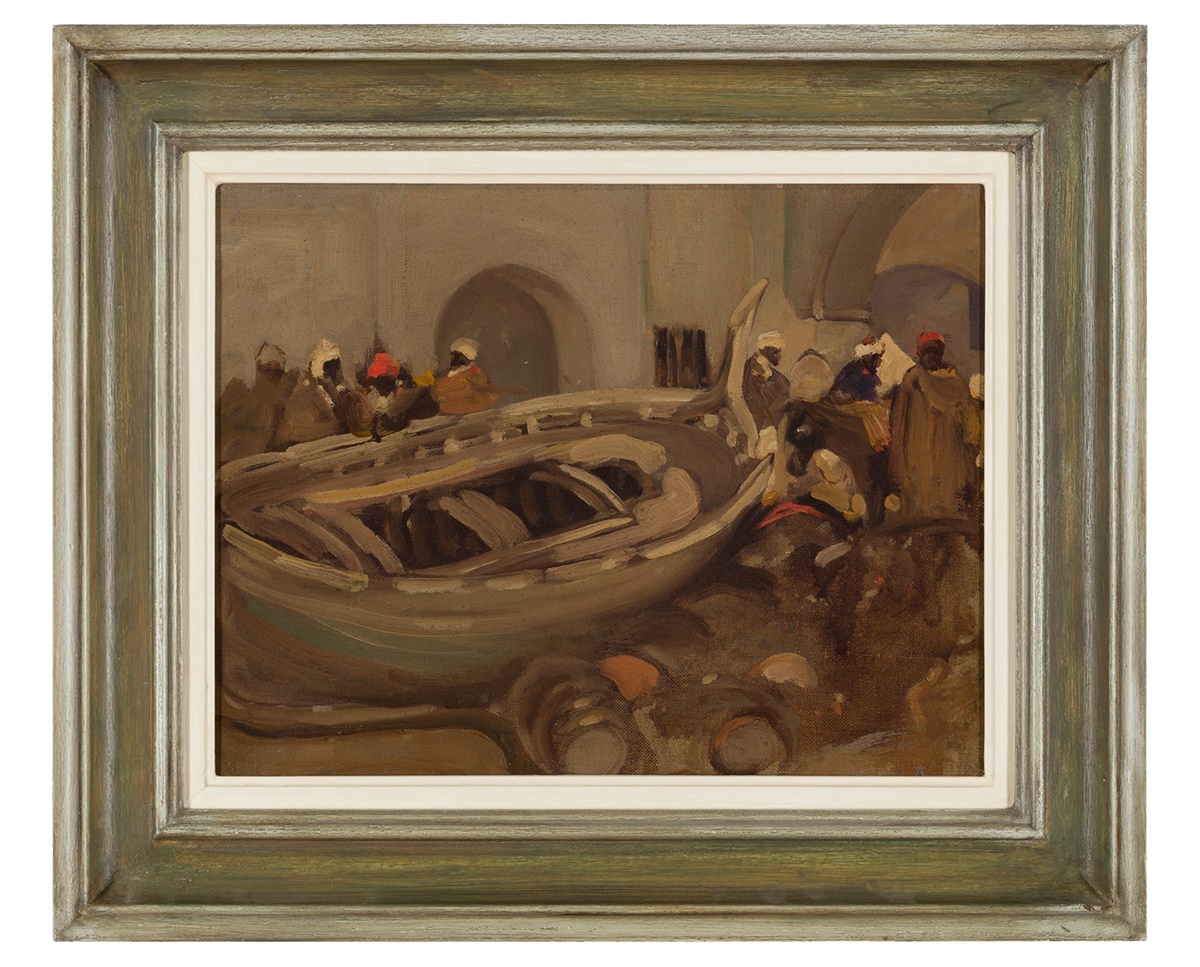 Fishing Boat, Morocco is an accomplished early work by J. D. Fergusson, which he painted during a trip to North Africa inspired by the travels of the artist Arthur Melville (1855-1904). Fergusson’s recollection of the exact date of his trip was not precise, but it is believed to have been undertaken in 1899.1 As his biographer, Kirsten Simister, has explained: ‘From a very early stage in his career travel was to provide a crucial spur to his artistic development’ and his first trip abroad is thought to have been to Paris in 1897.2

Melville, a forerunner of the Glasgow Boys, was an exceptional watercolourist and an intrepid traveller; he spent time in Morocco in 1890 and 1893. Forty years later, Fergusson recalled: ‘I had heard of Melville; he was my first influence. Although I never met him or even saw him, his paintings gave me my first start; his work opened up to me the way to free painting – not merely freedom in the use of paint, but freedom of outlook.’3 His wife, the dance pioneer Margaret Morris, continued the story: ‘Fergus, having been much impressed by the wonderful free paintings of Morocco by Arthur Melville of the Glasgow School, decided to go and see for himself the effects of intense light and shadow. He told his family he would certainly not write and had no idea how long he would stay.’4

Painted on an easily portable canvas measuring 10 x 13 inches, Fishing Boat, Morocco reveals an example of the bustling scenes which caught Fergusson’s eye during his explorations. His enjoyment of the application of oil paint is clear in the freely executed brushstrokes. A skilful use of highlights, especially of bright red, is combined with a muted palette in which tonal values are explored and hints at the colourist he would become.

Fergusson’s pride in his Moroccan works is proven by the fact that they made up the majority of the works he exhibited with the Royal Society of British Artists in London between 1901 and 1903. Few are extant, but examples are held by The Fergusson Gallery, Perth (1992.123), University of Stirling (1968.2) and Glasgow Life: Kelvingrove Art Gallery and Museum (3163). 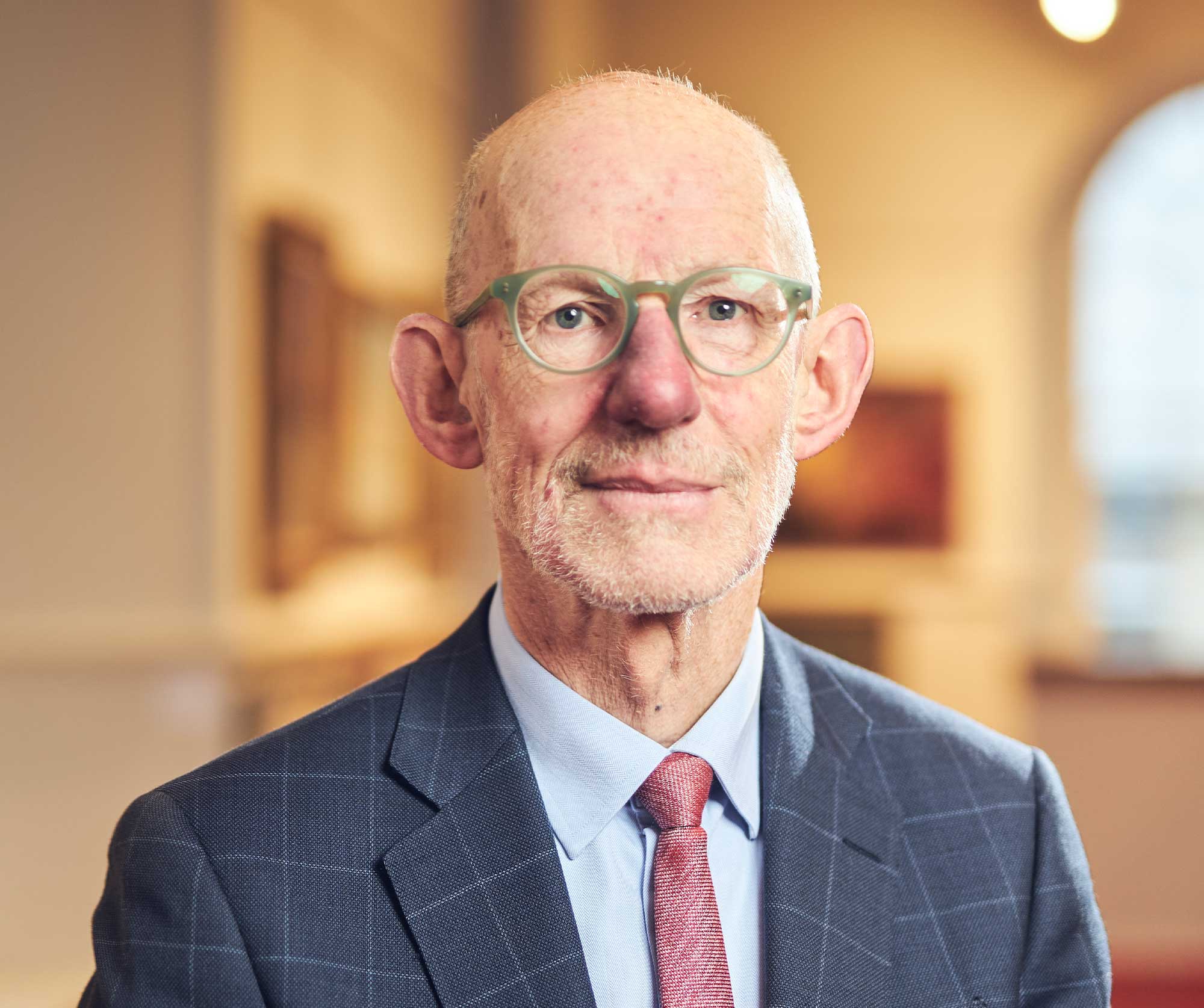