The Bodhisattva of Universal Goodness, Virtue, and Worthiness

Originated from India, the image of Fugen Bosatsu followed the spread of Buddhism through the Silk Road and later by marine route to the Japanese archipelago. The magnificent example presented here embodies all the requirements of the Buddhist iconography, emanating meditative tranquillity and the sense of transcendental wisdom. We are delighted to present this example in our May 2021 auction of Fine Asian & Islamic Works of Art.

Originated from India, the image of Fugen Bosatsu followed the spread of Buddhism through the Silk Road and later by marine route to the Japanese archipelago. Believed to be the white six-tusked elephant who entered Queen Maya’s womb and became the later Siddhartha Gautama, the iconography of Fugen Bosatsu in Japanese Buddhism, or the larger geographical sense of East Asian and Mahayana Buddhism, never drifted afar from its descriptions in the Lalitavistara Sutra, especially on Fugen’s distinctive elephant vehicle (vahana). 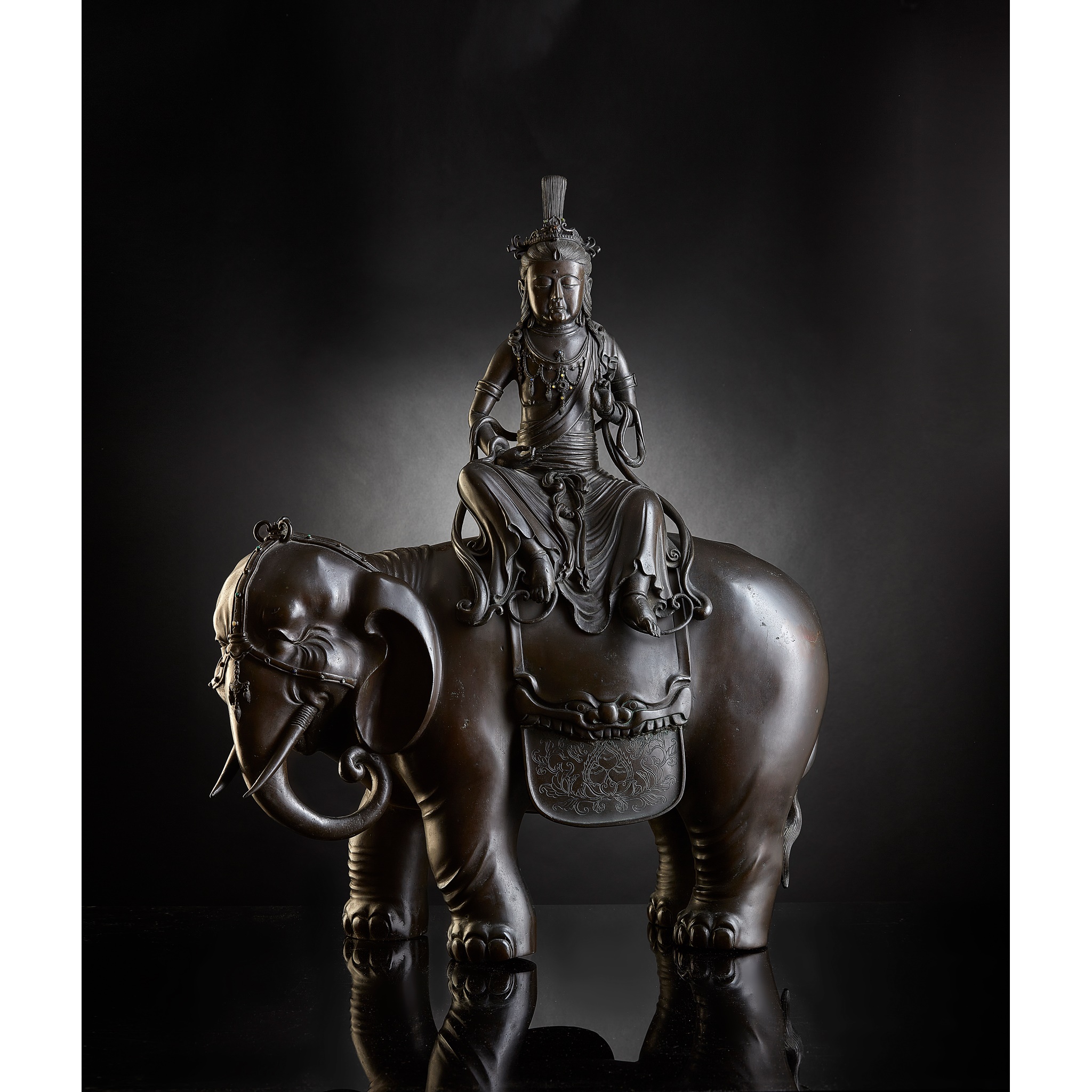 The magnificent example presented here is conventionally cast in generous proportions in two parts. His face with a downward benevolent gaze forming a meditative solemn expressions. The Bosatsu is distinguishable largely by his designated Elephant King vahana, which he sits on in latitasana. The two parts are combined with a short slot issuing from the end of the U-shaped ribbon on the figure’s back, sets on an aperture on the top of the elephant before a large and hollowed hemisphere. The harmonious formation of the group embodies all the requirements of the Buddhist iconography, emanating meditative tranquillity and the sense of transcendental wisdom.

A comparable example of Fugen Bosatsu atop elephant can be seen in the Sanjūsangen-dō, a Buddhist temple of the Tendai sect in Kyoto, Japan (Publication: Buddhist Deities of Sanjusangen-do: Rengeo-in Sanjusangen-do Temple, 2000). This 13th century example was carved in the Heian-Kamakura Period, deemed to be the prototype of Fugen Bosatsu in Japanese Buddhism. The differences with our example are the presence of a lotus throne on the earlier piece, and the bosatsu is much relaxed in positions and incorporated better in flow with his vahara in the later piece.

This large bronze sculpture group of Fugen Bosatsu was showcased and bought by Robert Cowan Marshall from the Glasgow International Exhibition 1901.

Robert Cowan Marshall was a Glasgow Industrialist and a contemporary of the shipping magnate Sir William Burrell and Kilmarnock lace tycoon Alexander Morton. Cowan Marshall purchased Bruntshields in 1896 from the local horse dealers in Paisley, the Crawfords, where he continued his passion for both the Hackney Horse but also his love for collecting. Bruntshields was home to his treasures. An image from the ledger made by Cowan Marshall would indicate that this large bronze sculpture was exhibited and purchased at the Glasgow International Exhibition of 1901.