Highlights from the May 2021 Auction

This May, our auction of Fine Asian & Islamic Works of Art features masterfully crafted works of art from collections around the globe. Here, we are taking a look at a few highlights featuring in our forthcoming auction.

Highlights from our 14th May auction include works of art from collections from Germany, France, Taiwan, the United Kingdom and the United States. Featuring pieces from the neolithic period to the 19th & 20th century, the auction includes excellent examples of works of art, metalwares, jade, hardstone, glass, ceramics and paintings, as well as a curated selection of pieces relating to ancient scholars. We have selected a few pieces to highlight the fine craftsmanship of the works to be offered in our forthcoming auction. 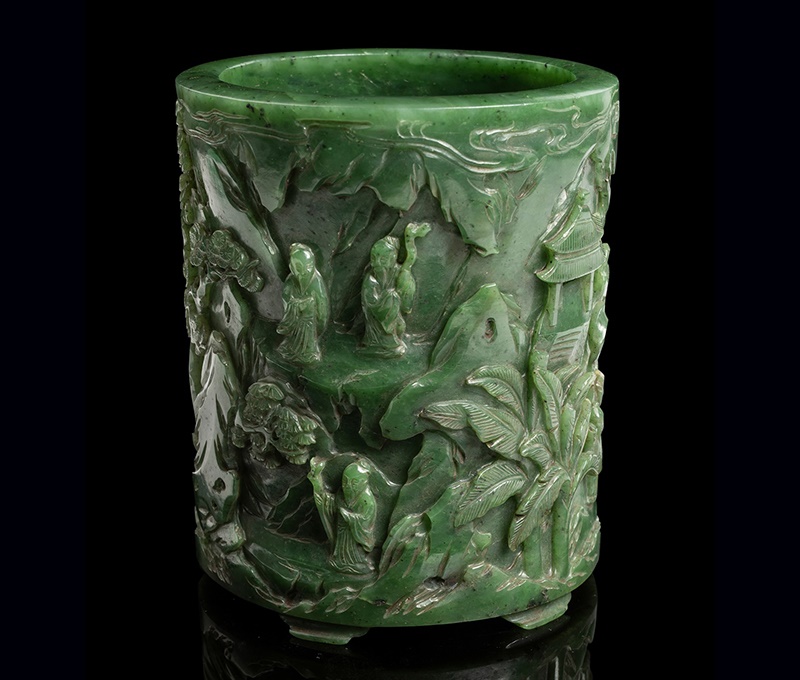 Robert Hatfield Ellsworth (July 13, 1929 – August 3, 2014) was a Manhattan-based American art dealer of Asian paints and works of art. His art collection is mainly found in museums in the United States. He was a supporter of architectural restoration in Huangshan, China and is an honorary Chinese citizen.

A closely related carved jade bixie, also dated to the Han dynasty in the Palace Museum, Beijing, is illustrated in The Complete Collection of Treasures of the Palace Museum, Jadeware (I), Hong Kong, 1995, p. 240, no. 201. Compare also to another bixie dated to the Western Han dynasty in the collection of the Xianyang Museum in Shaanxi province, illustrated in Zhongguo yuqi quanji-qin han, vol. 4, Shijiazhuang, 1993, p. 109, no. 148.

A similar pair which also bear Qianlong marks, illustrated in Elegance and Radiance: Grandeur in Qing Glass, The Andrew K.F. Lee Collection, Hong Kong, 2000, p. 296, no. 111. The style of carving of the ruby-red overlay to the snowflake ground is highly similar; another closely comparable white glass with red overlay vase, similarly with a four-character Qianlong mark and dated to the late 18th century, is in the collection of the Philadelphia Museum of Art, accession number 1925-27-93; a further comparable example was sold at Christie's Hong Kong, Live Auction 3322 on 28th May 2014, lot 3496.

According to the inscription, the Duke and Duchess of Kent referred to would be Prince George, Duke of Kent (1906 - 1968) and Princess Marina of Greece and Denmark (1906-1968), recorded visited Sarawak (then a British Crown Colony) in 1952, where she laid the foundation stone of the Cathedral of St. Thomas in Kuching.

Ren Huanzhang, actived in 1874-1902, an imperial painter in the late Qing court, famous for his shanshui landscape and sage-like figures, pioneered in the literati faction of painted porcelain.

Robert Cowan Marshall (d. 1935, fig. 1) was a Glasgow Industrialist and a contemporary of the shipping magnate Sir William Burrell and Kilmarnock lace tycoon Alexander Morton. Cowan Marshall purchased Bruntshields (fig. 2) in 1896 from the local horse dealers in Paisley, the Crawfords, where he continued his passion for both the Hackney Horse but also his love for collecting. Bruntshields was home to his treasures. An image from the ledger (fig. 3) made by Cowan Marshall would indicate that this large bronze sculpture was exhibited and purchased at the Glasgow International Exhibition of 1901 and the prices were what they cost.