Read on for a review of our October 2021 auctions including Design Since 1860, Lalique, The Wilhelmina Barns-Graham Collection and MODERN MADE...

Strong results for renowned artists and designers across our October series of art & design sales led by a record making drawing by Dame Barbara Hepworth reflect the demand in the market for remarkable and individual craftsmanship.

A drawing given by Dame Barbara Hepworth to her friend and fellow artist sold for a world record sum in our auction of The Wilhelmina Barns-Graham Collection. Selina Skipwith, Trustee for the Wilhelmina Barns-Graham Trust, described the £471,000* bid, more than double the previous auction record for a Hepworth drawing, as “a wonderful tribute to the friendship of two great women artists”. 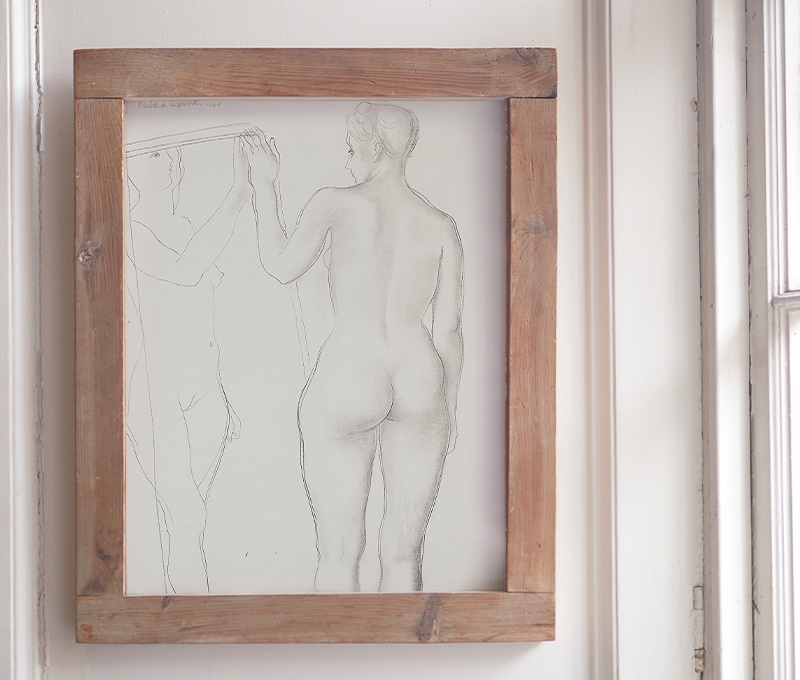 The two women had met shortly after Barns-Graham arrived in St Ives in March 1940 and began a friendship based partly on their shared experience of being female artists in the small Cornish town dominated by male artists.

Figure and Mirror, an exquisitely rendered 18 x 13½in (45 x 35cm) pencil and gesso on board drawing a female nude studying her reflection, was dated 1948, the year before Barns-Graham married the art critic, curator and writer David Lewis.

“We knew that this was a special work, and the more time we spent with it, the more we fell under its spell” said joint Head of Sale Charlotte Riordan. “The market clearly felt the same and it was fiercely bid over - a very dramatic saleroom moment. That the proceeds go to a good cause makes it all the better.”

A total of 72 works from the collection were offered at the Mall Galleries in London on October 28. The proceeds from the sell-out ‘white glove’ event will provide the funds the Wilhelmina Barns-Graham Trust needs to sustain its charitable programme.

In Barns-Graham's notes about her collection she states she was given her three works by the ‘outsider’ artist Alfred Wallis by friends: Mary Buchanan, Sven Berlin, and Ben Nicholson. She admired, as did many others in the St Ives enclave, the simplicity and directness of Wallis’ images and their lack of formality.

The work she received from Sven Berlin was a ‘thank you’ for the research she did on the Wallis family for Berlin’s book on Wallis. Titled St Ives Bay, this pencil and oil on board measuring 7.5cm x 30cm, came with a long exhibition history including the Wallis show at the Tate Gallery in 1968. It was deemed the best of the three works, selling at £52,500*.

Throughout the 1950s Barns-Graham developed her own abstract language and by early 1960s had turned away from landscape painting and based much of her art on careful arrangements of either squares or circles. The richly coloured oil Red and Violet from 1961 is one of the earliest examples of this new, hard-edged style. Inscribed, titled and dated to stretcher, it sold for £43,750*.

Attracting bidders from the UK and international marketplaces, the collection raised a total of £930,050. Rob Airey, Director of the Wilhelmina Barns-Graham Trust said: “I’m really delighted with how the sale went and want to thank everyone at Lyon & Turnbull for all their help. The sale will enable the Trust to continue its charitable programme and develop access to the collection.”

The Barns-Graham material provided the perfect foil to two other sales held across two busy days at the Mall Galleries. Lalique (also 28 October) was followed by the flagship Modern Made catalogue (29 October).

Head of Sale, Philip Smith described Modern Made as “a fabulous platform for showcasing art and objects by some of the best artists in the post war years and the sale goes from strength to strength. The current edition was no exception with busy footfall for the exhibition and international interest that led to exceptional prices”. The total was £850,000*.

It had been chance encounter with LS Lowry in the 1960s that had encouraged Bradley to create her own very personal style. Blackpool, the seaside town where her grandparents lived and where she spent her childhood holidays, provided the setting for some of her most memorable works. This 75cm x 94cm (29.5in x 37in) oil, complete with a handwritten narrative pasted verso, brims with all the fun of the seaside and the cast of characters that recur across Bradley’s works, including Miss Carter clad in signature bubble-gum pink. Its importance to Bradley’s oeuvre was reflected in one of the highest ever prices for the artist at auction. 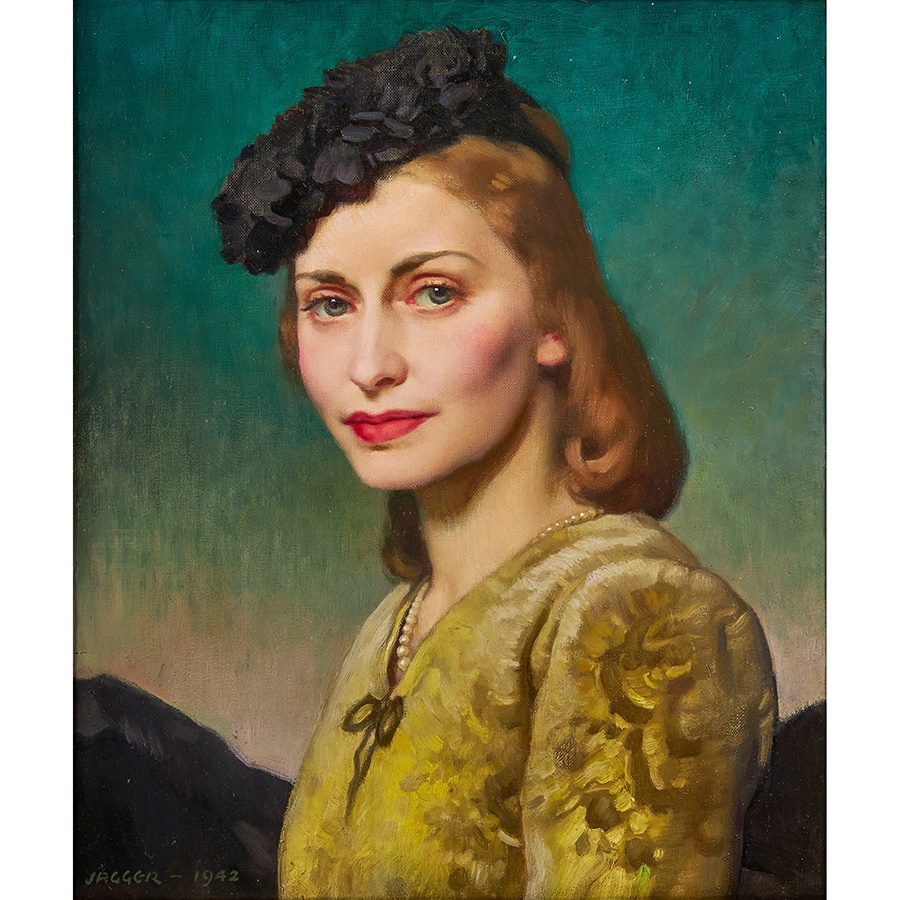 A wartime portrait of Thelma Bader, wife of the legendary pilot Douglas Bader, by David Jagger (1891-1958) sold at £23,750*. It was painted in 1942 - when Wing Commander Bader was a prisoner of war - as part of a series of portraits of female sitters designed to “reflect strength and fortitude during a time of adversity”. Most of Jagger’s portrait sittings were conducted in his Chelsea studio but it had been virtually destroyed during the Blitz so the portrait was painted at the Baders’ home in Bagshot, Surrey. It was reproduced as a cover image for the Women’s Journal magazine in May 1942 and later that year formed part of the joint summer exhibition held by the Royal Society of British Artists and the Royal Institute of OiI Painters at the Suffolk Street Galleries, London. It came for sale from a gentleman in Glasgow with an estimate of £7,000-9,000. 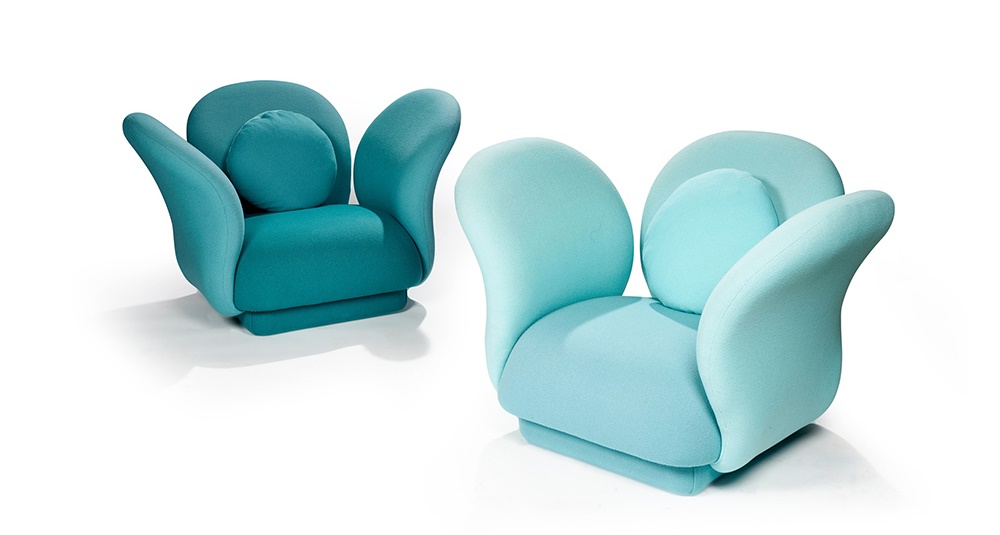 It is the blending of paints and sculpture with design objects from other disciplines that gives the Modern Made sales their unique signature.

Sating appetites for the best in post-war furniture were a pair of Multimo lounge chairs and a sofa conceived by Pierre Paulin (1927-2009) for Artifort in 1969. Paulin later recalled: ”At Artifort, I started using new foam and rubber from Italy and a light metallic frame, combined with ‘stretch’ material. Those new, rounder, more comfortable shapes were such a success that they're still being copied today.” Paulin-Artifort pieces were made in small numbers and only infrequently comes to the market. The sofa and the chairs, offered as two lots took £25,000* each.

Lalique glass has come to epitomise the glamour of the inter-war period. A splendid array of vintage pieces were topped at £100,000* by an example of the La Chasse chandelier. This relatively early design from 1913 fashioned in clear, frosted and grey stained glass is, at 150cm (59in) high by 113cm diameter, the largest chandelier René Lalique made. The use of multiple panels of intaglio, moulded, clear, stained and frosted glass provided him with a broad canvas upon which to work on the time-honoured subject of stags running through the forest pursued by dogs.

The advent of the electric light and its possibilities for the medium of glass appealed to a progressive designer like René Lalique: he had begun designing light fittings as early as 1902.

A distinct market subset are the series of car mascots or hood ornaments (bouchons de radiator) produced in the six years between 1925-31. With the aid of a metal mount and a light fitting, these could be fitted to the radiators of a luxury sports car and illuminated. The first of these was the Cinq Chevaux (five horses), ordered from Lalique by André Citroën for the launch of a new version of the 5CV at the Art Deco exposition in Paris. And example of this mascot in a clear and frosted glass with a slight amethyst tint sold for £10,000*.

Another sculptural piece, Groupe De Six Moineaux modelled as six sparrows in a row in clear, frosted and grey stained glass, sold at £8,125*. Designed 1933, it too could be illuminated via light fitments concealed in the base.

"We are delighted that the sale garnered interest from all five continents and saw some strong prices across the board. We are now looking forward to the Lalique scent bottle sale on 18 February in London,” said Senior Specialist, Joy McCall, Head of our Lalique auctions.

Another icon of French Art Deco - a patinated bronze serpent floor lamp by Edgar Brandt (1880-1960) - was among the highlights of the Design Since 1860 sale held in Edinburgh on 20 & 21 October. This celebrated design titled La Tentation was made in different sizes of which this is the largest. The mottled glass shade is made by the Nancy glassmaker Daum. As sought after today it was in the Roaring Twenties, it sold for £31,250*.

The sale was topped by a William De Morgan Moonlight and Sunset Suite pedestal bowl that took an extraordinary £32,500*. De Morgan considered pieces from the Moonlight and Sunset Suite series made in the early 1890s to be his very best work. The complexity of the process made them expensive even by the standards of the Arts & Crafts movement and they are uncommon on the market.

A bowl of this form is pictured in Martin Greenwood’s The Designs of William De Morgan (2007) while the central design of an owl and a mouse and a cat is known from tiles. It is signed with the initials FP for Fred Passenger. In the equivalent sale in April, a similar dish by Passenger decorated with a heron amid bullrushes sold for £16,250*.

However, at a moment when the art market is clearly waking up to the contribution of women in art history - few lots were more admired than a series of Art Nouveau pencil and watercolour jewellery designs by Frances Macdonald McNair (1873-1921). They date from c.1901-02, shortly after Macdonald had married Herbert McNair and moved from Glasgow to Liverpool to teach design classes at the university’s Art Sheds.

Very few examples of the jewellery she produced during this brief window appear to have survived. However a handful of original designs are known, including these four diminutive works which can be traced directly back through the family to Mrs C Armstrong, the artist's niece. They were last on the market in 1979 when sold by The Fine Art Society.

All were eagerly pursued by multiple bidders selling for between £6,250* for a design for a pendant on the theme of motherhood (Macdonald McNair’s son Sylvan was born in 1900) to £13,750* for a design for a turquoise and wirework gold pendant that was annotated with the manufacturing instructions ‘Please put on extra ring and fasten chain to pendant’.

“With strong bidding across the sale we are delighted with the near 80% selling rate. There were strong results for good examples of named designers work – Frances McNair again showing her star power and prices for outstanding William de Morgan pieces continue their upward trajectory. Four of the top ten prices in the sale were for furniture by the Cotswold maker Peter Waals, a reflection of the demand in the market for remarkable and individual craftsmanship,” said Director John Mackie.