Recognition was never an issue for Winifred Nicholson - she was born into an eminently political and artistically active family. She exhibited regularly and sold consistently – but the interpretation of her career has been somewhat blighted by her status as the ‘first wife of Ben Nicholson’. It is only in recent decades that her valuable contribution to 20th-century British art has been evaluated in an individual sense.

Hitting her artistic stride and finding her niche by the mid-1920s, her work has a rare focus and strength of personality. She is now seen as pivotal to her husband’s development of the use of colour and echoes of her technique - the purity of colour, the freedom of form – can be detected in the work of artists she frequently worked alongside such as Ivon Hitchens and Christopher Wood.

Nicholson’s work was thematic but never repetitive. Her most common compositional device was that of the informal still life arrangement set before a panoramic landscape - the work presented here being a typical example. Her work is deceptive – it couldn't be described as naïve but instead it fluidly articulates and is highly dream-like as opposed to being overtly realistic. It is emotionally evocative rather than light-heartedly simplistic. There is a sense that her paintings contain much of herself. The parameters of the interior and exterior of the scene are blurred, as too are the parameters of what the artist sees and what she feels.

Nicholson described this in a letter to her daughter Kate, the same year this picture was painted: “… that is where I always paint the sky – in between me and the horizon … All painting is to me painting of air and sky – that holds colours and light – not pictures of objects.” 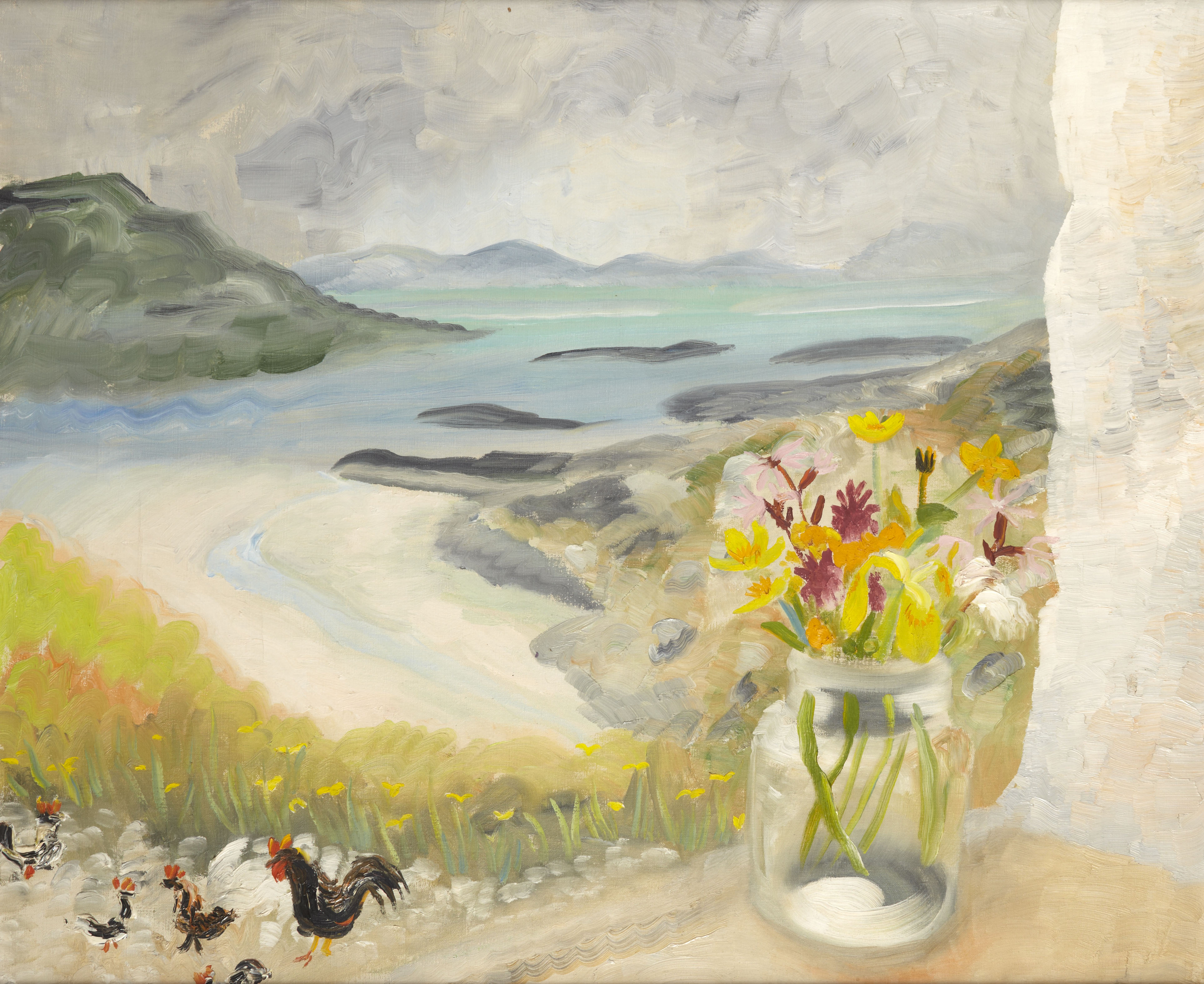 The foreground and horizon are typically merged here, anchored by the strong yellows and aquamarines in the middle of the composition. A keen colour theorist, Nicholson’s fascination with the quality and play of light led her to visit the west coast of Scotland on an almost annual basis for many years. Here she found the northern light pleasingly crisp and silvery, slanting through objects as opposed to simply falling directly upon them. Though stylistically a modernist, Nicholson felt that ideologically she was working within the romantic tradition. The folklore of the Hebridean islands and the timeless lifestyles of the inhabitants struck a chord, enhancing the ethereal element within her work. Her happiness during her time in Scotland is tangible in Cheeky Chicks (1951), painted on a trip to the remote island of South Uist where she stayed with a local crofter and his family. Various dogs, cats and livestock roamed about the yard and it was a battle to keep them from entering the cottage. Here Nicholson humorously captures a family of scruffy black hens fleeing the scene having made one such an attempt.

An important work, it contains all of her quintessential elements and encapsulates the virtuosity of her middle period. A favourite among curators and academics for many years, it was a star picture in the National Gallery of Scotland’s 2003 exhibition of Nicholson’s Scottish paintings and was additionally featured on the cover of the catalogue for her 1987 retrospective at the Tate.