Bold design was a feature of our recent Select Jewellery & Watches auction on 03 May in London.  Here specialist, Kate Flitcroft, introduces us to two of the key designers represented.

As former jewellers to the court of Ludwig II of Bavaria, the Polish Kutchinsky family had its roots in the jewellery trade. Fleeing Poland in the 1890s, Joseph Kutchinsky’s grandfather moved to London with his family, and started the Kutchinsky jewellery shop in the East End.

Joseph Kutchinsky, commonly known as ‘Joe’, was born and raised in London. In training from his father and uncle, he left school at the age of 14 to work in the family jewellery business. Learning from the bottom up, he quickly became an experienced diamond polisher, and was promoted to overseeing the production of diamond and platinum watches. Joe Kutchinsky, a natural salesman, knew the importance of offering good client service and high quality jewellery to customers, and the cornerstones of the family business were set in place.

Lot 79 | A pair of 18ct gold diamond set earrings, Kutchinsky
each of stylised star-burst design, with textured ground and set at intervals
with trio's of graduated round brilliant cut diamonds,
signed to clip fittings, in a black leather box for Kutchinsky, London. Width: 34mm
Sold for £2,500 (buyer's premium included)

Shortly before being called to serve his country in WWII, Joe met the love of this life and married in 1940. After his return from the war, Joe began to rebuild the family business. Two sons were born, Roger in 1945 and Paul in 1950, who would ensure the legacy of the business. Post-War, the Kutchinsky brand truly started to flourish, pioneering the use of platinum in fine jewellery.In the late 1950s, the business moved to the commercially thriving and wealthier client-base of London's Knightsbridge. Once Roger and Paul Kutchinsky completed their education, they joined their father in the family business.

In 1989, Roger and Paul would take the reins, as their father steps down to take care of his ailing wife. Unfortunately, following the boom in popularity in the Middle East, the Gulf War cost the Kutchinsky business most of its important customers and the business was sold to Moussaieff Jewellers Ltd in 1991. Joe Kutchinsky passed away in 2000 and despite the takeover, the Kutchinsky boutique store on the Old Compton Road in Knightsbridge still remains.

‘Nugget flakes’, ‘wavy rods’, and ‘drum or crown mounts’, are signature techniques synonymous to the 20th century jewellery game-changer, John Donald. Born in Scotland in 1928, John moved to London to attend the Royal College of Art.

As a struggling designer, he worked with more affordable gold rods, experimenting with melting gold in water. His different techniques for making contemporary gold jewellery, was both geometric in motif, and organic, fluid-like in texture. His jewellery pieces are known to be three-dimensional, decorative designs of yellow gold, openwork patterns, and occasionally set with gemstones. 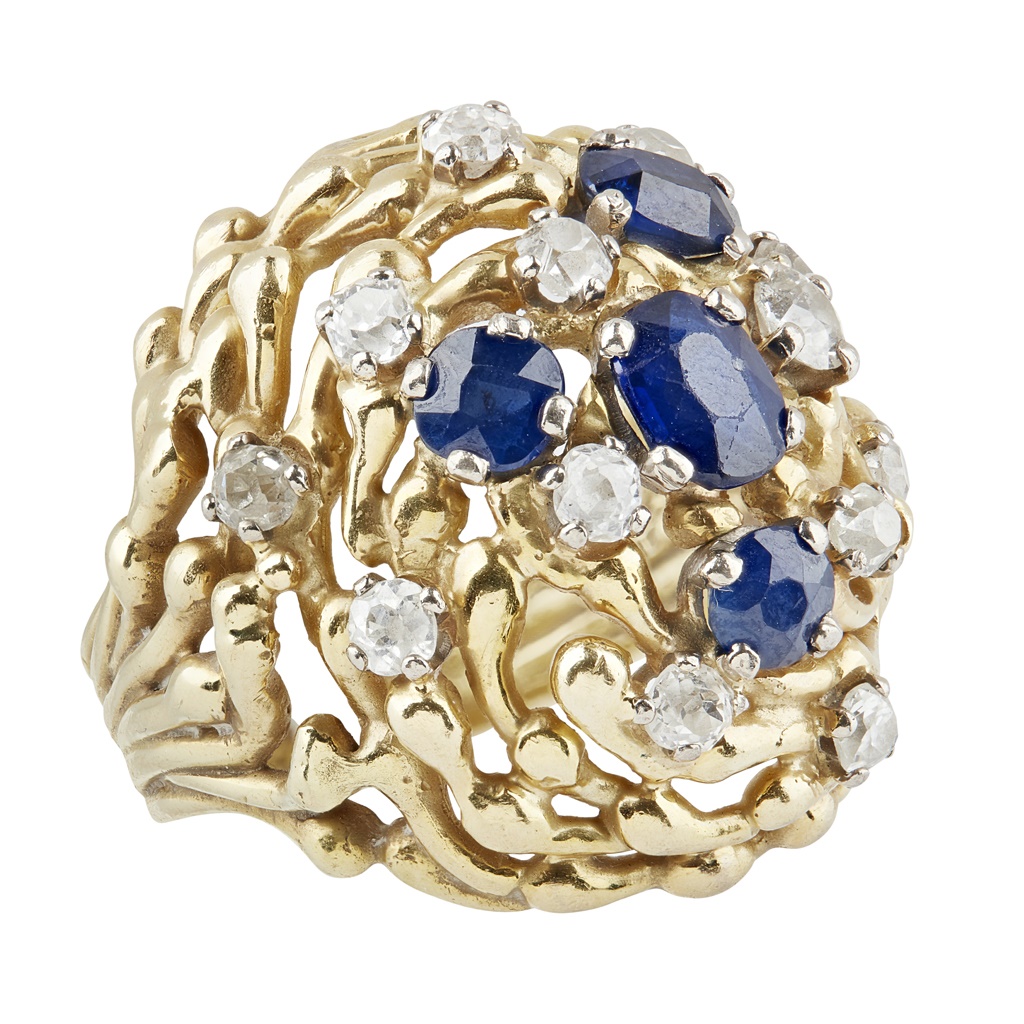 Donald's techniques and gemstone choices, nuanced his fascination with light, and its play on different textures of gold. His experimentation was joined by a string of fellow jewellery contemporaries, such as Andrew Grima. After WWII, these artists shook up tradition and brought creativity back to the forefront of their field. As Donald states, in the 1960s there was a "hunger for new designs". As a result, his contrasting and dramatic pieces were favoured by critics and fashionable women alike, including H.R.H. Princess Margaret.

Lot 78 | A pair of 1970s 18ct gold sapphire and diamond set earrings, John Donald
each of domed, pierced textured design, set throughout with graduated round brilliant cut diamonds,
and oval and round cut sapphires, to post and clip fittings. Length: 24mm
Sold for £2,375 (buyer's premium included)

Constantly travelling overseas throughout his career deemed successful for building up his international profile as well. Especially in the Middle East, John was one of the first jewellery designers to become inspired by the mecca of colours and light, prompting him to work with bolder colours. In turn, his international business soared even further throughout the 1970s.

John Donald's designs and craftsmanship can be seen in the collections of the V&A Museum, the Schmuckmuseum in Pforzheim, the National Museum of Scotland, and the Worshipful Company of Goldsmiths. His jewellery pieces are owned by various Royal Families, heads of industry, and other design collectors.