From the Studio of Bet Low

We are pleased to present for sale, in our 18 April Modern British & Contemporary Art auction, the studio contents of Bet Low. Sold now on behalf of The Bet Low Trust, a registered Scottish charity set up by the artist in 1994 and continued, since her death, by a committee. The Trust awards scholarships to students or practising artists in Scotland in the fields of drawing or painting.

These fascinating works from her studio tell a story of two of Scotland’s distinct faces; from the streets of post-industrial Glasgow, to the cliff edge of our farthest flung isles. These works also reveal to us the dual preoccupations that drove her as an artist; from her politicised roots and deep engagement in the artistic community, to her meditative, almost spiritual connection to the Scottish landscape.

Low was born in 1924 in Gourock, a town at the mouth of the River Clyde. In 1942, she enrolled at the Glasgow School of Art. Here, whilst training under teachers like David Donaldson and Benno Schotz, she befriended contemporaries including Joan Eardley and Ian Hamilton Finlay, as well as influential émigré artists Josef Herman and Jankel Adler, whose studio she eventually took on. Like Eardley, Low followed up her diploma with a formative residency under James Cowie at Hospitalfields, Arbroath. 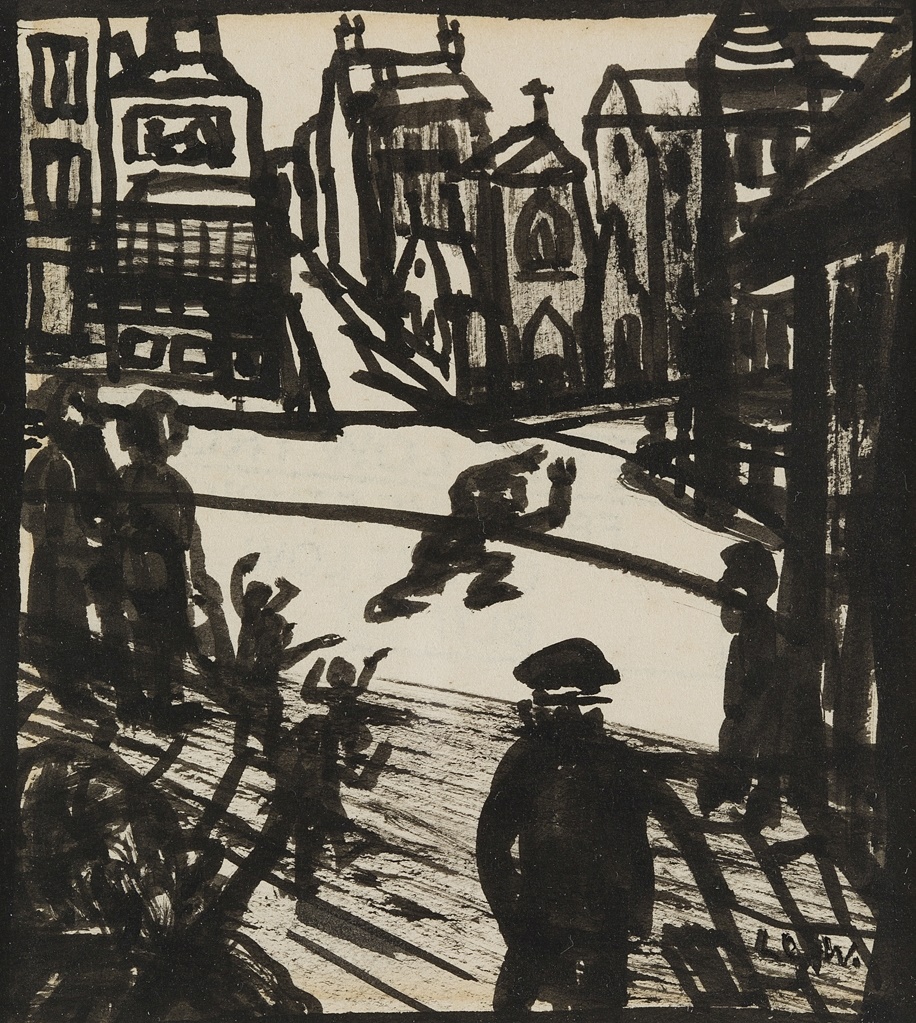 Also in common with these peers, Low possessed a single-minded focus towards her art practise that meant she only briefly entertained the idea, as many artists do, of becoming an art teacher. Instead she resolutely pursued an independent artistic career, starting by immersing herself in the creative community of Glasgow’s Unity Theatre. Here she painted and designed sets, illustrated periodicals and depicted the theatre’s characterful members of cast and crew, some of whom are featured in the portraiture shown here. The theatre shared the same building at the Refugee Centre, which proved influential on Low’s developing socialist ideologies. Though quite literally freezing in the proverbial bohemian garret during this time, the single-minded Low was in her element.

Over these formative years, Low fostered an enduring love of philosophy, politics and progressive discussion. In 1946 she joined the Clyde Group of Writers and Artists, whose manifesto sought to bring art and poetry to the masses, via a proactive series of exhibitions and events.
It was during this period that Low produced the bold, expressionistic ink drawings and linocuts of a Glasgow that has since disappeared. They remain remarkable snapshots of social history; depicting markets, street protesters and sooty tenement backcourts.

Later, the ever industrious Low set up The New Charing Cross Gallery in the early 1960s with fellow artist John Taylor. They invited art lover and collector Cyril Gerber to its board, who of course went on to found the Compass Gallery which carried on their good work, and continued to promote Low and her peers. Both galleries had finally provided a much needed platform for the city’s more progressive artists.

The 1960s also coincided with serious exploration into the field of abstraction. These works - sometimes monochromatic and later moving into tonal experimentation - convey a sense of movement, be they natural forces; perhaps water or air, or metaphysical; like the pulse of a music wave.

Low is best known for her atmospheric depictions of the Scottish landscape. She was especially interested in capturing and conveying the play of light as it traverses landforms and bodies of water. Above all, these works convey the transience of experience; evoking the sensation of a breeze on the face, a mizzle of mist on the skin, the sense of wonder felt when the light slants through a cloud ‘just so’, creating an effect so simply stunning it bonds itself to our memory.

Much of her best work in this area was painted in Orkney. While there, she became the friend of the poet George Mackay Brown, their connection unsurprising given the sense of the poetic that permeates her own work. Together they collaborated on ‘poem paintings’, celebrating the beauty of the Orcadian landscape.
Though critically regarded, loved by the canniest collectors of Scottish art, and increasingly on the radar of the next young generation of artists, Bet Low remains something of a well-kept secret; her market as yet failing to reflect her standing in the story of Scottish art. This is beginning to change, with prices notably and deservedly beginning to spike upwards in the last couple of years.

This sale represents the opportunity to invest in both classic examples of her mature style and scarcer, early material from her atelier which positions her in the heart of an exciting period in Glasgow’s artistic history.

A last word from her friend and supporter, the critic Cordelia Oliver, “It still seems to me that few other painters in Scotland have been able to pursue a line of visual thought so purposefully and relentlessly without tedious repetition”.

An apt description which, curiously, can’t help but put one in mind of some of Low’s more celebrated contemporaries, Eardley and Hamilton Finlay.