Kicking off our latest series of articles focussed on Modern Makers, our Modern Design Specialist, Philip Smith takes a look at the work of post-war furniture designers that have transformed the sphere...

In the first of a series of articles focussed on Modern Makers, our Modern Diesgn Specialist, Philip Smith takes a look at the work of post-war furniture designers that have transformed the sphere, and pushed the limits of their chosen material keeping British design at the forefront of international attention and significance.

Ernest Race was a fabric and furniture designer, and one of a wave of new modernist designers that came to the fore after the end of the Second World War. After studying interior design at the Bartlett School of Architecture, he found employment as a model maker and lighting designer, before setting up Race Fabrics, to sell handwoven textiles and carpets in the years immediately before the war.

However, it was his formation of Ernest Race Ltd. in 1945 and the success of his first design for the company, the ‘BA3’ dining chair, at the 1946 Britain Can Make It exhibition that launched his career nationally and internationally. They combined a lightness and elegance, that saw over a quarter of a million examples of this chair produced between 1945 and 1969, and Race was awarded a prestigious gold medal at the Milan Triennale in 1954 for his design. Following on from this he created the ‘Springbok’ and ‘Antelope’ chairs, used at The Festival of Britain in 1951 and the ‘Unicorn’ chair for the British pavilion World Fair in Brussels in 1958.

The demand for his furniture soon took off and he was commissioned by the likes of Lyons teashops and the P&O shipping company, alongside retailers Heals. Over his career Race was awarded three ‘Design of the Year’ awards by the Design Centre, a reflection perhaps of his philosophy that it was important not to merely copy a design from one material to the other, but to exploit the material to its full potential.

Robin Day was considered one of the most significant British designers of the 20th Century, with a career that lasted seven decades. He trained as a furniture and industrial designer at the Royal College of Art in London, where he met his wife the furniture and print designer Lucienne Day.

Day came to the fore after winning the Chartered Society of Designer’s Minerva medal at The Festival of Britain in 1951. After the austerity of the Second World War, he believed in the influence that modern furniture and design could have on people’s lives to uplift and make the world a brighter and better place. He dedicated his career to producing and designing low-cost, but ‘high tech’, mass produced furniture for a wide public.

Day’s designs were often lightweight, trimmed down, and had a modern and elegant feel to them, in a sharp contrast to the solid and heavy furniture of the pre-war years. His 1963 Polypropylene chair produced by Hille, fulfilled all these criteria and was an international hit, spawning countless copies.

He went onto create many iconic designs - the 675 armchair, slatted bench and Avian series to name a few - and for decades many of his designs held prestigious positions in Tate Britain, the auditorium of The Barbican and in London Underground due to their durability, comfort and style.

Eileen Gray (1878-1976) was one of the first women to be admitted to the Slade in 1898, where she took up painting before undergoing an apprenticeship in a London lacquer workshop. Upon moving to Paris in 1902 she gained further experience in lacquer work and cabinet making, quickly establishing herself as one of the leading designers of the lacquered screens and decorative panels key to Art Deco interiors.

In 1922 she opened her own gallery, Jean Désert, in Rue du Fauborg Saint Honoré as an outlet for her designs. In the following decades she became one of the leading exponents, alongside Le Corbusier and J.J.P. Oud, of revolutionary new theories of design and construction. Well to the fore of the group she exhibited chrome, steel tube and glass furniture in 1925 - the same year as Mies van der Rohe and Marcel Breuer and well before Le Corbusier.

The Transat lounge chair, designed in 1927 for use on the terrace of Gray's house E1027 in the south of France, takes as its starting point the deckchairs of transatlantic steamship travel. 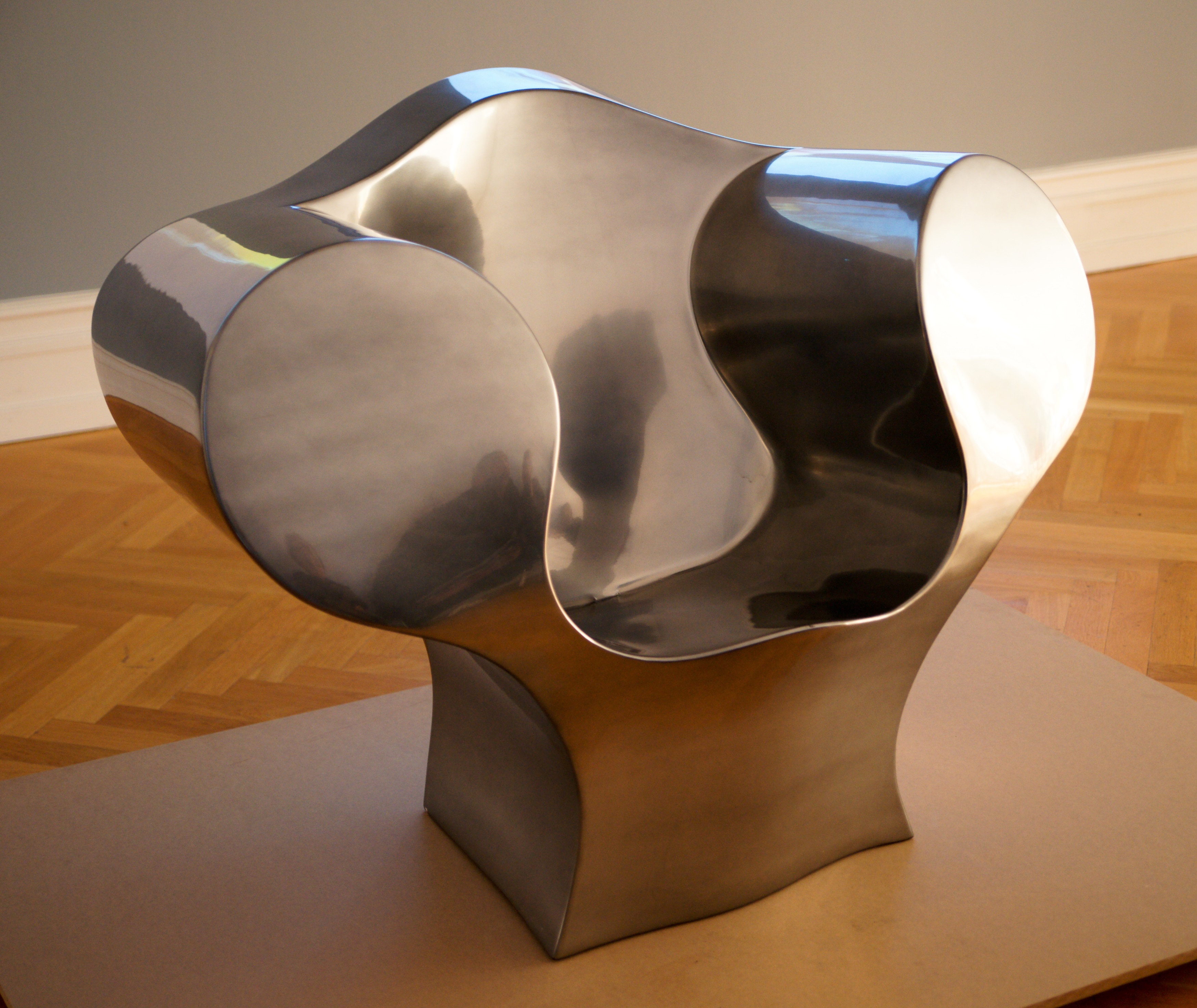 Ron Arad is a British-Israeli industrial and architectural designer, who was educated at the Bezalel Academy of Arts and Design in Jerusalem from 1971-3, before moving to the Architectural Association School of Architecture in London from 1974-9. In 1981 he founded the iconic design and production studio One Off, originally in Covent Garden, with Caroline Thorman where design classics such as the Rover Chair – a leather Rover p6 car seat mounted on a tubular steel base – were created. Ron Arad Associates was formed in 1989, followed by Ron Arad Architects in 2008.

Arad is known for is constant experimentation with the boundaries of materials, whether metal or plastic, and his exploration of the structure of objects, furniture and buildings, which has pushed the boundaries of design with a radical reformation of form. His preoccupation with curves and form are seen in a number of his iconic furniture designs including The Big Easy Chair, Voido Rocking Chair and Bookworm Bookshelf, which has led him to design for the majority of international furniture design brands including Vitra, Alessi, Kartell and Cassina.

From 1997 to 2009 he was professor of furniture and industrial design at the Royal College of Art in London, in 2013 was elected a Royal Academician and was also awarded the prestigious title of Royal Designer for Industry in recognition to his ‘sustained excellence in aesthetic and efficient design in industry’.

Tom Dixon’s early career parallels that of Ron Arad, the son of an English father and French/Latvian mother, who moved and grew up in the UK from the age of four. He embarked on a course at the Chelsea School of Art in 1979 that lasted only six months, and from this point was largely self-taught.

He rose to prominence in the mid-1980s with ‘a line of welded salvage furniture’ and setting up Creative Salvage alongside Nick Jones and Mark Brazier-Jones as a creative thinktank, shop front and to set up exhibition of ‘Stylish and functional artefacts for home and office’ in Kensington Church Street, London. By the late 1980s Dixon had moved on stylistically, influenced by designers like Andre Dubreuil, and created pieces such as the iconic ‘S’ chair for the Italian manufacturing giant Cappellini. It was a turning point in his career, and set Dixon on a course for wider appreciation and a mass-market.

By the mid-1990s he launched his Jack Lights, polyethylene ‘sitting, stacking, lighting thing’ through his own company ‘Eurolounge’, becoming the first designer to fully exploit the material for furniture and lighting. The Jack Light soon gained wider significance, and triggered a wave of furniture in this material by other manufacturers.

Dixon’s successes at Eurolounge led to his appointment as head of design at Habitat, later becoming Creative Director that lasted for a decade. In 2002 he also set up his own brand Tom Dixon which holds an important position in cutting edge design to this day, and many of his designs now feature in major design collections around the world including New York’s Museum of Modern Art and The Victoria and Albert Museum in London.

A leading auction house in Modern, Post War and Contemporary Design, we hold specialist live and online Design auctions in London and Edinburgh that are known for their international reach and strong prices.

The sales cover all the major movements from Pre-War French and British Modernism and Art Deco, to works from the Mid-Century and Post-War, including Italian and Nordic Design, European and American Modernism, Studio Craft through to Contemporary Design, Glass and Studio & Contemporary Ceramics.