Our next Fine Furniture & Works of Art auction on 31 January 2018 will include a magical section of Victorian magic lantern slides.  Antiques specialist, Theo Burrell, takes a closer look at their history and long-standing appeal.

Magic lanterns are one of those wonderful inventions that conjure up images of Victorian audiences sitting in dark rooms marvelling at the scenes and spectacles projected for their entertainment. The precursor to the ‘moving picture’, the images contained on the glass slides could be amusing, frightening, educational and in some cases mechanically complex.

The use of light to produce images had been used since Roman times and perhaps earlier, but it was not until the 15th century that the first recorded use of a device to project an image was mentioned in Giovanni de Fontana’s Liber Instrumentorum. Later in the 17th century Athanasius Kircher, a German Jesuit priest, published Ars Magna Lucis et Umbrae, and discussed methods for image projections with the use of a convex lens. Further interest and advancement in optics in the 18th century led to the development of the magic lantern as we currently know it.

During the 18th century a whole industry emerged to create lanterns and their accessories. Advancement in the science of lenses, mirrors and light sources ensured that better projections were produced. One such use of this improved technology was for ‘Phantasmagoria’ shows whereby travelling showmen, such as the Belgian Etienne Gaspard Robertson, displayed terrifying scenes of ghosts and ghouls to scare and thrill audiences. In the early 19th century slide projections were also used for moral and educational purposes: ‘Galantee’ or ‘Savoyards’ toured the country telling Biblical stories, or recounting current affairs, with the use of slides.

Further innovations in the 19th century saw magic lanterns entering the home as they became cheaper to produce and therefore more affordable to the middle and upper classes. The 1870s and 1880s saw a flurry of lanterns hit the market to provide projections for all sorts of occasions, big or small, and by the end of the century more than thirty companies produced lanterns in London alone. Lanterns ranged from simple domestic devices to elaborate large format projectors for theatrical extravaganzas accompanied by musicians and sound effects.

Fierce competition between makers also ensured that a large variety of slides were created for new audiences. As early as the 17th century debates arose around creating a ‘standard’ size of slide, an argument which was never fully resolved, as many different sizes and shapes exist today. Examples of the variety include panorama slides, slipper slides, lever slides, rackwork and pulley slides, all creating different illusions or scenes. The entertainment of a slipper slide would not have been lost on 19th century audiences, as a sheet of glass is pulled away to reveal a hidden object. Similarly, the movement and colour displayed by chromatrope slides, akin to kaleidoscopes, are still very captivating to watch as the pulley handle rotates and the shapes move in sync. 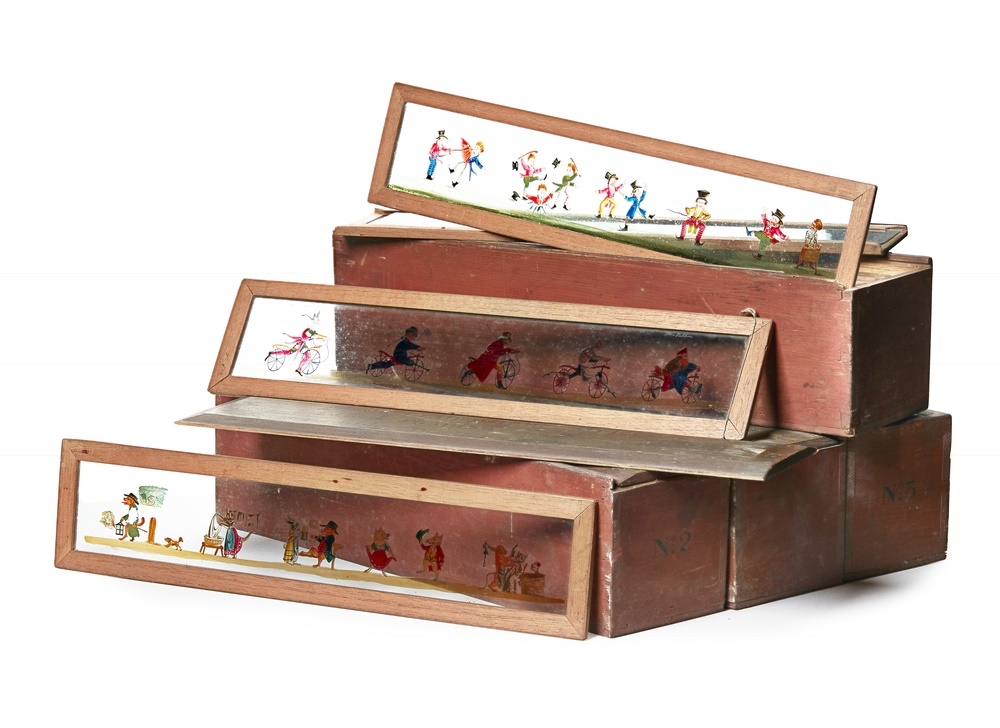 The increasing influence of motion pictures resulted in a decline in the popularity of the magic lantern for public entertainment in the 20th century. Slides and slide projectors were relegated to educational purposes or for domestic use with the invention of the 35mm film slide. From the 1950s many homes had slide projectors to show off holiday pictures and special events to gathered friends and family, and idea that seems as quaint to us today as the thought of the magic lantern shows of the 19th century.
Included in the Fine Furniture & Works of Art auction on 31st January, are two lots containing magic lantern slides, including slipper, pulley, and rackwork examples, depicting wizards casting spells and water wheels churning flowing rivers; as curious and enchanting today as they were in the 19th century.

Date for your Diary