Widely considered to be one of the most important British sculptors of the twentieth century, Lynn Chadwick often heralded as the successor to Henry Moore. In April 2021, we were delighted to present two sculptures by Chadwick in our Spring edition of MODERN MADE: Modern Art & Post-War Design.

Born and raised in London, Chadwick did not have any formal art education and began to transfer his experience as an architectural draughtsman to his sculptures from the end of World War II, during which he served as a pilot. In 1956, a few years after he began to cast in his iconic bronze, Chadwick’s career received immense acclaim when he won the International Sculpture Prize at the Venice Biennale, surpassing the noted favourite Alberto Giacometti and becoming the youngest ever recipient of the prestigious prize.

In 1971, he opened his own foundry at his estate at Lypiatt to produce small bronzes and jewellery. Known for his keenness to blur the lines between abstraction and figurative work, from 1973 we note a development in his bronze figures as they begin to be clothed in sumptuous drapery, adding a mysterious and elusive quality to them. These cloaked, figurative pieces became an important part of his oeuvre in the 1970s and into the 1980s and remain instantly recognisable, as he pushed the boundaries between abstraction and naturalism. 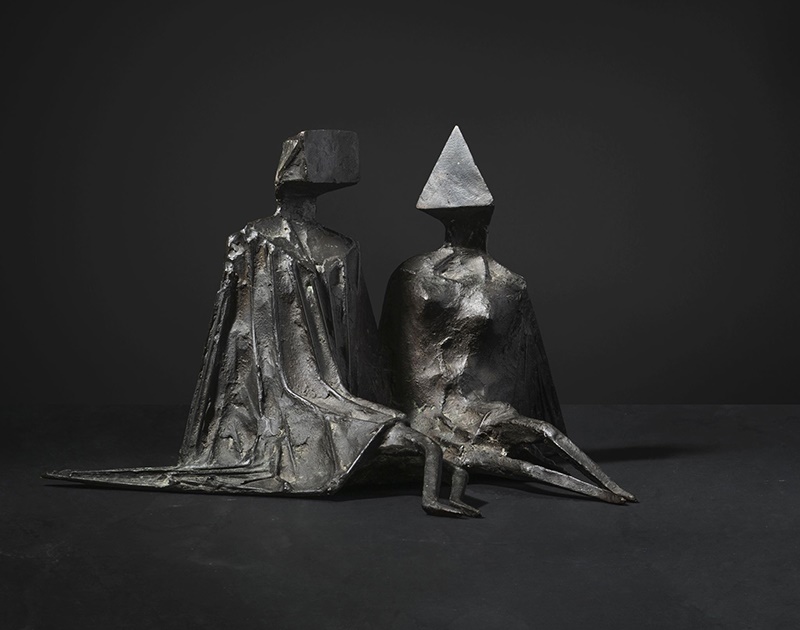 Chadwick’s exploration of seated figures in the early 1970s, such as Sitting Couple from 1975, marks an important development in his work. Always a keen observer of human movement, his figures are more elongated and elegant as they become more erect, in contrast to his earlier works. In a book on the artist’s life, his wife Eva Chadwick discusses the importance of movement in his work with art historian Dennis Farr:

“Chadwick has always been intrigued by movement, either actual or implied, in his sculpture. From his early mobiles to his dancing Teddy Boy and Girl series of the 1950s to his cloaked walking women with windswept hair of the 1980s, he has explored figures in motion. Sometimes their cloaks and draperies flow out in the wind from behind them, or are caught by a gust and wrap themselves around the figures. This essentially lateral progression gives place to a vertical rhythm in his groups of, usually two, figures.”
(D. Farr & E. Chadwick, op. cit., 2006, p. 15).

5/9, signed with initial, numbered and inscribed '789S', bronze with black patina and polished

However, the importance of mass remained paramount to these groupings in the way in which the couple join to become one solid unit. This abstraction of form and elegant elongation continued towards the 1980s, which is visible in works such as Standing Couple from 1980. The long, fluid cloaks which shroud the couple add to the visually joining of the figures as one, all the while maintaining Chadwick’s signature signifier of maleness (oblong head) and femaleness (triangular head) to contextualise the couple.

Figures from this period of Chadwick’s work represent his artistic maturity and allow the viewer to import their own narrative on these anonymous figures. Like the artist’s larger outdoor sculptures, these works have an eminent presence and command the attention of those around them due to their imposing form and mysterious essence.

We would like to thank Sarah Chadwick for her assistance in cataloguing the current work.