The Boy Who Never Grew Up

In 1910 Sir James Barrie (1860-1937) commissioned the artist Sir George Frampton (1860-1928) to produce a statue in bronze of his famous literary creation Peter Pan. Frampton was a leading figure in the New Sculpture movement of the late 19th century, a movement which endeavoured to move away from the confines of the “frozen neoclassicism” of traditional sculpture to more dynamic and energetic forms, often with mythological or exotic subject matters. 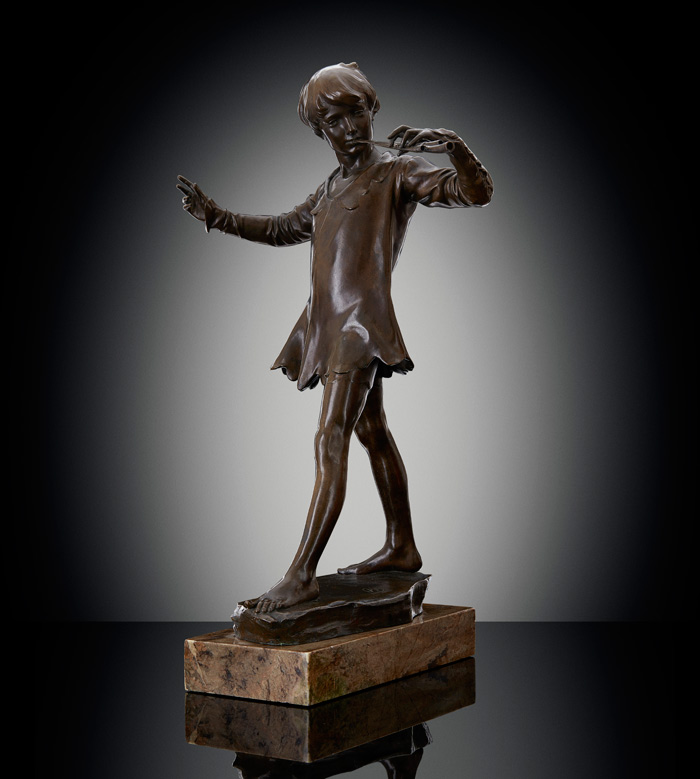 The sculpture which Frampton produced took its inspiration from a series of photographs taken by Barrie in July 1906, the same year Peter Pan in Kensington Gardens was published. These photographs feature Michael Llewelyn-Davies, who, along with his brothers, were the original inspiration for the characters. Davies can be seen wearing the costume for Peter Pan which was designed for the play by William Nicholson (who also designed the scenery), and which was to become an essential part of Peter Pan’s identity. In fact, the photograph of Michael wearing the costume became the ideal image of Peter Pan in Barrie’s eyes. 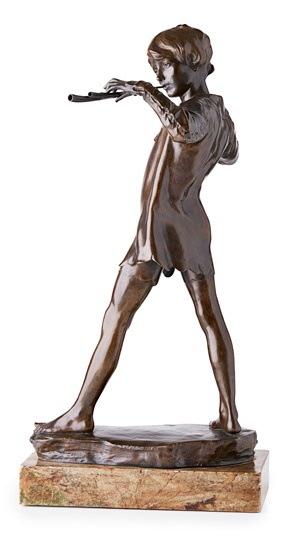 The completed bronze was exhibited by Frampton at the Royal Academy in 1911 and the following year Barrie arranged to have the statue erected in secret on the 29th and 30th of April in Kensington Gardens, in order that the statue appear as if by magic on May Day, with only a brief announcement in The Times newspaper by way of any publicity;

'There is a surprise in store for the children who go to Kensington gardens to feed the ducks in the serpentine this morning. Down by the little bay on the south-western side of the tail of the Serpentine they will find a May-day gift by Mr J.M. Barrie, a figure of Peter Pan blowing his pipe on the stump of a tree, with fairies and mice and squirrels all around. It is the work of Sir George Frampton, and the bronze figure of the boy who would never grow up is delightfully conceived.

Men were engaged on Monday and yesterday in placing the work of the sculptor in position behind drawn curtains. These will be removed during the night, and the children will just find Peter Pan there as if he had grown out of the turf on May morning. It was the wish of Mr Barrie and of Sir George Frampton that there should be no formal unveiling and the Office of Works fell in with a happy idea.'

The statue was unveiled to great success and, as a result of its popularity, a small number of bronze reductions were produced during the artist’s lifetime up to 1925, of which the current figure is an early example. In addition to creating numerous other public statues and memorials, a further six life-sized casts of Peter Pan were publicly erected in Europe, Canada, and the US, testament to the popularity of the statue, and to the character of Peter Pan, well-loved to this day as the boy who never grew up.