In the 1890s, Peploe and Cadell studied at L’Académie Julian in Paris and Fergusson travelled to France, Spain and Morocco. From 1904 Peploe and Fergusson made regular trips to France, painting together at Dieppe and the fashionable bathing resort of Paris-Plage near Etaples.

Fergusson was the first to move to France, taking on a studio on the Boulevard Edgar Quinet in 1907. Many of the works from this period are on small panels which could easily be transported around the streets of Montmartre where he mingled with many of the most significant artists of the day. His works from the period capture the café and music hall society of fin-de-siècle Paris and the elegant seaside towns of Dinard and Etretat in Brittany and Normandy.

In 1910 Peploe joined Fergusson in Paris, taking a studio at Boulevard Raspail. Later that year both artists were painting at Royan on the west coast of France from where they (or at least Fergusson) visited St. Estèphe, St Palais and Saintonge. The following year Peploe visited Ile-de-Brehat and Berneval, near Dieppe.

In 1913, Fergusson, Anne Estelle Rice, Peploe and his family made the trip south to the Mediterranean sun of the Cote d’Azur. Perhaps taking the example of Paul Signac, they made for Cassis, a small fishing town near Marseilles. From here they visited Antibes, Juan-les-Pins and Thorenc. Fergusson particularly embraced the sun, sea and relaxed outdoor lifestyle. 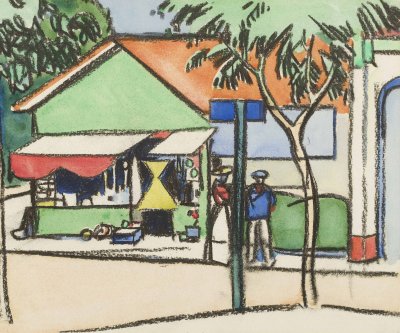 Despite having studied in Paris (1899-1902) and living Munich (1906-1908), it was not until a trip to Venice in 1910 that Cadell embraced colour and light. Regular summer trips to Iona from 1912 more or less satisfied Cadell’s travel requirements – finding the light on the West Coast of Scotland surpassed any other location. Not until 1923 did Cadell venture to Cassis in the South of France, following Peploe’s recommendation.

In the late 1920s Hunter rented a studio adjacent to the Auberge de la Colombe d’Or in the hilltop village of St-Paul-de-Vence from where he wrote; ‘I like this country very much and am sorry I did not come here six years ago… This is a painter's country. (T. J. Honeyman, Introducing Leslie Hunter, p. 119). He travelled around the Côte d’Azur, painting at Marseilles, Antibes, Toulon, Juan-les-Pins and St Tropez. He used St Paul de Vence as his base and although he made sojourns along the coast and inland, he always returned to Vence.