The Act Anent the Cleansing of the Streets of Edinburgh

A Commentary from Simon Vickers

Head of Rare Books, Maps, Manuscripts & Photographs, Simon Vickers, shares his views on how Edinburgh Council took to action in 1687 to determine the best means of keeping the town clean in their Act Anent the Cleansing of the Streets of Edinburgh.

Things have come on a long time since Edinburgh Council's 1687 Act Anent the Cleansing of the Streets of Edinburgh. Considering Edinburgh Councils current efforts to improve recycling targets, it is interesting to see the issues addressed and actions taken by the Council in 1687. Lot 248 in our 02 February auction of Rare Books, Manuscripts, Maps & Photographs comprises 3 rare broadsides relating to Edinburgh Council.

The Act Anent the Cleansing of the Streets of Edinburgh, enacted on March 30, 1687 states that the Magistrates have determined the best means of keeping the town clean. The new laws require that each family should provide ‘sufficient vessels in their houses for holding their Excrements and foul Water, at least for Fourty Eight Hours’. On top of which they were prohibited from ‘discharging any kind of filth to be casten out of Doors’ and in particular for ‘any Filth in Chamber Pots, or Water, to be casten over the Windows’ – either out of the front of back of the house, under the pains of being fined Four Shillings Scots to be paid by each Family of the Tenement. This was clearly to ratchet up pressure on all the inhabitants. A single pot of excrement thrown out of a single window would result in all families within the tenement being fined! Moreover if it was suspected that any window had been used for such a purpose the Council could order the window to be boarded up. In a dimly lit tenement building such action would leave the inhabitants in the dark with their filled up chamberpots – not a pleasing prospect! 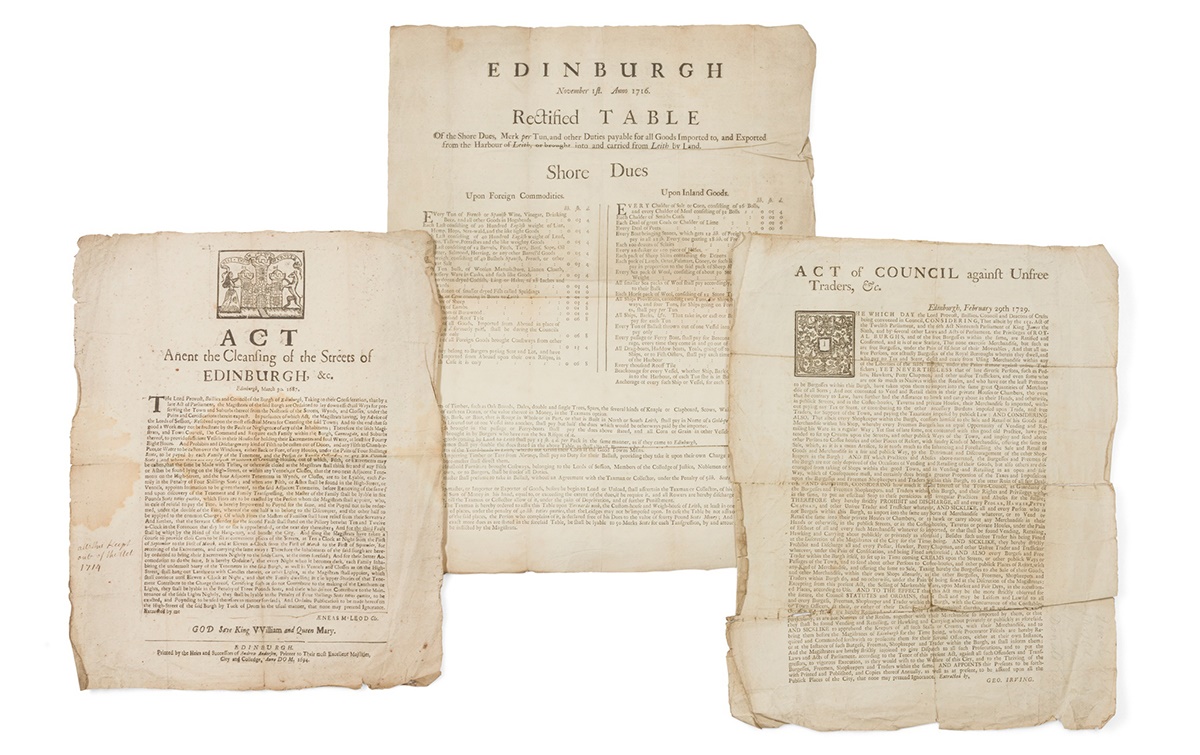 And just in case any residents thought they might sneak out and spread it around the street instead the Council ruled that if any Filth or Ashes be found lying in the High Street, or within any vennels or closes, then the two adjacent tenements and the four adjacent tenements in Wynds and Closes, would be liable, each Family, to the Penalty of Four Shillings Scots, and if anyone was caught red-handed ‘the Master of the Family shall be lyable in Six Pounds Scots’. If the fine was not paid some items could be impounded until the fine was paid. But so that a master should not be fined for the crimes of servants it was stated clearly that ‘the Master of Families shall have relief from their Servants’. Servants however were subject to a rising scale of penalties: fine first, then second time round to ‘stand on the Pillory betwixt Ten and Twelve a Clock in the Forenoon that day he or she is apprehended or the next day after’. For the third misdemeanour the servant ‘shall be whipt by the Hand of the Hang-man, and banish the City’.

But to show that the Council was providing the necessary for proper waste disposal, the magistrates announced the would ‘provide closs [sic] Carts to be set at convenient places of the Streets, at Ten a Clock at Night from September to March, and 11 a Clock from March to September, for receiving of the Excrements, and carrying the same way. Therefore the Inhabitants of the said Burgh are hereby ordained to bring their Excrements Nightly to the said Carts, at the times aforesaid’.

To ensure all this slopping of buckets could be done at night without too many slips and spills the council ordained that every night when darkness fell each Family inhabiting the lowest storey should hang out ‘Lanthorns with Candles therein, or other Lights’, the families living above having to contribute to the cost of the making of the Lanthorn, subject to a fine of Three Pounds Scots if they did not, and those that did not contribute to their maintenance to a fine of Four Shillings Scots. And to make sure that no one could feign ignorance the Council ordered that ‘Publication to be made hereof on the High Street of the said Burgh by Tuck of Drum in the usual manner, that none may pretend Ignorance.’

Edinburgh Council's current plans in their efforts to improve recycling rates have been met with some controversy. It is intriguing to consider if the the Council's reforms in 1687 were met with relief or outrage by the inhabitants of 17th century Edinburgh.