A True Original of Scottish Art

"She should no longer be seen as an exotic maverick but acknowledged as one of the true originals of Scottish art."

The ‘maverick’ label is often attached to Pat Douthwaite to encompass a variety of the artist’s more striking traits: her troubled personality, the restless, nomadic lifestyle that took her across the world in search of subjects and meaning and her complete disregard for anything that did not further the development of her artwork, despite it making her a difficult figure to manage and work with. A good example is an incident in which she broke into a house and stole back one of her paintings from a buyer whom she did not consider worthy of owning her work. 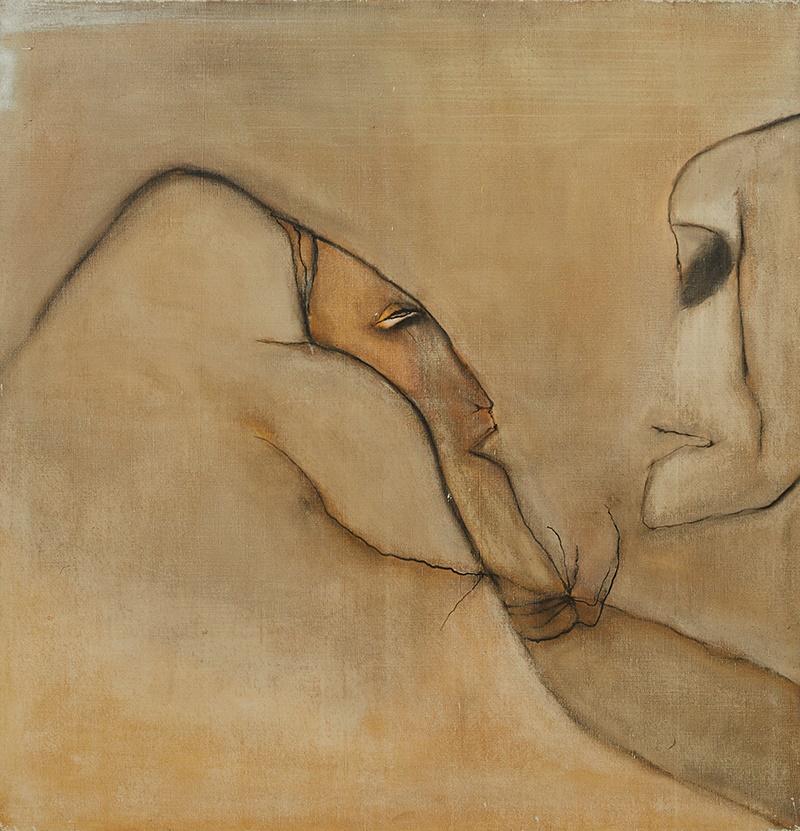 Inscribed with title and dated '75 stretcher verso, oil on canvas

This demanding, uncompromising commitment and all-encompassing focus on her work paid off. She developed and sustained a distinctive, signature style characterised by raw feeling and idiosyncratic lines. Douthwaite was fascinated by historical heroines including Greek deities, Mary Queen of Scots and the aviator Amy Johnson and often depicted them as well as herself. Her images of women remain the most powerful and popular of her works, truly encapsulating the pain and suffering women can experience and endure. This exploration of suffering means there is a violence in the work, yet Douthwaite often manages to retain fun, playful touches in their execution.

Born in Glasgow in 1934, Douthwaite’s first exposure to creative expression was in the form of dance classes at the dancing school run by Margaret Morris, the bohemian partner of the Scottish Colourist John Duncan Fergusson. She eventually discontinued dancing and decided, aged twenty-four and with no artistic training, to become a painter. Douthwaite showed her work to Fergusson, who recognised her talent and encouraged her endeavours, though he suggested she avoid art school, as he had done. Thus, both Morris and Fergusson had a major impact on Douthwaite’s creative endeavours. Douthwaite’s ever-present wanderlust quickly took over, and she left Glasgow to join an artistic community within in William Crozier’s house in East Anglia. An informal artistic training in itself, she was surrounded by fellow artists including Robert Colquhoun, Robert MacBryde and Crozier himself.

In her lifetime, her work was recognised and championed by key figures in the Scottish art world; including Richard Demarco, who mounted her first major exhibition in Scotland in 1967; Douglas Hall, the former Director of the Scottish National Gallery of Modern Art and the artist and critic Edward Gage. Following her death, her popularity continues to increase as more and more people are drawn to her distinctive, expressive style and tales of her mysterious, maverick personality.

We are delighted to present a diverse selection of works by Pat Douthwaite in our forthcoming auction of Post-War & Contemporary Art this April.