Christopher Dresser founded Linthorpe Art Pottery in Middlesbrough in 1879 with a local entrepreneur John Harrison. Harrison had met Dresser at a lecture on Japanese Art he had given locally, and Dresser had been affected by the deprivation caused by high unemployment in the area and together they did something about it. Harrison owned a brickworks near Middlesbrough and it is from this red clay that most of the output was made. They aimed to create a model working environment with a highly trained workforce and fair pay regardless of gender.

Eventually the firm would go on to employ over 100 people, including skilled workers from the Staffordshire Potteries and artists trained at the Schools of Art, South Kensington. Dresser persuaded master potter Henry Tooth to oversee the production of ware and for three years Dresser himself was ‘Art Superintendent’ of the firm. 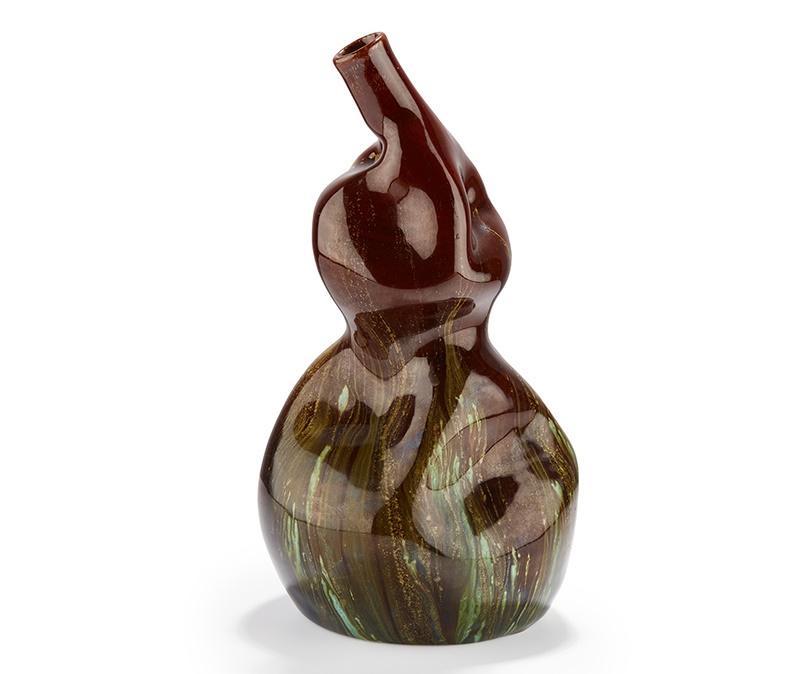 Although the work Dresser produced for Linthorpe was broadly inspired by his study of Japanese ceramics during his ground-breaking visit to Japan in 1876, characteristically he also drew from many other historicist sources including Roman glass and Peruvian and Fujian pottery, which he had studied in the British Museum. The wares at Linthorpe represent Dresser’s belief that the commonest materials can be transformed into things of beauty. Rich glazes & sculptural qualities revealed his skill in creating interesting and exciting shapes.

Although critically acclaimed and reasonably priced the pottery ran into difficulties in the late 1880s, due in part to the rising cost of materials and saturation of the market by similar products produced by the Bretby pottery formed by a partnership between potter William Ault and Henry Tooth, who had left Linthorpe in 1882, and eventually the pottery closed in 1889-91. Many of the Dresser moulds were bought by Ault Pottery, which had been set up by William Ault in 1887.

Christopher Dresser himself was later employed by the firm. His contract, signed in May 1893, paid £400 over three years. It specified he should travel to the factory twice a year, with first-class train expenses and a guinea a day for hotel costs for up to three days. On his visit he was to “inspect the production of objects”, “instruct the workmen” and “criticise objects already made”. The Ault Pottery was the last of three ceramic firms in the north of England with which Dresser was associated.