Charles Rennie Mackintosh's 'Brander Back' Dining Chairs in Design Since 1860

Dating to Charles Rennie Mackintosh's last phase of creativity as an architect and designer in Glasgow, here, Mackintosh has designed his own version of the ‘brander back' style chair. From a set of six oak dining chairs designed for his friend, the decorator William Douglas, a pair of these dining chairs led our April 2021 auction.

By 1910 Charles Rennie Mackintosh was in the last phase of creativity as an architect and designer in Glasgow. He had completed the second phase of the Glasgow School of Art the previous year, perhaps his greatest work. Further furniture orders were commissioned and delivered to the School in 1910. Other work included designs for the temporary White Cockade tearoom at the Glasgow Exhibition and redesigns of furniture and interior decorations for The Chinese Room and a new room, The Cloister Room, both for Miss Cranston's Ingram Street Tearooms. 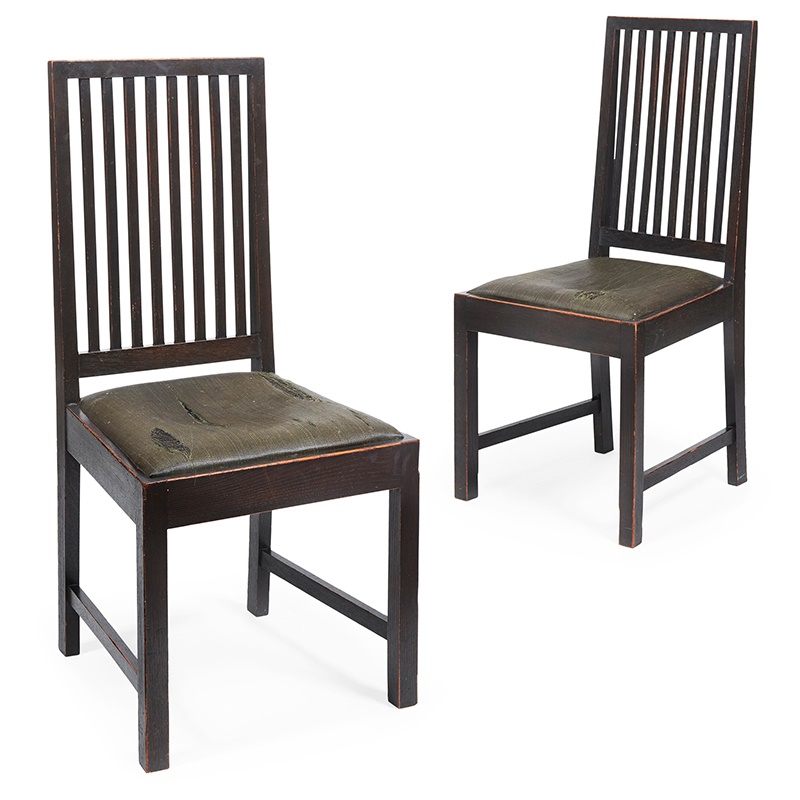 At the same time, he worked on a series of furniture designs for his friend, the decorator William Douglas, who worked from premises in West George Street. Douglas was employed on various projects by Mackintosh including Hous'hill, Miss Cranston's home, in 1904. Amongst the furniture designed for Douglas was a set of six oak dining chairs, including the pair offered in our April 2021 auction.

The chairs are oak, stained dark and designed in the ‘brander back' style, so-called in Scotland because of their backs' resemblance to the brander iron or gridiron used over the fire to cook meat or to toast oatcakes. The origins of the 'brander back' date to the late 18th century or earlier. The simple concept of vertical back slats was used on chairs in one interpretation or another for all levels of society throughout Scotland until the second half of the 19th century when it fell out of fashion.

In common with, for example, his interpretations of ladder back chairs in various manifestations, Mackintosh has designed his own version of this vernacular chair. The back, typically squat, has been elongated, and the number of slats doubled from a characteristic four to eight. He has further accentuated the vertical character of the chair by omitting the cross-stretchers, normally found to the front and rear.