This March, we are delighted to present a gilt metal replica of the Middleham Jewel to auction in our 09 March Jewellery sale.

In 1985, metal detectorist Ted Seaton, made a miraculous discovery on a bridle path near Middleham Castle in North Yorkshire; the object discovered is miraculous in its survival but also in that Seaton may never have discovered it had he not forgotten to turn his metal detector off while walking back to his car.

What he discovered, he initially thought was a lady’s powder compact, but in fact proved to be an important late 15th-Century jewel, engraved with religious motifs and set with 10.00ct cabochon sapphire. The front is engraved with an image of the holy trinity below the sapphire, within an inscribed border reading ‘Ecce Agnus Dei qui tollis peccata mundi ... miserere nobis ... tetragramaton ... Ananyzapta’ (Behold the Lamb of God, that takest away the sins of the world. Have mercy upon us …).

The reverse shows the Nativity with the Lamb of God, in a border of fifteen saints, some of which have been identified, such as St Peter, St George, St Anne etc. The original pendant opened to reveal a hidden compartment, identifying the piece as a reliquary. When it was discovered, it contained three small discs of silk embroidered with golden thread, which may have come from a Bishop's cope, soil and roots; but it may originally have held an important religious relic. Various holes around the edge of the pendant also suggest that it may have included a border of pearls, and there is still some trace of blue enamel, hinting at a more colourful original.

Until 1471 Middleham Castle was the home of the Neville family, after which it was granted to Richard, Duke of Gloucester, later Richard III (1452-1485) by his brother King Edward IV (1442-1483). The jewel was clearly a high-status commission, and could only have been made by a wealthy individual, and many scholars believe that it was intended for a female wearer, as an aid to prayer but also more specifically as an aid or talisman during the trials of childbirth. The blue of the enamel, as well as that of the sapphire, reference the Virgin Mary; while sapphires were also believed to have healing properties, such as protecting the body from illness and inclining God to listen to the prayers of the wearer, dispelling depression and calming the mind. The engraved word ‘Ananyzapta’ is believed to be a magic word, protecting the wearer from epilepsy. Among the saints in the border of the reverse, feature St Margaret of Antioch, the patron saint of pregnancy and childbirth. St Anne, the mother of the Virgin Mary and patron saint of women in labour and grandmothers, and St Catherine of Alexandria, patron saint of amongst other things, girls and the dying. 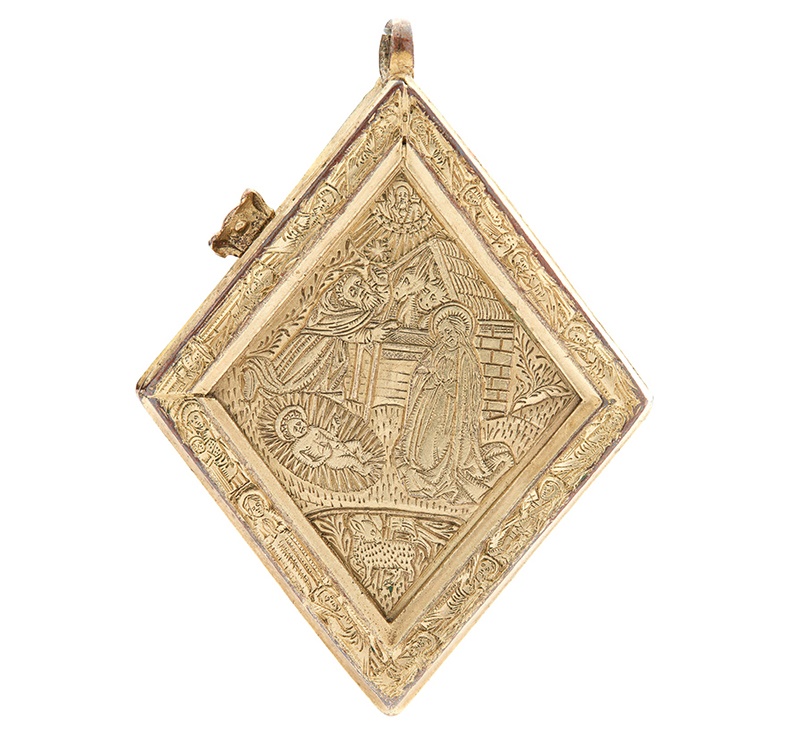 There is evidence in portraits of noble ladies of the third quarter of the 15th century wearing these lozenge-shaped pendants, all evidence which, along with the location; suggests several possible candidates as the jewel’s owner, all relations of Richard III. His wife, Anne Neville (1456-1485), and his mother Cecily Nevil (1415-1495) are strong candidates, but perhaps the most likely is his mother-in-law, Anne Beauchamp (1426-1492), widow of Warwick the Kingmaker (1428-1471). Anne, was a wealthy woman, and also renowned for her enthusiastic attendance at and help with various childbirths; she was likely in residence at Middleham Castle when Richard’s only, and short-lived, son, Prince Edward (1473/76-1484) was born.

Following it’s discovery, the jewel was found not to be subject to Treasure Trove laws, and so was sold by Seaton in Sotheby’s in 1986; splitting the £1.4 million price realised with the landowner and a small syndicate of metal detectorists who were present the day it was discovered. Today, the jewel is part of Yorkshire Museum’s collection in York; while another replica, similar to this one, can be found at Middleham Castle.

Sale Day from 9am