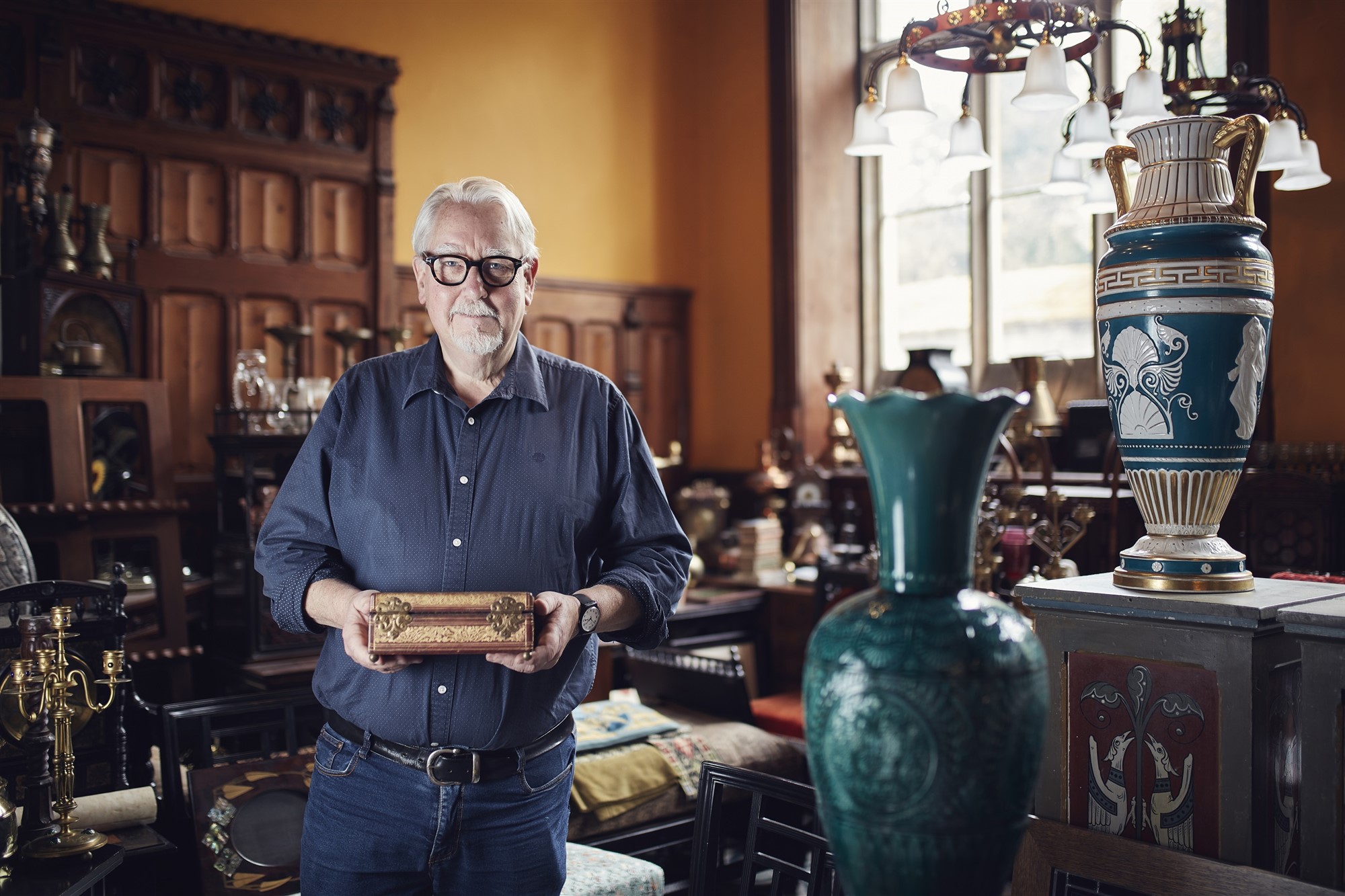 What led you to become a dealer?
I actually fought against being a dealer for a long time. I was a clothes designer in the 1960s and early 70s and subsequently a successful interior designer. I thought dealing wasn't creative enough but eventually came to accept and embrace that, if passionate, one can be creative in whatever you do.

Did you decide to specialize in British design because it is what you collected?
Early on I also collected Art Nouveau and Deco, but by the time I was in my mid-20s I had honed my collection and nearly all of it was British from the mid nineteenth century onwards.

So do you think that your taste has changed over the years?
Yes. The key interest is still core but I’m now more appreciative of a wider range of things. I’m interested in the source material and the culture it came from. I was recently in Glasgow visiting a Charles Rennie Mackintosh exhibition and of course I love Mackintosh, but my favourite thing in there was actually a Japanese textile wall hanging which had been given to Glasgow museums in 1878. It was salmon swimming up a waterfall. The salmon, which were not wholly shown were represented as movement and I thought it was the most stunning piece of art.

So with Japanese sources in mind is it true that E.W. Godwin is your favourite designer?
Yes, although his influences extend beyond the east. When most people think of him it is probably for his Anglo-Japanese designs for furniture including his justly admired sideboard. However in the 1860s he was a champion of the Gothic Revival architecture and furniture, with his great friend William Burges. He also designed in the Old English style. He was very eclectic and I think that's why I really appreciate him. He was an architect foremost, a furniture and textile designer, he did theatre design, he did costumes. He was a real polymath, if that's the correct word.

You do seem to collect widely – how would you describe your taste?
Definitely also eclectic, although obviously with a bias to British design of the last two centuries. If something appeals I will buy it, regardless of its supposed pedigree. As I get older, I find it increasingly frustrating that people buy by name and not by look. Just because something is by a particular artist or designer in my view doesn't make it good in itself. I think you have to look at an object or work of art first. I respect collectors who do that.

Textiles, have been a lifelong interest of yours - can you explain what it is specifically about textiles that resonates with you as a collector?
Textiles are something we all use every day and most people aren't really aware of them. I think the variation of designs and again the sources are so varied that is hard to get bored with them. Then there are the techniques themselves, a wonderful weave or print or whatever - it's really a limitless area to be interested in.

I think it will be interesting for people to know what motivates you.
What motivates me is certainly not money, and that's not being glib. I like the fact that money can buy you a certain amount of freedom, but money has never been my guiding force. A major part is the thrill of the chase! I think to be an antique or art dealer is to lead a rather charmed life and I wouldn't have swapped it for anything.

Why are you doing this sale?
I am aware that over my lifetime I have collected a lot of interesting things, which should be shown and shared. I really enjoy working with Lyon & Turnbull and the textile auction we held two years ago was very successful. It requires discipline to put together a themed auction, and I enjoy having to focus. We will also be presenting unusual pieces and showing them in a new context.