We are delighted to present an ink and colour on paper painting depicting the God of Longevity, Shoulao and Boy attributed to Gu Jianlong in our forthcoming live online Fine Asian & Islamic Art auction taking place on 06 November 2022.

There is little known about the painter Gu Jianlong, except that he served as a court artist in the 1660s-70s. He was born in Suzhou Taichang, and painted portraits of Qing emperors and imperial family members. His works are in the collection of The British Museum, with other extensive works in The Nelson Gallery-Atkins Museum of Art, illustrated in Wai-Kam Ho, et al., Eight Dynasties of Chinese Painting: The Collections of the Nelson Gallery-Atkins Museum, Kansas City, and The Cleveland Museum of Art. 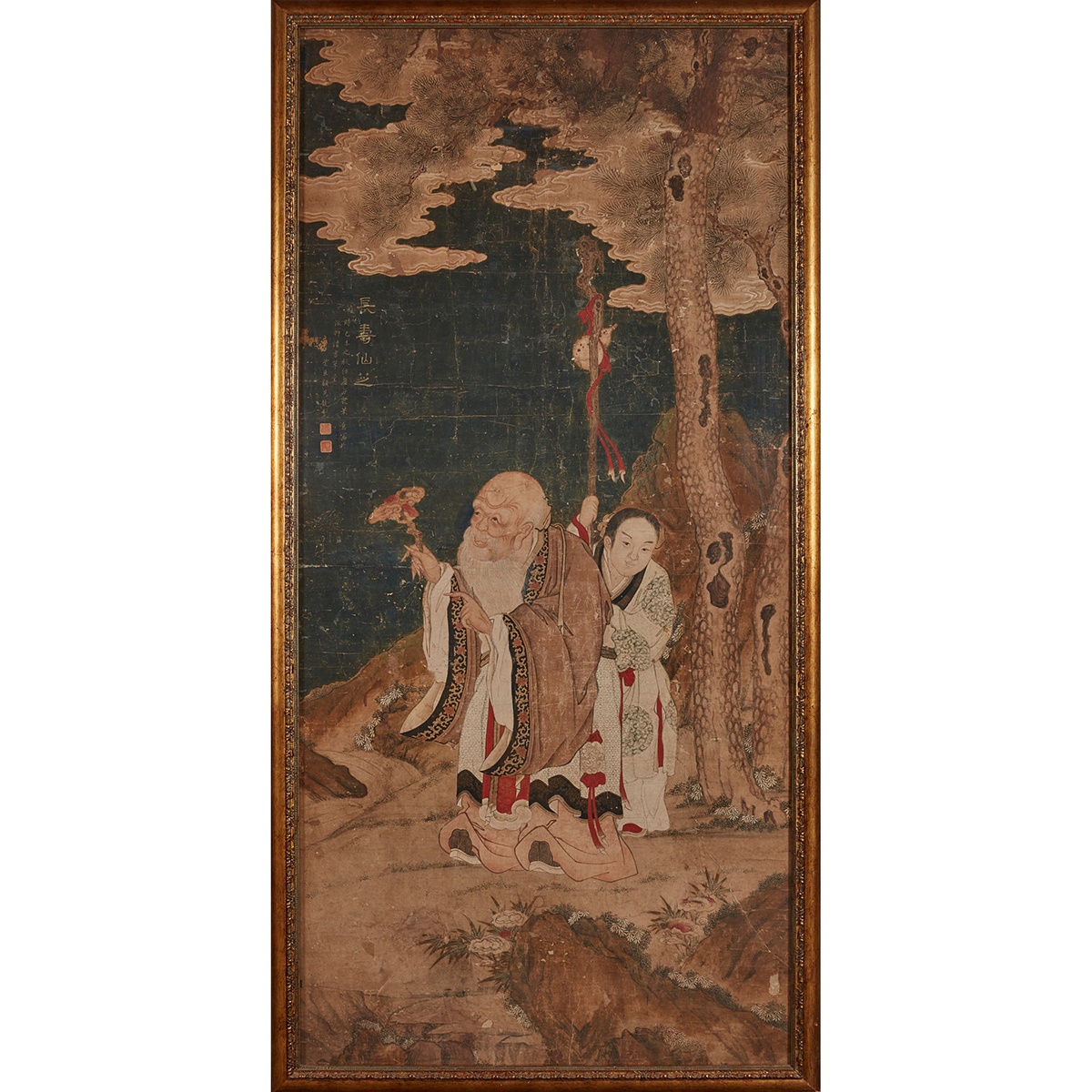 We are delighted to present an ink and colour on paper painting depicting the God of Longevity, Shoulao and Boy attributed to Gu Jianlong in our forthcoming live online auction taking place on 06 November 2022. It is titled 'Changshou Xianzhi' (The Magical Fungus of Longevity) on the left of the painting with a further inscription stating that the work was painted in the year to Ji Wei in Autumn (1679) and in the manner of Tang Ziwei (also known as Tang Yin, 1470-1523), painted in the Studying Straw Hall of Deep Willow. The work is signed 'Yun Chen Gu Jian Long, with two red seals 'Gu Jian Long Yin' and 'Yun Chen' applied.

The painting featuring in our November Fine Asian & Islamic Art auction comes from the collection of the late James Kedzie Penfield (1908-2004), who joined the American Diplomatic Corps to China in the 1930s and 1940s. In 1954, Penfield became United States' High Commissioner for Austria with the mission to re-establish an independent, neutral and democratic Austria. In 1961, he was appointed American Ambassador Extraordinary and Plenipotentiary to Iceland.

Born in NYC in 1908, James' mother was one of the first women to drive a car by herself all the way across the United States within a week. James must have inherited her pioneering spirit, because as a young Stanford graduate, he joined the small hand-picked team who travelled to China to work for the American Diplomatic Corps in the 1930s and 1940s. Although his diplomatic career later took him to posts all around the world, his daughter remembers him speaking fondly of "the best years of his life in Peking, Canton and Chunking".

Whilst in China, James established friendships with prominent local artists, he was even gifted a painting, as a token of farewell, by and from Zhang Daqian (1899-1983), one of the most celebrated 20th-century Chinese artists.

A further example from the collection of the late James Kedzie Penfield featuring in our forthcoming live online auction is Lot 54, a wood block 'Wutai Shan' print and group of twenty-four ink rubbings dated to the Qing Dynasty and later. This group of ink rubbings is mostly related to and taken from the Wu Family Shrines, of which the Wu Liang Shrine is the best known. It was the family shrine of the Wu clan of the Eastern Han dynasty (25-220AD), located at the Wuzhai Village, Jiaxiang County, Shandong Province. The original shrine was carved and engraved with images of legendary rulers and paragons of filial piety and loyalty, historical and mythological stories, scenes of feasting, homage, processions, omens, and other figural and decorative designs.