Born in Leith, Edinburgh in 1924, Eduardo Paolozzi grew up in the ice cream parlour owned by his Italian immigrant parents, immersed from the beginning in popular culture. In June 1940, on the outbreak of war, he was interned for three months as an ‘enemy alien’ and it was during this time that his world changed when his father, grandfather and uncle were killed when the ship carrying them to detention in Canada was sunk by a German U-Boat.
On his release in 1941, Paolozzi took over the family ice cream shop but had also begun by 1943 to attend evening classes at Edinburgh College of Art, demonstrating considerable talent. He was able to enter the Slade School full-time in 1944 and, as it had been removed by the war from London to Oxford, Paolozzi spent most of his time in that city’s Pitt Rivers Museum, fascinated by its world-renowned collections of African art and fetish sculpture. Equally impressed by the work of Picasso and making a connection between the two, he began to understand what his art might be able to achieve and, leaving the Slade at the end of the war, arrived in Paris in 1947. Here he met such important artists as Braque, Arp, Brancusi, Dubuffet, Leger and Giacometti, along with Sartre and Camus, and also befriended other young Scottish artists then in the city, including William Gear, William Turnbull and Alan Davie. 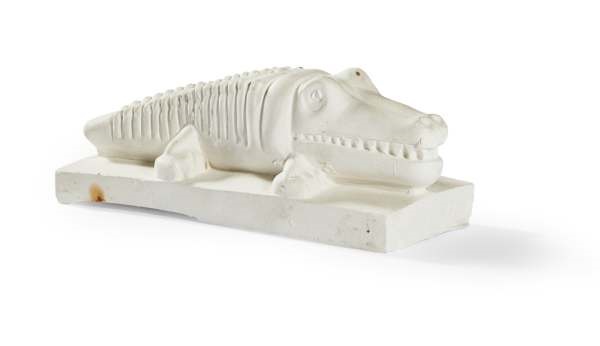 On leaving Paris, Paolozzi returned to London, where a one-man show at the Mayor Gallery sold out. He then set up a studio in Chelsea and filled it with the sort of popular ephemera and found objects that would continue to inspire his work for the rest of his life. Paolozzi was a founder of the Independent Group and in their show at the Independent Gallery in 1952 broke new ground with a silent projection of found images. The piece was a revelation, proposing a radically new aesthetic that, within a few years would form the basis of British Pop art. At the same time he began to develop a fetishistic style of sculpture, influenced by Dubuffet and also reminiscent of Giacometti and Germaine Richter.
In 1960 he had a retrospective in the British Pavilion at the Venice Biennale and at this point his work began to change, with the original, organic, totemic figures metamorphosing into the slick mechanical men of the 1960s. From 1965, Paolozzi began to create distinctive collage-based Pop Art screenprints, under the collective title of Bunk. In particular As Is When was a portfolio of twelve such prints inspired by the ideas of the philosopher Ludwig Wittgenstein. The fusing together of fragments of text, abstract design, images of aircraft and machines, and Disney characters was sustained in other portfolios, most notably Moonstrips Empire News of 1967.

In the 1970s Paolozzi began to make the quasi-cubist sculptures which were to figure among his signature works. The plaster sculptures which will be offered in Lyon & Turnbull’s Contemporary & Post-War Art Auction fit loosely into this aspect of his work, although dating from the 1990s. Paolozzi was particularly keen that plaster should achieve a higher status than had previously been the case and his works in the medium were often not cast in any other material. They were cast from a variety of sources, some being taken from the ‘ready-mades’ in his studio, while others were made to the artist’s original, sometimes already-existing designs.

The Crocodile was among a number of small animal sculptures made specifically for the ‘Arche Noah’ (Noah’s Ark) exhibition staged in Munich in 1990. In contrast, heads were a constant in Paolozzi’s work from the 1950s onwards, and the large Cubist Head fits within a series made from the late 1980s into the 1990s. The smaller Computer Head, while less obviously totemic, is clearly a comment upon the effects of technology upon our humanity. Perhaps the most personal of the plaster works here is the Leg, which relates directly to those of Paolozzi’s sculpture Daedalus, his body constructed from fragments on a Frankenstinian model. In Greek myth, Daedalus was the builder of the Cretan labyrinth and Paolozzi seems to have seen him as a kindred spirit and probably considered the work a self-portrait. 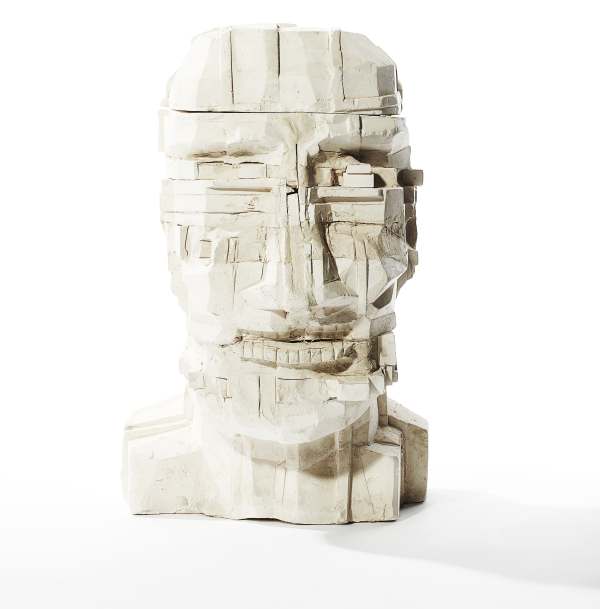 In 1994, Paolozzi gave a large number of works to the Scottish National Gallery of Modern Art, along with the contents of his studio, including a large number of works in plaster. Displayed as it would have looked in situ, the studio is clearly intended to instruct the viewer about Paolozzi’s working practice, juxtaposing his work with the inspiration which lay behind it. Paolozzi, a teacher at heart, taught extensively from his early years, initially at the Central School in London during the 1950s, then in Hamburg from 1960-62 (where pupils included that ill-fated member of the Beatles, Stuart Sutcliffe). A brief sojourn in California in 1968 preceded his being appointed Professor of Ceramics at Cologne in the late 1970s. He enjoyed a long-running association with Germany and in particular with Munich, where he also had a studio and it was here that he developed the concept of the Tottenham Court Road Station mosaics.

The mosaics were commissioned in 1979 by London Transport and are designed to link the interconnecting spaces of the station, featuring strongly on the Northern and Central line platforms. Completed in 1986, the glass mosaics cover some 950 square metres. Having suffered over the years, they were painstakingly restored in 2015 and, while 95% were retained in place, the remainder were removed and given to Edinburgh College of Art where Paolozzi was a visiting professor and where he had himself studied in the 1940s.
In his designs for the mosaics, a key example of which will be offered for sale, Paolozzi draws on his knowledge and understanding of popular culture and iconic symbolism. Having taught at the nearby Central School of Art in the 1950s, Paolozzi had retained a broad, deep-rooted and not least affectionate understanding of the local area and its diverse communities. 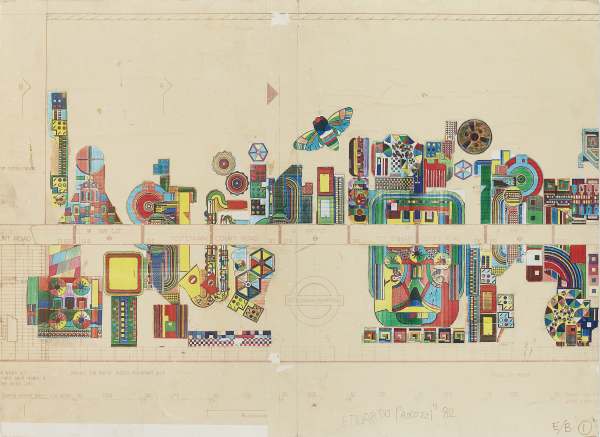 Tottenham Court Road sits at the epicentre of one of the most culturally diverse and historically significant areas of the capital, between Fitzrovia, Bloomsbury and Soho. These streets were the haunt of such writers as Thomas Paine, Vanessa Bell, Virginia Woolf, Dylan Thomas, and George Orwell, and artists including Constable, Augustus John, Colquhoun and Macbryde, Francis Bacon (a friend of Paolozzi’s), and others too numerous to mention. Here, too, was the centre of London’s jazz community and its buzzing hub of Denmark Street and other musicians from Britten and Bechet to Pink Floyd; thus on the left of this work we find saxophones and musical notes. Cameras and electrical circuits mirror the technical stores of Tottenham Court Road and Fitzrovia, while stylized Egyptian and Assyrian motifs reference the nearby British Museum and a soaring butterfly or moth is an allusion to Paolozzi’s recollections of the decoration of a long-vanished Turkish Baths. At the same time the motifs constantly refer to Paolozzi’s series of prints and such powerful and iconic images of his past work as tribal masks, spacecraft and robots.

Cogs and film reels jostle with what could be pinball machines or juke boxes in an exuberant evocation of the life of this unique locale. Using collage in a sense to mimic the painstaking method of the eventual mosaic construction, the artist summons up in a single piece of work the essential meaning of this extraordinary and vitally important commission. It is not perhaps going too far to say that it can be seen as an encapsulation of everything that made Paolozzi one of the greatest British artists of the 20th century.