The appeal of intaglios has endured through the ages with famous collections amassed by many throughout history.  Here, Ruth Davis, Head of Jewellery & Silver in Scotland, takes a closer look at the history behind these remarkable pieces.

The coveting and collecting of rare objects and exquisite craftsmanship is a preoccupation mankind has pursued since as far back in history as we are able to stretch, and the intaglio is no exception.

In its most basic form, intaglio refers to the engraving cut into the flat face of a stone; which when pressed into wax or clay, leaves an impression in relief. It is an ancient artform, believed to have originated in Mesopotamia, but is a craft which is widely considered to have reached is peek at the hands of the ancient Greeks; and was continued by the Romans.

While their practical use for sealing documents and letters was used from relatively early on, it was quickly recognised as a skilled craft in its own right; and we see examples of carvers signing their work form as early as the 5th century AD, suggesting that they valued their ability and work as artforms for which they were proud to be recognised. It is important to remember, as you look at some of these pieces enlarged in images on your screen, that they are often measured in millimetres, and the craftsman themselves had no magnifying glasses to aid them in antiquity, making the feat all the more remarkable. Often, they are so small that collections of the clay impressions are often easier to view, and have in themselves become collectable. 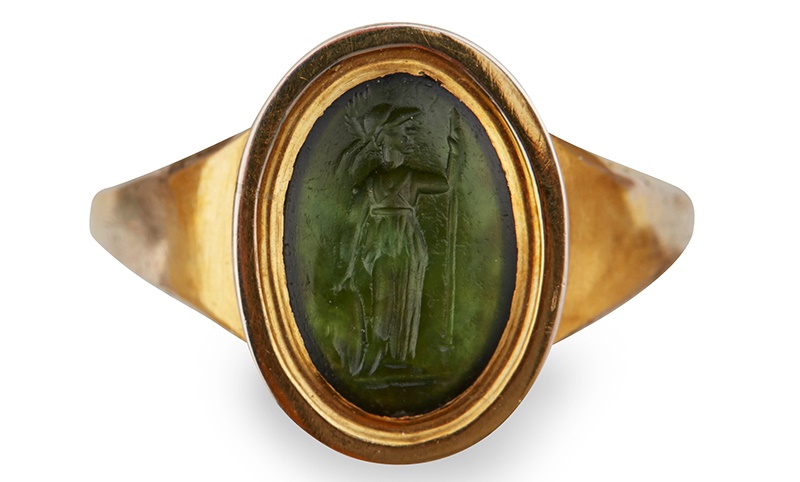 the green translucent stone of oval form with a standing classical lady holding a spear and something in the other hand, simple mount | Ring size: Q/R, intaglio height: 1.1cm | Provenance: Lots 111 - 119 from a private collection. | Sold for £1,750*

Early examples were carved in semi-precious stones, quartzites, garnets and hardstones; rarely in harder materials such as sapphires and diamond for which they lacked the equipment to cut. Abrasive power consisting of harder materials was used on small drills, or hand tools for finer work; and with the conquests of Alexander the Great, trade routes expanded allowing for a wider range of gem-materials and craftsmen to travel and influence. Ancient examples often depicted mythological scenes and figures or portraits of individuals; later examples looked back for inspiration; covering similar subject matter, and turning to classical sculptures or the copying of famous intaglios in royal or papal collections. Many examples from antiquity survived, rather surprisingly, via ecclesiastical collections despite their pagan subject, as they were set for decoration in furniture, crosses and book bindings, while others have also been subsequently excavated. 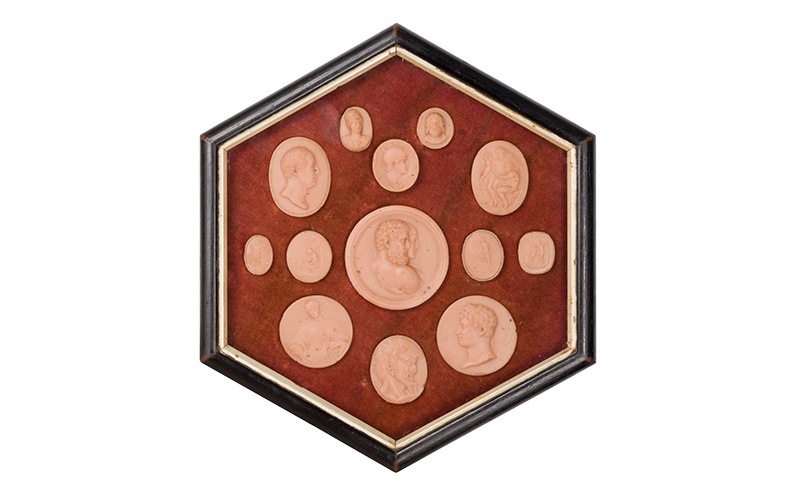 Following the ancient period, subsequent periods of revival have been recognised in the craft during the Renaissance and later during the 18th century with Italy, particularly Milan and later Rome becoming centres for excellence. However, interest in collecting them never seemed to wane. They appeal to the collector for many reasons; their value as gem materials and works of art; their craftsmanship, their appeal as jewel in their own right, and also as historical artifacts. Indeed, a great revival in collecting took place during the advent of the Grand Tour. They were valuable, portable and a way of displaying one’s appreciation of not only great art, but ancient myth and history; it was this convergence of wealthy tourists willing to spend their money freely which brought gem-cutter such as Anton Pichler (and his sons) to Rome and fuelled that later revival. 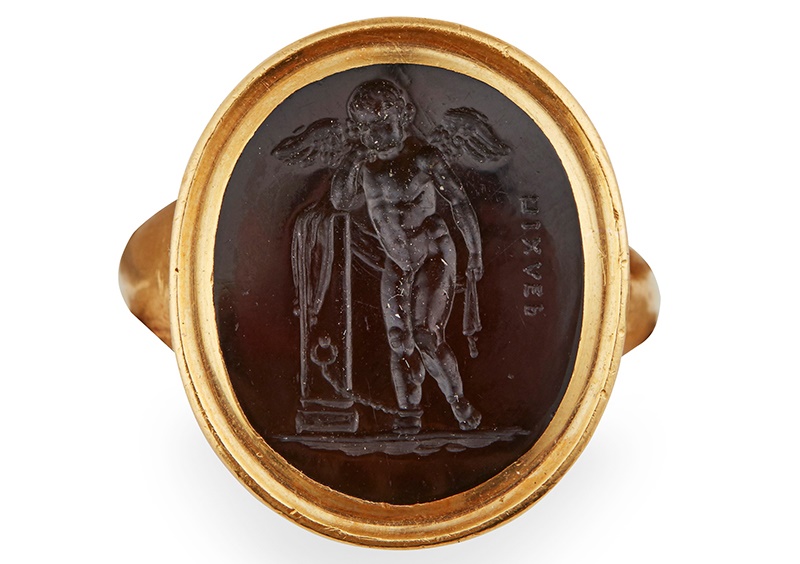 the oval hard stone carved with the figure of a weeping Cupid symbolising repentance, chained to a column by his ankle and holding his cloak signed in Greek letters Pichler (Luigi Pichler 1773-1854) rub-over set in yellow gold on a plain tapered shank | Ring size: N/O, matrix height: 1.6cm | Provenance: Lots 111 - 119 from a private collection. Duke of Wellington Collection (1807-1884), The Wellington Gems exhibition, no 187, S.J Phillips, London 1977. | Sold for £22,500*

Famous collections were amassed by many throughout history. Julius Cesar and Marcus Aurelius were said to be collections, and later Thomas Howard, 21st Earl of Arundel, amassed a large collection while on tour during the early 17th century. William Cavendish, 2nd Earl of Devonshire was also an avid collector, while the 4th Duke of Marlborough was recorded as often turning to his collection as a source of ‘relief’ from his ‘ambitions wife’, sister and children. Not to mention the Duke of Wellington, pieces from whose collection featured in our last auction. Now, these famous connoisseurs add to the history and also the value of ancient and later examples from the 17th and 18th centuries, items from their collections are keenly sought after today as that provenance is of interest in its own right.

After the success of the collection of intaglios in our recent March auction, we are looking forward to the inclusion of further examples in our June sale, and are currently inviting entries.

Consignments invited until Friday, 7th May 2021

Lyon & Turnbull's team of jewellery specialists’ extensive knowledge and experience of the current market provides the essential combination for the successful sales of both modern and antique jewellery; from fine Edwardian and Victorian pearls, through classic diamonds, sapphires, rubies and emeralds from the houses of Cartier, Boucheron, Bulgari and Tiffany, all the way to the outrageously decadent designs of Grima and the understated, elegant works of Jensen.

With six dedicated jewellery auctions a year throughout the UK, including two flagship events in central London, our expert team will be able to give you the specialist service required to achieve the outstanding result you need.