‘This man ought to be an artist!’
- Sir James Guthrie, on seeing Charles Rennie Mackintosh’s watercolours at Glasgow School of Art. 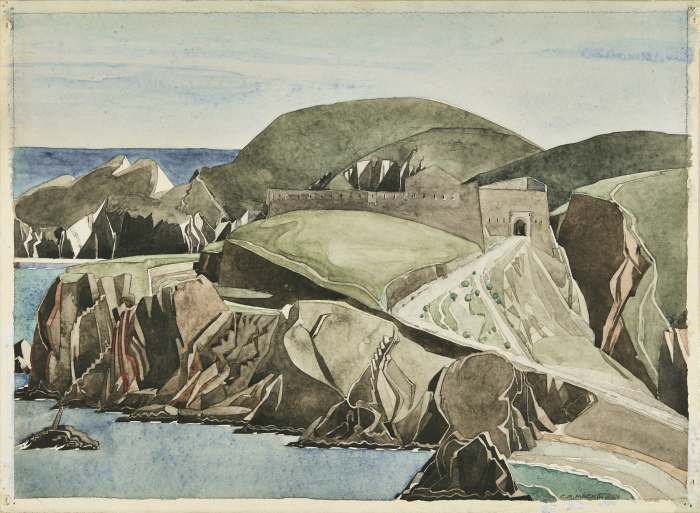 In Mackintosh Watercolours, Roger Billcliffe indicates that this division between art and architecture was the opposite of how Mackintosh viewed his work, but it is an interesting introduction to the particular artistic talent of a man still known best for his architectural designs.

Mackintosh drew throughout his life. Earlier in his career these drawings recorded details to be utilised in his design vocabulary, but as he aged he began to use pencil and watercolour to create finished artistic works in their own right, starting with the imaginative, symbolist pictures of the early 1890s and moving through a focus on botanical subjects in his later works. The Road through the Rocks dates from c. 1924-26, following his move to the South of France on the advice of friends, particularly the Scottish Colourist painter, J.D. Fergusson. Here he turned his unique approach to the countryside, where the interaction between the natural and man-made intrigued him. In the work seen here, to be offered on 14 June, this man-made intervention is one of the forts stationed along the coast and border with Spain. Mackintosh captures both its harmonious insertion into the landscape and the smooth, angular contrast it offered against the undulating hills and jagged cliff edges, capturing the seemingly organic pattern of man and nature with an architect’s eye.

The Road through the Rocks was included in the 1933 Memorial Exhibition dedicated to Charles and his wife, Margaret Macdonald Mackintosh, where nearly all the later watercolours were purchased by personal friends. It was later in the collection of Professor Thomas Haworth, an eminent collector and promoter of Mackintosh’s work, who amassed the largest private collection of his work as well as publishing many works on Mackintosh.