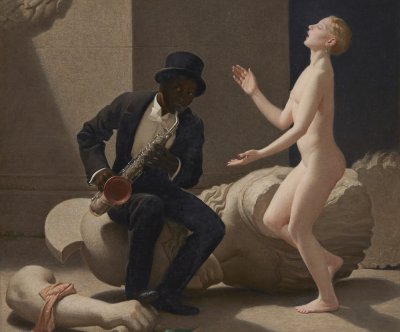 The Threat of Jazz

John Bulloch Souter was a Scottish artist, best known for his portraits, and successful copies after Old Masters. Yet one painting by him caused such a furore, that it made headlines in the international press and was removed from display at the Royal Academy’s Summer Exhibition. The painting was The Breakdown, and the year was 1926.

The Breakdown is a strikingly accomplished painting. Yet it was the subject that caused controversy, as the painting depicts a black saxophonist, sitting on a shattered classical statue of Minerva, the goddess of music, while a naked white woman dances to his music. The woman appears to move as though in a trance, totally abandoning herself to the music, and her discarded clothing and shoes are visible in the far corner of the composition. Within days of its exhibition, the British Colonial office contacted the Royal Academy to request the removal of the picture for “reasons of state, not art” and “in the interest of the empire.”

Souter claimed that his painting was intended to “to illustrate the tendency nowadays for Jazz influence to permeate our daily lives,” and this was true, jazz was beginning to filter through into wider cultural life and in many circles the radical change this represented, towards freedom and a breaking down of strict social norms, was met with celebration and enthusiasm. Yet, at the same time, the British Empire, and the wider racism it represented, were obviously felt to be under threat, and the incident was featured in news stories as far as the U.S.A., India and South Africa and records made of society figures making comments such as, “it would make ruling our natives difficult.”

As cultural researcher George McKay explains, the idea of Jazz had become at this time a catch-all for wider concerns about new social freedoms in the post-war era, as well as the perceived instability of the empire; everything felt to be “disruptive, chaotic and dangerous,” could be located within this scene, and thus read either positively, or negatively, into the picture. We can even read Souter’s title as part of the dichotomy around the reception of jazz; on one hand the freedom it represented, but on the other the suspicions around its subversive nature. The very term ‘breakdown’ could be referring to a musical concept, or in a wider sense, the breakdown of the established order.

Most surprisingly, some of the British music establishment reacted strikingly negatively, the editor of Melody Maker, spoke out on the picture on behalf of the whole music scene, claiming “We jazz musicians … protest against, and repudiate the juxtaposition of an undraped white girl with a black man,” the picture represents a “perversive danger to the community and the best thing that could happen to it is to have it … burnt!” In fact, Souter did destroy the original painting following the outcry, but kept his original drawings and studies. The subject and painting obviously remained important to him, as much later in his career, he painted a new version, which he dated 1926-62, acknowledging the time that had passed.

In 2018, the story of this sensation demonstrates the ability of art to capture attitudes, its power in upsetting standards and the wide-ranging variations in interpretation of a single image. Society has changed over the last decades, and now the positive enthusiasm for jazz and freedom wins out; looking at the painting today its artistry is evident, and the contemporary comment of the Academy’s President seems more apt, “a work of great promise executed with a considerable degree of excellence.”