Married in 1925, the artists Beatrice L. Huntington (1889-1988) and William Macdonald (1883-1960) established a strong artistic partnership that was to last the entirety of their lives. Within their joint collection featured in our December 2020 auction, both artists were represented with a selection of works alongside pieces by other artists, both friends and contemporaries of the couple.

The artists Beatrice L. Huntington (1889-1988) and William Macdonald (1883-1960) were married in 1925, establishing a strong artistic partnership that was to last the entirety of their lives. Both came into the marriage with established artistic visions, William having already trained in Paris and visited Spain, a country that was to become key to his artistic output, and earned him the moniker William ‘Spanish’ Macdonald, as recognition of his personal passion for the country and the success of his views of its landscapes. Meanwhile, Beatrice had undertaken artistic training with periods of study in London, Munich and Paris and gained some success as a portrait painter. Following their marriage, the pair travelled in Spain and then exhibited the resulting works in a joint exhibition in Dundee in 1928.

Within their joint collection, both artists are represented with a selection of work that reveals their key artistic preoccupations; particularly portraiture and the range of locations that they both lived in and enjoyed travelling to: Edinburgh, Spain, Kirkcudbright, Canada. Throughout their lives, Beatrice and William moved in artistic circles; on their marriage William was already well-established in the Edinburgh arts scene, with a particular friendship with Scottish Colourist, F.C.B. Cadell, and it is his stylish portrait of William that anchors the whole collection. 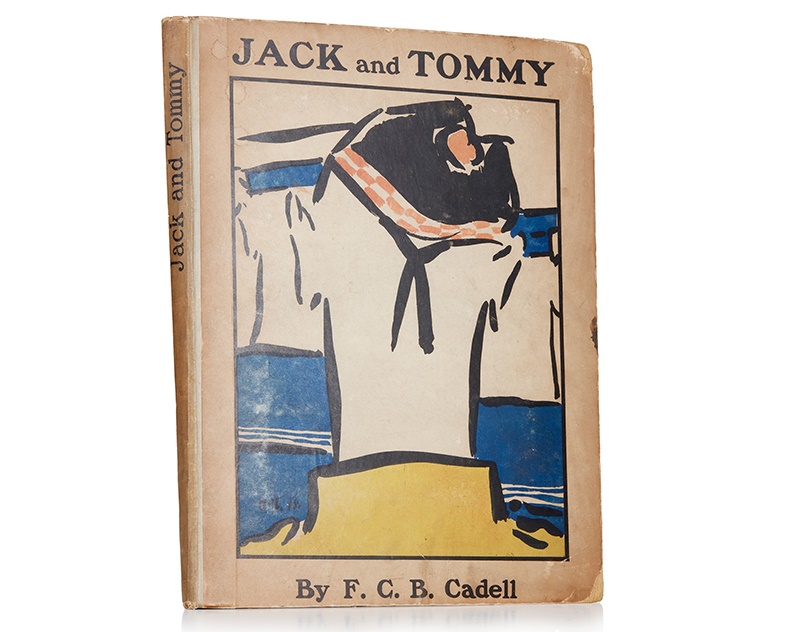 Their marriage also cemented Beatrice’s involvement in these Edinburgh artistic circles. The copy of Cadell’s ‘Tommy and Jack’ offered here is an indication of the depth of the friendship; the book was a gift with a personal inscription to the couple in the artist’s hand. However, the pair knew many artists, spending time in locations with specific creative connections, particularly Cassis in the South of France, favoured by the Scottish Colourists, and Kirkcudbright in Dumfries and Galloway, known as an artist’s colony, where they were friendly with the artist E.A. Taylor and his wife, the designer Jessie M. King. Meanwhile their home base was in the New Town of Edinburgh, Hanover Street, within walking distance of both the Royal Scottish Academy and the commercial gallery quarter, where both exhibited and sold their work. On that basis, the collection also contains works by other artists, both friends and contemporaries of the couple.

In this auction, we are delighted to be offering two works by Beatrice. The first is an early work, a portrait of her mother, dating to 1915. Impressionistic in approach, she develops a lovely sense of balance across the composition with the gentle folds of her mother’s voluminous black costume contrasted with the colourful patterning of the trellis and flower behind her. There are nods to Bonnard, as well as Whistler’s iconic view of his own mother. The painting was probably painted at the family home in St. Andrews and was exhibited at both the Grosvenor Gallery and the R.S.A.

By the 1920s Beatrice was significantly engaged with avant-garde developments in Europe, keeping in touch with Paris, and developing a new approach, away from this softness towards something starker and more stylised, with elements of cubism. However, she also engaged with contemporaries closer to home, such as in ‘Still-Life,’ where we can see elements of the still-life work of Anne Redpath in the chosen perspective, and a possible nod to her friends the Scottish Colourists, in the bold colour choice. Beatrice remained committed to her art throughout her life, still refining her approach and ideas into her late eighties.

The works by William offered here to take a journey through much of his and Beatrice’s life together, and it’s significant locations; they show the range of his artistic interests, a commitment to portraiture but largely a compulsion to capture his surrounding landscape; at home in Edinburgh, out his New Town studio window, and further afield, the locales of Kirkcudbright, Spain and Canada. In general, as an artist he had an individual perspective with a restrained palette and compositions founded on his strong draughtsmanship. The works offered are all in oil, but he was always committed to drawing, and had trained in printmaking while in Paris.

Spain was his greatest inspiration, and the subject of many of his most successful compositions; it inspired him to be ambitious, as in ‘Spanish Hill Town’ where human architecture meets monumental nature. William also seemed to have found great artistic joy in the landscapes of Canada, where the couple spent much of the Second World War, enjoying the challenge of capturing a different monumental landscape and responding to its weather conditions; the amazing light-reflecting qualities of serious winter snow.

Meanwhile, the portrait example offered here, ‘Girl in Black Hat,’ could indicate an element of inspiration from his friend Cadell, who loved to depict elegant women dressed in black. Here, William uses the chair to create a strong diagonal and livens the monochromatic palette with the patterning of the sitters checked coat and his own expressive brushwork.

We were delighted to include a fine selection of works from The Huntington/ Macdonald Collection in our December 2020 auction of Scottish Paintings & Sculpture which took place live online.