A truly rare opportunity to acquire a part of a significant commission from a renowned silversmith, this serving dish from The Anson Service was offered in our March auction of Silver & Objets de Vertu.

George Anson (1697-1762), 1st Baron Anson, the famous Admiral who circumnavigated the globe in four years and captured Spanish Treasure to the value of approximately half a million pounds, and later elevated to Baron Anson of Soberton, from 1751 till his death in 1762 he was First Lord of the Admiralty. This serving dish forms part of a much larger service which included tureens, plates and inkstands, named the ‘Anson Service’, which would have been specifically commissioned and built up over a period of time. Crafted by one of the most regarded silversmiths of the day Paul de Lamerie, this serving plate forms part of an important part of the history of early 18th Century silver.

George Anson was regarded as the Father of the British Navy and was key at introducing reform and even introduced the structure of naval uniforms. Participating in significant battles such as the Austrian Succession and the Seven Years War, his efforts closer to home Anson prevented a French invasion on British shores in 1759. Further afield, by 1760, he had assisted in capturing Canada, Senegal and Guadeloupe from the French.

Anson’s most celebrated victory was the 1843 capture of a Spanish treasure ship sailing from Manila to Acapulco with a cargo of nearly half a million pounds, and it has been reputed that there were 2,600,000 Pieces of Eight, 150,000 ounces of plate, 10 bars of Gold, and a large quantity of gold and silver dust aboard. The treasure was so vast that it was paraded through the streets of London on the way to the King in thirty-two wagons.

Following his three-year circumnavigation of the globe concluding in London in June 1744 and the successes of his naval pursuits he was elevated to the peerage as Baron Anson of Soberton. 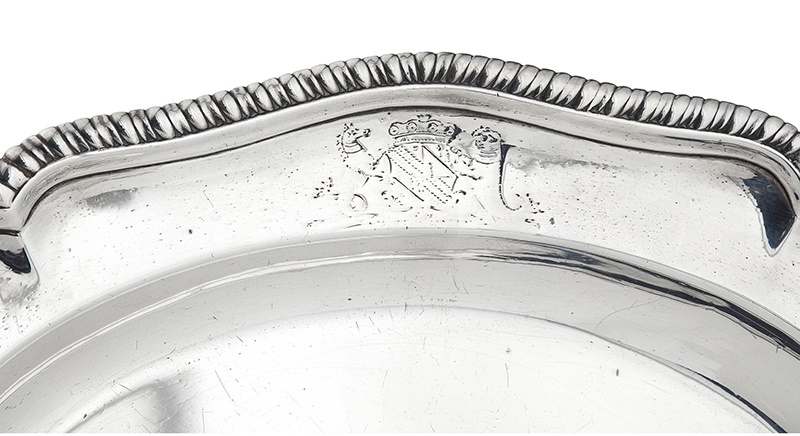 To mark this occasion, he invested his wealth in the family estate at Shugborough in Staffordshire and his home Moor Park in Hertfordshire adding further silverware to the collection. In fact, this plate hallmarked in 1747 matches the date of his elevation to Baron and emphasises the importance of silver to Georgian society. The epitome of Georgian wealth Anson is captured in portraits by Thomas Hudson and, currently in the National Portrait Gallery, a portrait after Joshua Reynolds.

Anson died without issue and the house being regarded of National importance was laterally entrusted to the National Trust. Parts from the service can still be found in their collection at Shugborough, including a pair of salvers (NT 1271250.1 and .2) and a meat plate (NT 1271293). The Victoria and Albert Museum also display an inkstand as part of the Gilbert Collection (LOAN:GILBERT.664:1-2008)

These examples and more were all crafted by Paul de Lamerie, who was an obvious early 18th-Century choice to produce the finest silverware. De Lamerie was born in the Netherlands to Huguenot parents, but the family fled religious persecution on the continent and settled in England. He became a freeman of the Goldsmith's Company, London and registered his hallmark in 1712. The continental and in particular French influence of the Roccoco style was to heavily inspire his work especially from the 1730s and he became perhaps the finest designer and maker working in this style.

He was regarded as one of the most famous silversmiths of his age due to his craftsmanship and this was aided his business acumen. With most work based on commissions, these important connections helped his reputation, becoming known as the King’s silversmith for the numerous commissions for the Royal Households. 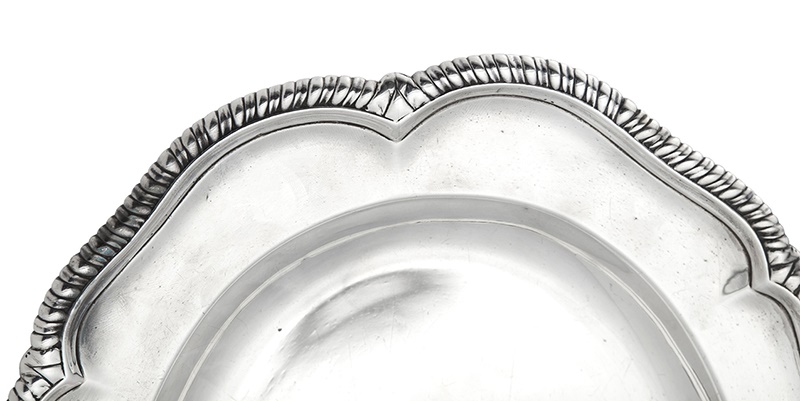 Other key clients included Catherine the Great, who commission a wine cistern of 1726, still housed in the Hermitage, (pg 77, Paul de Lamerie, At the Sign of the Golden Ball, An Exhibition of the Work of England's Master Silversmith) and the Walpole salver for Robert Walpole. A remarkably finely engraved salver with the design of the Second Exchequer Seal of George I, housed at the Victoria and Albert Museum (M.9-1956). Although working mainly on commissions, his shop based at 40 Gerrard Street from 1738 stocked further delights for the eye to behold.

The majority of the Anson service was sold at auction on the 8th May in 1893 by Christie’s and is rarely at auction, but when it appears it still attracts much interest. In 2010, Sotheby’s offered a piece from the service, which had appeared in the 1893 auction, lot 195, ‘A snuffer’s tray’ which achieved USD$50,000, other appearances of the Anson Service include the 2012 Christies sale of the ‘Property from the Estate of Benjamin F. Edwards II’ where a pair of sauceboats, lot 2591 achieved USD$43,750

This plate offered a truly rare opportunity to acquire a part of a significant commission from a renowned silversmith, and is a remarkable survival of British Georgian history.