An Eye on History

In advance of the Five Centuries: Old Master to 19th Century Art auction on 23rd May, specialist Carly Shearer takes a look at the fascinating stories and histories behind some of the successful results for Marine Paintings achieved by Lyon & Turnbull in recent years.

Although a relatively niche interest, the drama and detail of marine painting continues to capture the imagination of collectors, and they remain willing to bid strongly for these scenes, especially examples by revered artists or those of particularly desirable locations or historical periods. At Lyon & Turnbull, we find offering these paintings to be a wonderful opportunity to explore the specific historical moments these paintings commemorate and celebrate, as well as the collections they were a part of.

The present painting depicts 'The Van and Rear of All his Majesty's Ships and Transports', stationed by Cuba, with 'The Pan or Cape Land of the Matanzes, at a large distance being a high Table-Land'. The expansive view was painted in 1767 to commemorate a substantial campaign to Havana during the Seven Years War. Cuba's capital was the centre of the Spanish possessions in the Western Hemisphere and an important hub for Spain's mercantile and military forces. Spain had increasingly allied itself with France in its colonial war against England and George III finally declared war on Spain in 1762. Amid great secrecy an enormous fleet of more than 180 was gathered, under the command of Admiral Sir George Pocock, and set sail through the dangerous Old Straits of Bahama, from Jamaica, to take Havana by surprise. The campaign was a British success with Havana surrendering in the middle of August that year, but the city was returned the following year in the Treaty of Paris.

One of the lieutenants aboard the 66-gun man-of-war Orford was Philip Orsbright. He recorded in notes and drawings all the stages of the approach, siege and capture of the following weeks. Upon his return to England he approached Serres to use his detailed drawings and notes to produce a full set of paintings by 1764, which were then published as engravings in 1764-65 and offered for two guineas per set. The present work represents Plates I and II in the album 'The Van and Rear of All his Majesty's Ships and Transports' and was painted by Serres, probably as a commission from the family of Admiral Keppel.

The present painting, and the Havana series of paintings as a whole, represent an important turning point in Serres's reputation and career. The Keppel family dominated the 'Havana' campaign and following Serres's production of Orsbright's drawings, various members commissioned versions of certain views from the set to display in their country houses. Their example was later followed by other commanders and captains who also wished to commemorate their naval triumphs and chose Serres as the most fashionable and favoured marine painter in England.

The full set of twelve engravings of 'The Capture of Havana, 1762.' is in the collection of the National Maritime Museum, London and only seven of Serres' paintings of this series, excluding the present one, had been known to scholars until this sale.

This scene may feature the Royal Sovereign.

Peter Monamy was at one time listed, in the 'Catalogue of Engraved National Portraits,' as being 'reckoned the finest painter of shipping in England.' Trained as both painter and house decorator, it was his marine scenes that accrued his fame and recognition, including high esteem from active seafaring men, who claimed 'the forms and buildings of shipping with all the tackles, ropes and sails which he thoroughly understood made his paintings of greater value.'

In the high point of his career, Monamy headed a considerable studio, and a number of assistants would have been involved in painting production. Many of Monamy's works were well-known through the substantial prints created within his life-time, and widely reproduced posthumously.

This painting was sold with an illustrious provenance, as part of the house contents of Torridon: Home of the Earls of Lovelace. A dramatically located house, designed for family living and the hosting of hunting and shooting parties in the summer season, it had become a repository of items collected throughout the fascinating history of the well-connected and travelled King family. From Sir Peter King (c.1669-1734), the maternal nephew of the philosopher John Locke, who became the Lord Chancellor through to the 8th Baron, who became 1st Earl of Lovelace under Queen Victoria and married Ada Byron, the only daughter of celebrated poet Lord Byron and recognised herself as a significant mathematician, and the first computer programmer, to the African and Big Game connections of Sir Peter, the 4th Earl (1905-1964). The collection was sold by the 5th Earl and his wife. 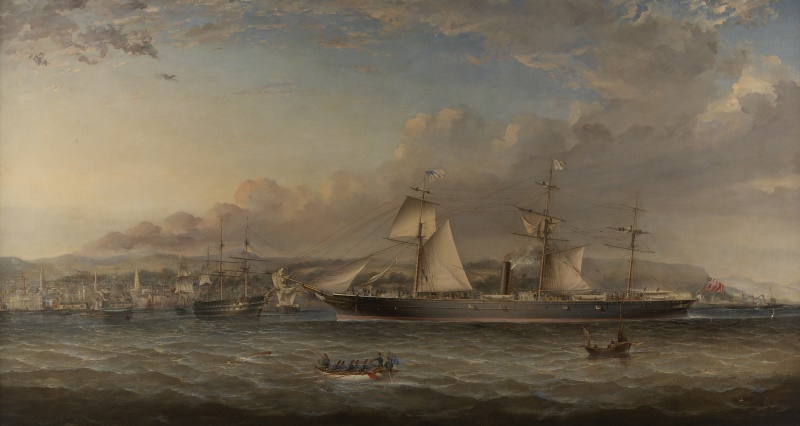 The 1,322 ton iron built screw steamer 'Columbia' was launched in 1866; she was 2,833 feet in length, 33.6 feet beam, and 29.4 feet depth of hold. She was in the service of the Anchor Line (Handyside and Henderson) of Glasgow and until 1894 she was used mainly for carrying immigrants to and from the United States; the present picture where she is wearing the USA flag at the foremast, probably shows such a scene at Greenock. In the background can be seen not only the factory chimney skyline of the town, but the custom house, a distant view of Ardgowan House and Well Park Church. The 'Columbia' was also used for trade to India until she was sold in 1894 to an Italian Company, when her name was changed to 'Francesco Crispi'. Her greatest moment during her employment by the Anchor Line came while on a trip between London and Boston, she rescued the 'Batavia' of the Cunard Line, who had got into difficulties, and towed her on a 560 mile journey to the Azores.

Entries are invited for our forthcoming Five Centuries: Old Master to 19th Century Art auction until 20 April 2018. To find out more, or for a complimentary valuation, contact our specialist team.