An Adventure in Wood

An exhibition of work by the designer John Makepeace opens at Court Barn this Autumn sponsored by Lyon & Turnbull. ‘John Makepeace – An Adventure in Wood’ looks at the story behind the pieces of furniture, John’s inspiration and the very distinctive rationale behind each piece.

At the start I was moved by  Williams Morris’s philosophy. Intuitively, as a designer of individual objects I could relate more readily to Art Nouveau rather than the industrial aesthetic promulgated by the Bahaus. Rather than designing to express machines, the driving forces are now a blend of humanity and technology. I want to make objects that engage us through their form, structure and materials.

Work on display includes the chairs Serendipity 3, the arms and back are integrated in a subtly shaped aluminium casting linking the four legs, Trine, Miro and a mock-up of Knot 2, a play on words. A cabinet “Arcade” and “Vault” table which explores design and structural issues.

John Makepeace's career has been described as an adventure in wood. He first saw fine furniture being made when he was eleven, and then he visited the great cabinet makers in Copenhagen as a teenager. Design and craftsmanship came naturally to him.

Early professional recognition led to his work as a design consultant to the all India Handicraft Board, a founding member of the Crafts Council in the UK and a Trustee of the V&A, London. Early commissions from Templeton and Keble College, Oxford, Liberty's, Banque Générale du Luxembourg, have been followed by international museums, corporate and private clients.

Keenly aware of the need for an integrated education for furniture designers and makers going into business, he bought Parnham House, Dorset in 1976 to set up a college alongside, but separately from, his own furniture studios. Parnham rapidly gained an international reputation. 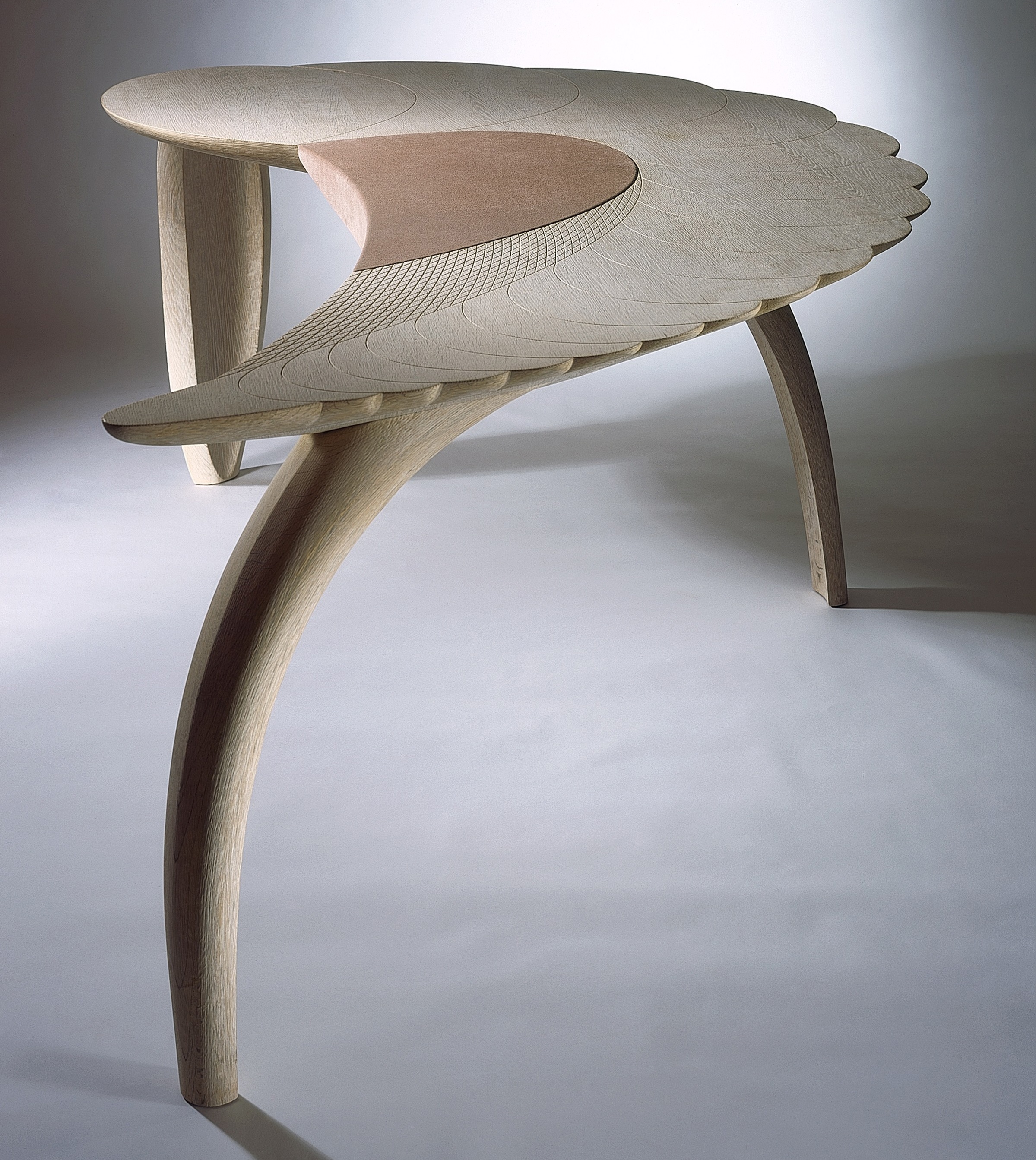 The clearance of forests to fuel the Industrial Revolution and Britain's consequent dependence on imported timber led to the purchase of Hooke Park, the 350 acre woodland nearby. The subsequent European programme of collaborative research explored the improved utilisation of indigenous timber and resulted in a series of award-winning buildings for the new campus. After a very successful 25 years the College amalgamated with the Architectural Association in 2001.

Since 2000 Makepeace has been leading initiatives with the V&A to encourage craftspeople and businesses to be more adventurous in their approach to design. Makepeace’s work is represented in numerous collections including V&A, London, The Fitzwilliam Museum, Cambridge, Museum für Kunsthandwerk, Frankfurt and The Art Institute of Chicago, Chicago.

John sold Parnham in 2001 and bought Farrs, a historic house in Beaminser not sold since it was built in 1730. Here he has his design practice, gallery and impressive range of indigenous trees seasoning for future commissions. With his wife, Jennie, they open the house and gardens for charity and group visits.

In 2004 John received a Lifetime Achievement Award from the American Furniture Society, and in 2010 from the Furniture Makers Company. He is an Honorary Fellow of the Arts University Bournemouth (2009) and Hereford College of Arts (2013).

John Makepeace – An Adventure in Wood

Adults £5; Children under 16 are free

Jewellery Masterclass with Lyon and Turnbull.

A fascinating insight into the world of Arts and Crafts gems and jewels and a new appreciation of the skill and craftsmanship required to create them. Have something at home? Bring it along to find out more.

3pm: One-on-One - John Makepeace looks at the story behind his pieces of furniture

4pm: An Eye for Design Paul Reeves in conversation about the recent sale of pieces through Lyon and Turnbull from his collection including furniture, metalwork, lighting and more.

Followed by a drinks reception