John Atkinson Grimshaw’s innovative, sensitive portrayals of the atmosphere and ‘feeling’ of urban Victorian life led him to be considered one of the most accomplished British artists of the nineteenth century. This May, two works by Atkinson Grimshaw will lead the paintings section of our Spring 2022 Five Centuries auction.

John Atkinson Grimshaw’s innovation was to apply Ruskin’s tenet of ‘truth-to-nature’ to scenes of Britain’s burgeoning industrial centres. Owing to his sensitive portrayal of the atmosphere and ‘feeling’ of urban life, he has been considered the artistic equivalent of the great Victorian novelists Charles Dickens and Elizabeth Gaskell. We are delighted to be offering two paintings by one of the most accomplished British artists of the nineteenth century.

Atkinson Grimshaw was born in Leeds in 1836. By 1860 he had left his position as a Northern Railway clerk to become a full-time painter, much to his parents’ dismay. His early artworks were generally landscapes and still lifes of fruit, flowers and birds rendered with a detailed intensity inspired by the Pre-Raphaelites. He also worked from photography, a relatively new medium, and is believed to have implemented camera obscura projections onto his canvases to refine his compositions.

His career breakthrough came in 1867 when a painting of Whitby harbour at night was received to great acclaim. The urban nocturne dominated Atkinson Grimshaw’s output forthwith, as he pursued ever-more subtle and complex ways to illuminate his compositions. Contemporary urban audiences identified with his nighttime streetscapes lit by gas lamps, which effectively evoked the dynamism and isolation of the industrialised town.

Atkinson Grimshaw travelled to various towns and harbours to study their architecture and imbibe their atmosphere. The locales he most frequently painted (Glasgow, Leeds, Liverpool, Whitby, Scarborough and London) reflect the distribution of his market. In the mid-nineteenth century innovative contemporary art was generally patronised by wealthy industrialists in the north of England and Scotland. Such was the case with the Pre-Raphaelites, whose aesthetic initially proved too challenging for traditional London tastes but flourished in northern industrial centres. Atkinson Grimshaw’s market developed along similar lines, and it was not until the 1870s that London collectors began to invest in his work in earnest.

By 1870 he was successful enough to rent Knostrop Hall, a seventeenth-century mansion represented in Evening in Knostrop (£60,000 - £80,000 + fees) featuring in our May 2022 Five Centuries auction. The Hall was built for Adam Baynes (1622-1671), the first Member of Parliament for Leeds, and its Jacobean architecture would prove an enduring inspiration which Atkinson Grimshaw would continue to paint for the rest of his life. Evening in Knostrop depicts a solitary, fashionably-dressed figure waiting at the gate to the house. The shadowy landscape under the pale sky successfully evokes the ambience of Knostrop’s grounds in twilight. 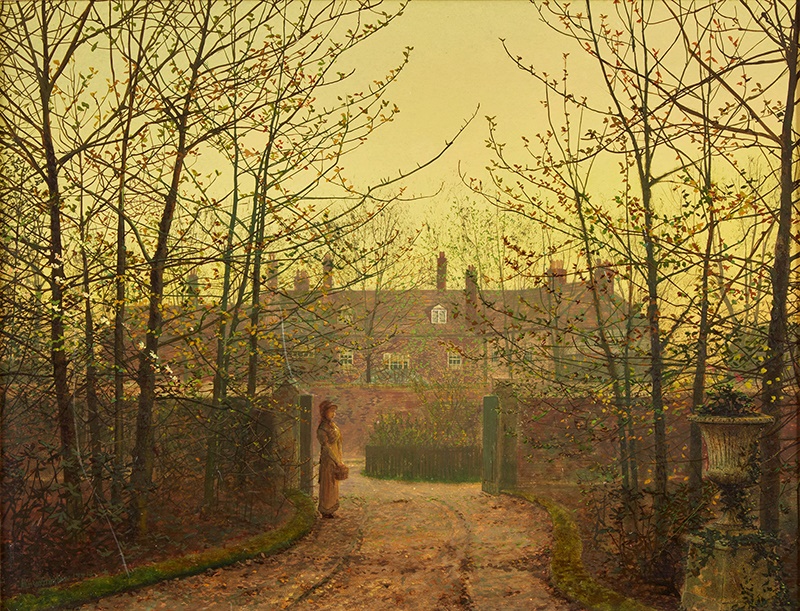 Between 1885 and 1887 Atkinson Grimshaw lived in Chelsea, London near the studio of the American artist James McNeill Whistler. The pair became good friends and bonded over their shared interest in painting city living, although Whistler implemented a more impressionistic technique. Whistler would later comment ‘I thought I had invented the nocturne, until I saw Grimmy’s moonlights’.

This Greenock scene exemplifies Atkinson Grimshaw’s mastery of ephemeral light. Greenock is situated on the River Clyde around 22 miles from Glasgow, and in the 18th and 19th centuries was a thriving and populous shipbuilding hub. Atkinson Grimshaw delineates the architecture with sharp precision, which serves as a visual counterpoint to the soft, delicate palette. While muted tones evoke the damp evening haze, points of tonal intensity draw the eye to the bustle of activity across the quayside, from the moored ships’ blinking lights, to the carriages conveying silhouetted figures, to the warm glow emanating from the row of smart shops.

Greenock was painted a year before his untimely death from tuberculosis in 1893. Several of his children also became painters, including Louis Grimshaw, a son born in 1870. Louis trained under his father, and for a spell the pair painted collaboratively, with John executing the sky and landscape and Louis working on the figures. Like his father, Louis generally painted nocturnes, but he diverged by predominantly representing London. Louis’ career as an artist was relatively brief, as he gave up painting in 1905 to work as a cartographer for the Manchester Guardian, and his paintings are consequently rare.

Our May Five Centuries auction will also include Houses of Parliament, painted by Louis Grimshaw in 1988. It is a particularly fine example of Grimshaw’s oeuvre. His father’s influence is clear in the muted palette, luscious atmosphere and accomplished handling of light. Despite electing to portray a quintessential London view, Grimshaw approaches the scene with remarkable insight and originality.

As one of the United Kingdom's premier fine art auctioneers and one of the longest established in Europe, we have developed an extensive client base internationally.