Walking into the recreation of the living room of Villa de Varenna, the family home of Piero Fornasetti's on Lake Como, at the retrospective exhibition La Folie Pratique, one was overawed by the ferocity of the vision of one man ahead of his time.

In 1958 Piero Fornasetti had the idea to create one room completely in his black and white designs. The Stanza Metafisica (Metaphysical Chamber) surrounded the viewer with 32 monochrome lithographically printed trompe l'oeil panels depicting doors, windows, ladders and steps and was an intense evocation of his style.

Piero Fornasetti began as a painter in the 1930s, but it was in his lithography and graphics that he excelled and placed him amongst the most iconic designers of the 20th Century. Italian designer and architect Gio Ponti was one of the first to spot his potential in the 1940s after seeing his work transposed onto silk head scarves at the Milan Triennale in 1933, which began a collaboration between the two designers transposing his graphics onto furniture.

PIERO FORNASETTI (1913-1988)
UMBRELLA STAND, CIRCA 1950
brass, lacquered and lithographic transfer of hats on a stand over board,
printed marks FORNASETTI/ MILANO/ MADE IN ITALY , 56.5cm high, 26cm diameter

One of the best examples of this collaboration was the the Architettura Cabinet, originally conceived around 1951. The wooden chassis was designed by Gio Ponti and in form is a combination somewhere between a bureau bookcase, a bar and a credenza, covered in lithographic prints after designs by Fornasetti. As one opens the classical facade doors, the viewer descends into a classically columned hallway disappearing into the distance. It is a pure piece of theatrical design and is the epitome of Fornasetti's and Italian design of the period, in its combination of hand crafted processes and mechanical methods. 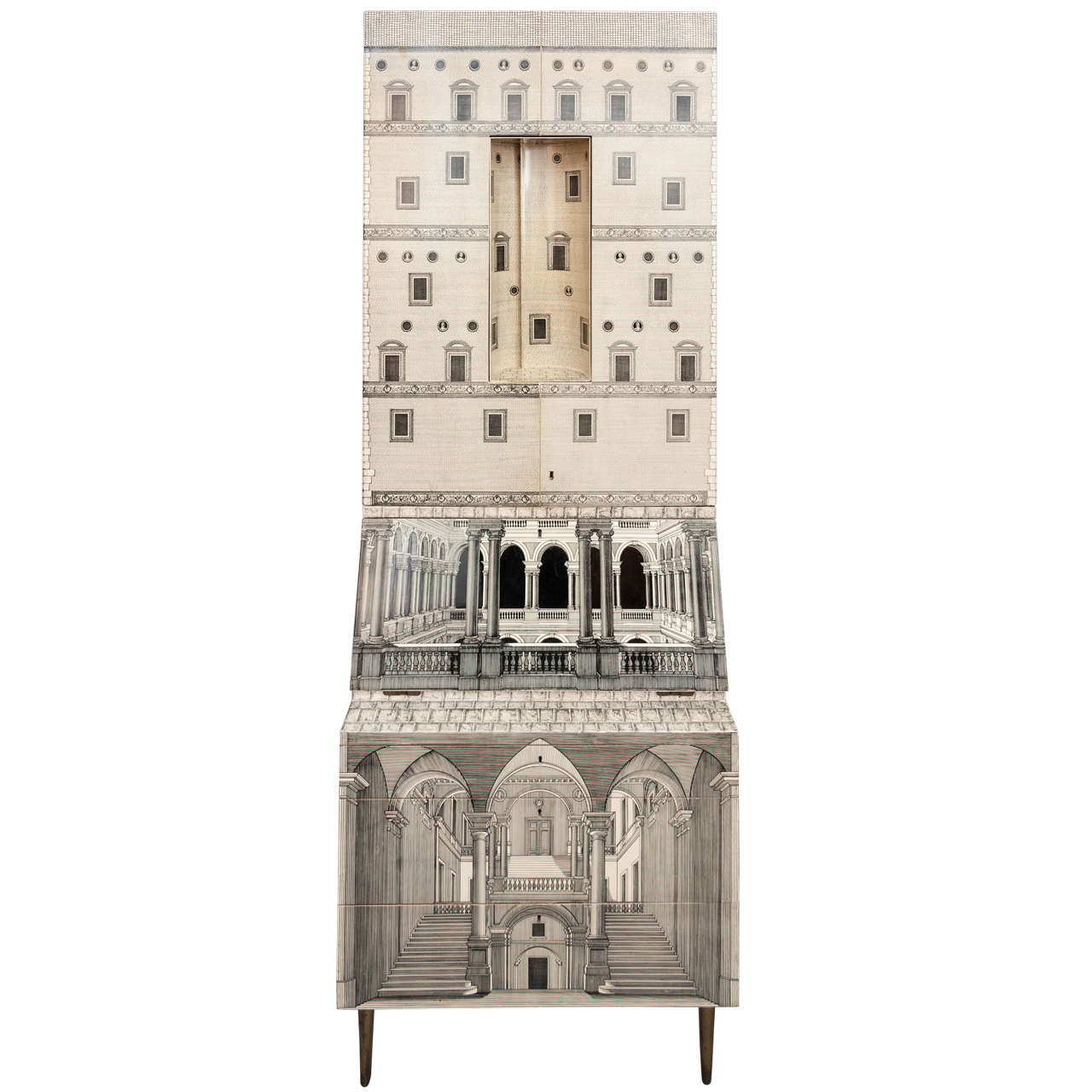 The most recurrent theme in his work is his depiction of the Italian opera singer Lina Cavalieri. After discovering her image from an old 19th Century French magazine, he became enchanted, and again and again he used her face in his graphics, including on his most prolific series Themes and Variations, with no less than 350 versions on plates, paperweights and candlesticks. Beginning in 1952 he transposed her profile at his whim, creating Lina with moustache, Lina as hot air balloon, Lina winking, Lina broken in half, Lina as hour glass and Lina deep sea diving amongst many other variations demonstrating his wit and imagination.

PIERO FORNASETTI (1913-1988)
'STRUMENTI MUSICALE' THREE FOLD LACQUER SCREEN, CIRCA 1955
decorated to each side, lacquered and lithographic transfer over wood board on castors
each leaf, 50cm wide, 129.5cm high

Piero Fornasetti's work nowadays has transformed from being a whimsical aside of Italian design to an incredibly commercial international brand and prices at auction rising with this, although some pieces are still affordable. His Surrealist concoctions transposed onto trays, chairs, tables and ceramics, produced not in a factory but by an artisan workshop, are instantly recognisable objects of the mid-20th Century period and are desirable as a counterpoint to the ultra-sleek lines of modernism.

Our Decorative Arts & Design departments hold auctions throughout the year in both Edinburgh and London. To find more about buying or selling in this auctions contact one of our specialists.