Our highly anticipated flagship auction of Scottish Paintings & Sculpture on 4 December reached over £1 million. More than 650 international bidders registered for the sale ensuring a selling rate of 90% across 223 lots demonstrating the best of 19th and 20th century Scottish art.

"It was great to see the strong appetite for buying continue with this sale and we were delighted to see such strong results for traditional names like Louise Bosworth Hurt and Alfred de Breanski, as well as 20th century favourites such as Joan Eardley” said Head of Scottish Paintings & Sculpture Nick Curnow. “This sale in particular attracted a lot of international interest with a selection of the significant pictures going to new homes in America."

A private collection of watercolours by Sir William Russell Flint (1880-1969) offered as a stand-alone catalogue included some of the finest works by the artist to be offered at auction for some time. The 20 works (15 of them sold) covered the artist’s wide subject matter, which spanned picturesque gypsies and sensuous nudes, to luminous landscapes and seascapes of Scotland, France, Italy and Switzerland.

The Silver Frock, the quintessential Russell Flint watercolour of favourite model Cecilia Green in a taffeta dress, sold at £32,500*. This diminutive 11 x 26cm work is best known from a popular limited-edition print made shortly before Russell Flint died in 1969. 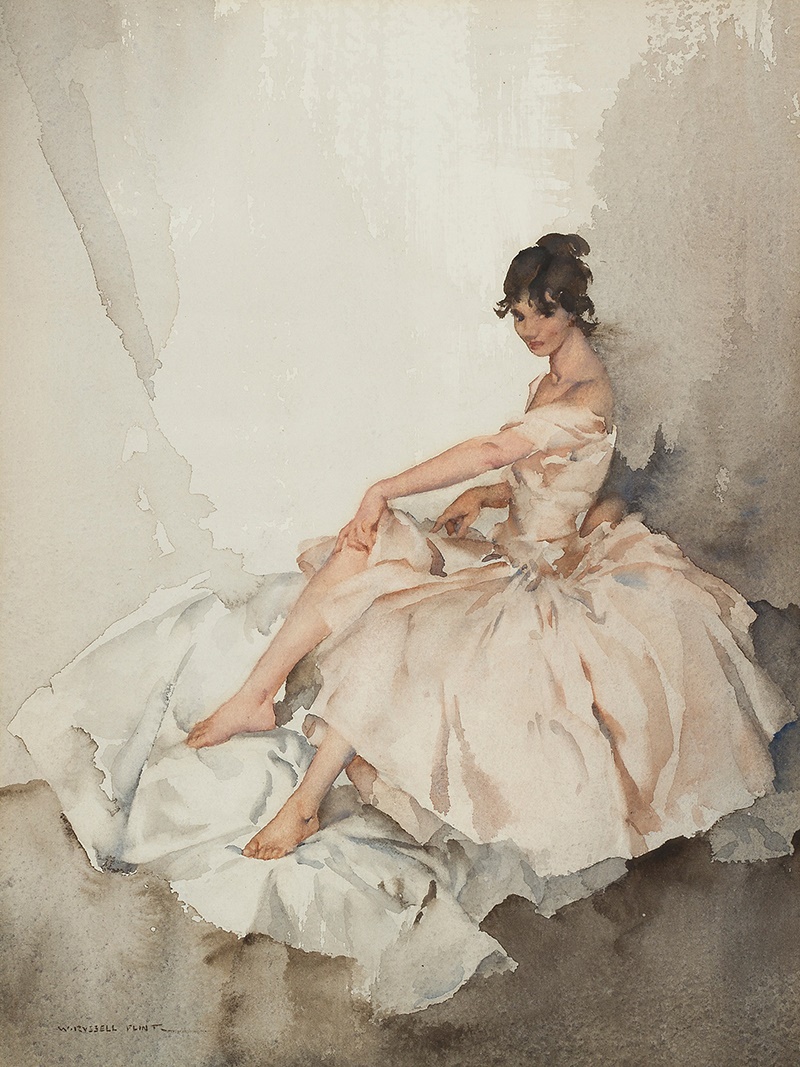 Signed, inscribed on the backboard verso 'For Norman Wilkinson C.B.E. March 1964, Norman please accept this little watercolour in recollection of our happy friendship of 60 years Willy, 6.3.64,'

Jemima, a 30 x 23cm watercolour of perhaps the same model in a peach dress, was signed an inscribed to fellow artist Norman Wilkinson and dated March 1964. It read “Norman please accept this little watercolour in recollection of our happy friendship of 60 years Willy, 6.3.64”. Exhibited that year at the Royal Institute of Painters in Watercolours, it sold for £23,750*.

Discover more about Peploe's 'Interior with Girl in White' ⇒

Peploe’s Interior with Girl in White can be dated with some good deal of accuracy to c.1905-09 when the artist, enjoying his first one-man shows, began to paint more freely, employing a delicate spectrum of greys, whites and pinks. By the end of the decade he had moved to Paris and fully embraced the style (and accompanying controversy) of the Fauves.

This 102 x 76cm oil, with its model captured informally perched on the arm of a chair while reading her paper, was clearly favoured by his close friends and supporters. Among its previous owners was the artist’s own brother, Willy Peploe. It sold at £62,500*.

George Leslie Hunter’s transition from solid, traditional painter to a colour-obsessed member of the avant-garde occurred in the years between 1906, when he returned from earthquake-devastated San Francisco to his native Glasgow, and the outbreak of the Great War. His 19 x 48cm oil on board depicting figures on a beach, sold for £23,750*, was painted on Hunter’s second trip to Étaples in 1913. The picturesque town on the Channel was the place where Hunter first embraced the Post-Impressionist tendencies that were to become signatures of his work. It was also the site of his arrest: as a lone figure who made frequent visits to the harbourside he was briefly incarcerated as a suspected German spy!

Three pastel drawings by Joan Eardley (1921-63) were eagerly competed. Most highly rated was the 18cm x 11.5cm sketch of Children in a Street with a provenance to the artist’s studio that made a multiple of its estimate at £20,625*.

A View of Edinburgh from the North-West by Alexander Nasmyth (1758-1840) was painted in 1822, the same year as George IV’s historic visit to the city. In this layered landscape, one that adhered to the fashionable Enlightenment idea of ‘man’s place within the order of nature’ Nasmyth chose to place the Edinburgh skyline in the far distance, framed by it distinctive topography with forestry and a rural landscape in the immediate foreground. Deemed one the artist’s finest works, it was rewarded with the sum of £32,500*.