World record prices were achieved for works by Joan Eardley and Bessie MacNicol in our most recent sale of Scottish Paintings & Sculpture, as commercial interest in women artists continues to grow.

Joan Eardley’s reputation as one of the leading British artists of the 20th century is based on her singular portrayal of the down-at-heel Townhead district of Glasgow and, in particular, its children. She explained “I like the friendliness of the back streets. Life is at its most uninhibited here. Dilapidation is often more interesting to a painter as is anything that has been used and lived with.”

The 08 December sale boasted an outstanding example, the square formal oil and collage The Yellow Jumper painted in the artist’s final year. 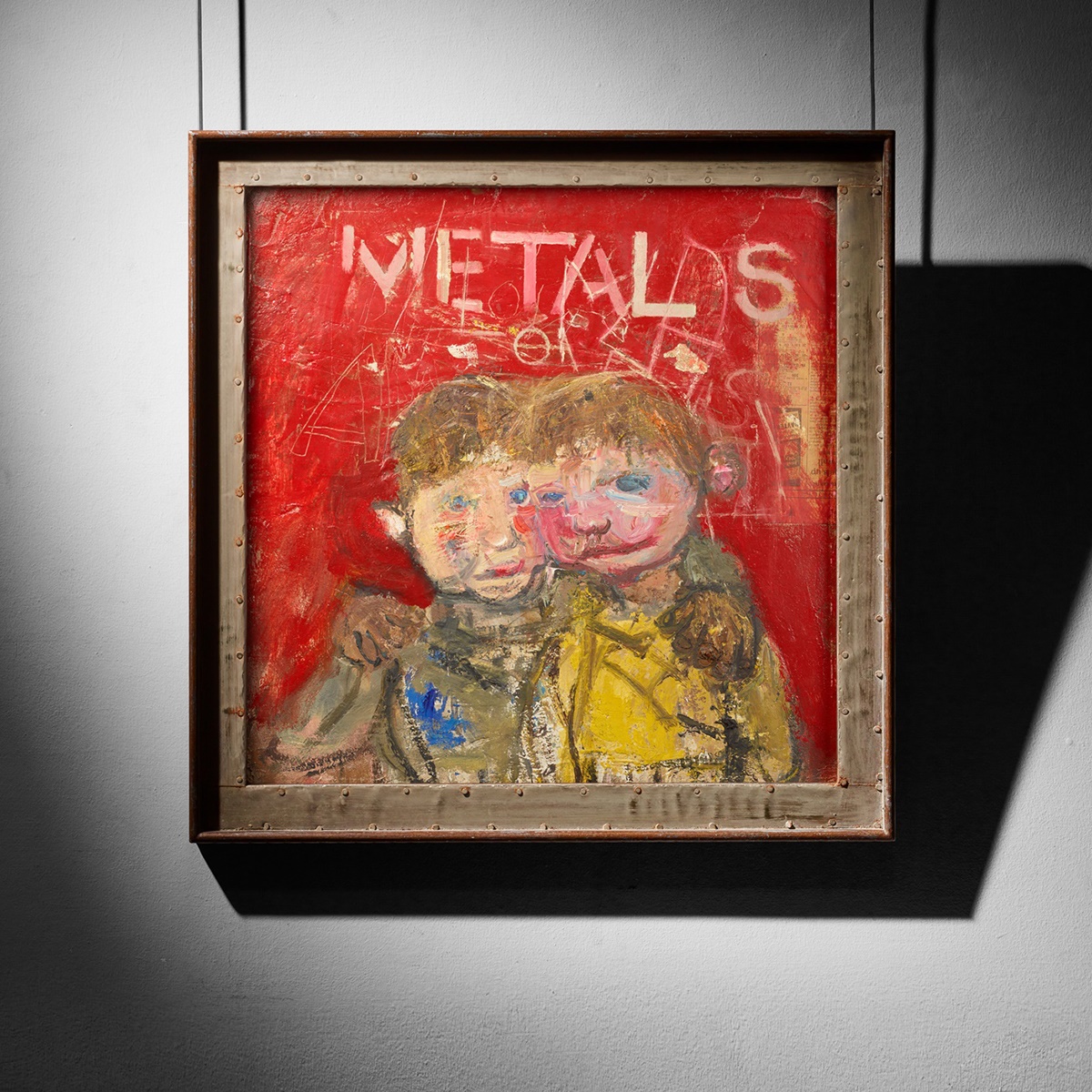 It depicts two members of the Samson family – the children who would often sit for Eardley in return for drawing paper and a few pence to spend at the sweet shop. The red background is the graffiti-covered wall of the scrap-metal business that traded from the ground-floor of the building where Eardley had her studio. The collage of sweet-paper wrappers, foil from cigarette packets and newspaper scraps represent the detritus of urban Glasgow while the title is a reference to the hand-me-down sweater worn by one of the sitters. Eardley often re-used canvases and there is a painting of Glasgow tenements on the reverse of The Yellow Jumper.

In short, this work encompassed all you could wish for in a Glasgow painting by Eardley, its status reflected in a record-breaking sum of £200,200*.

Works by Glasgow Girl Bessie MacNicol – who died in childbirth in 1904 -are cherished in various public collections and rarely appear on the market. Elizabeth, a highly assured oil on canvas signed and dated 1897, was painted when MacNicol had acquired a studio on St Vincent Street in Glasgow and was earning favourable comparisons with her male contemporaries. At her funeral, the all-male Glasgow Art Club members’ tribute praised her as ‘a true artist’. In this strong portrait composition, an elegant female sitter, reading with her head tilted backwards, draws clear influence from Whistler, as well as from the Impressionists who inspired MacNicol during her sojourn in Paris. 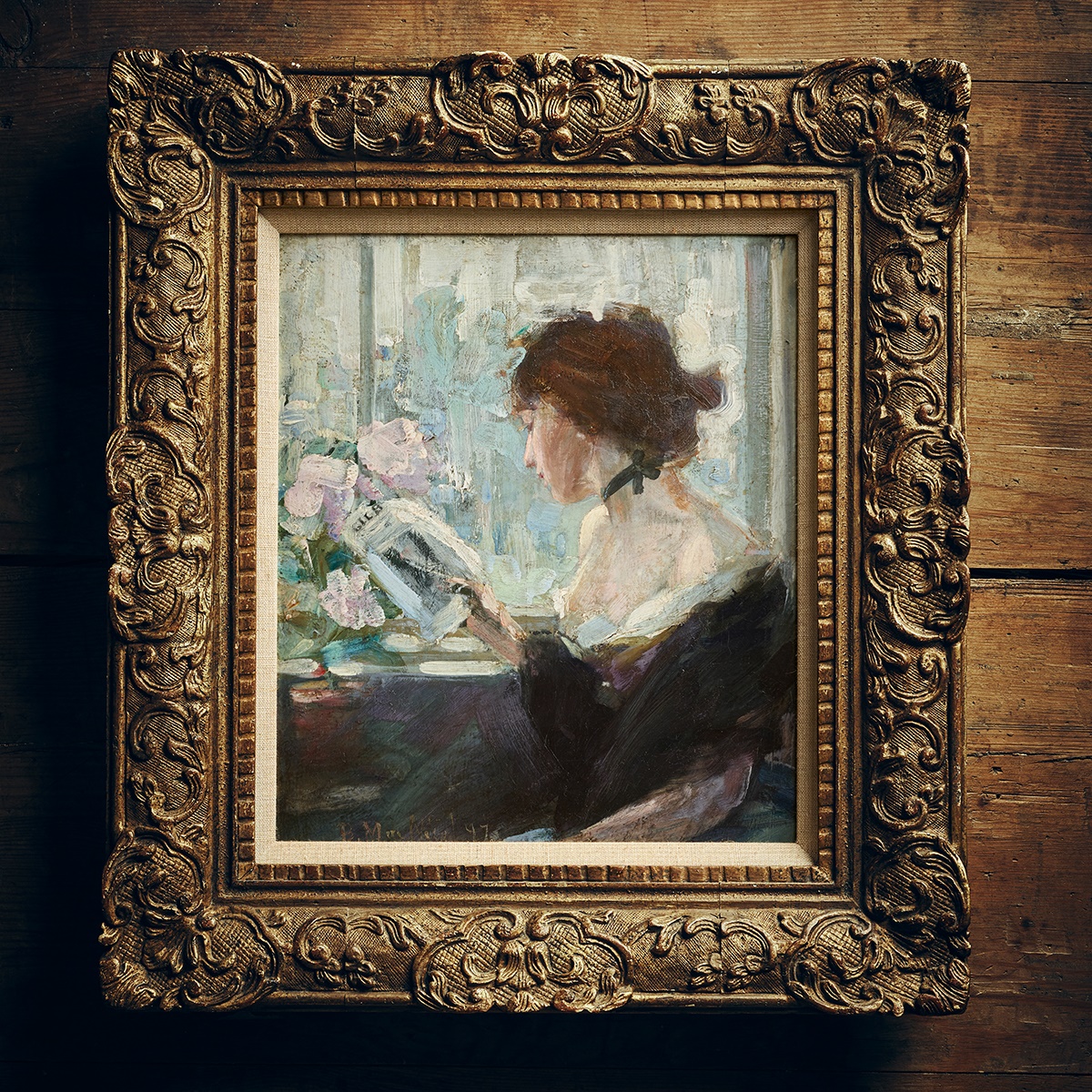 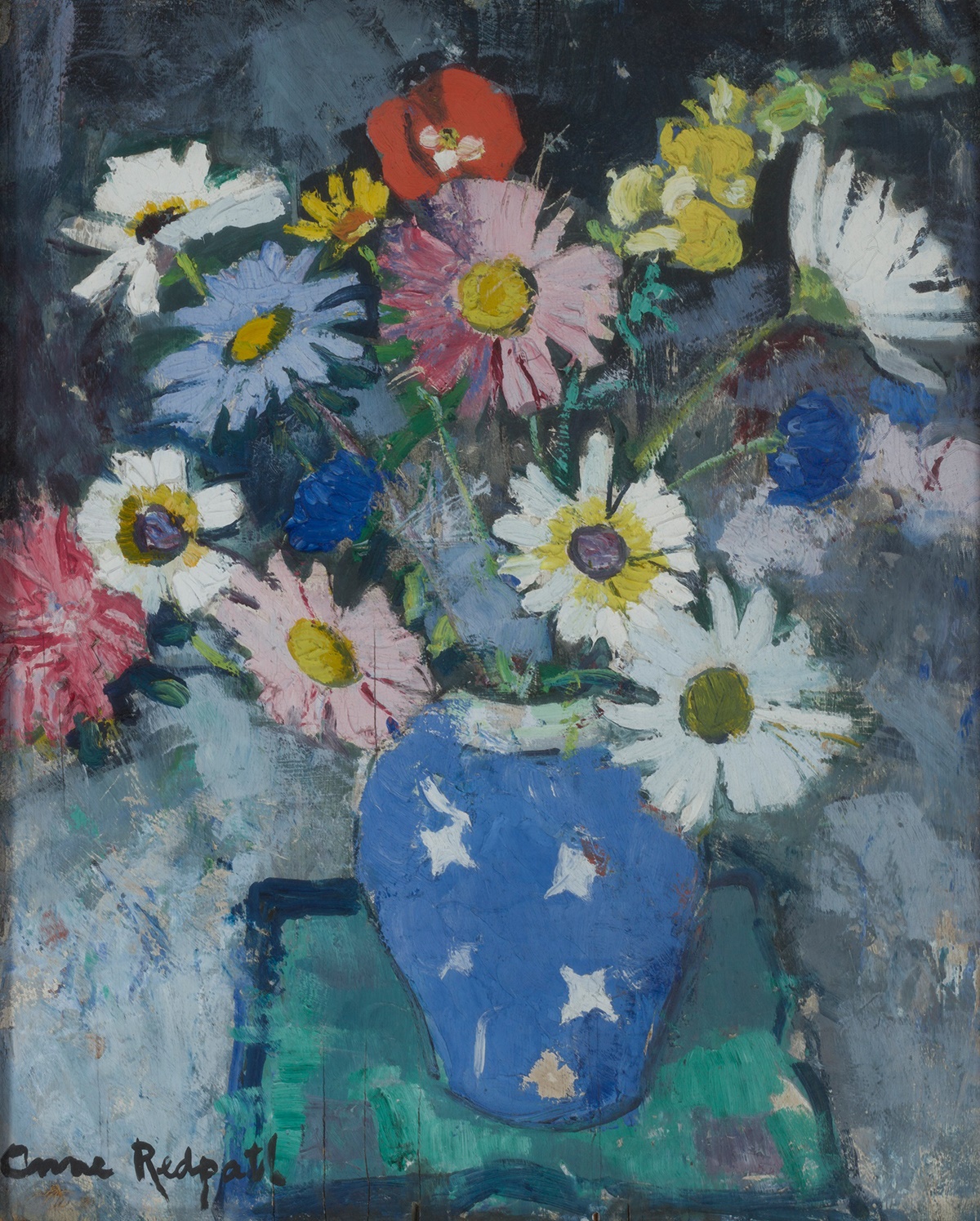 Redpath’s quintessential still life Marguerites in a Blue and White Vase took £30,200* while Gibson Nasmyth’s 1836 landscape Crossing the Bridge in a Storm made £15,120*.

Signed and dated works by any of the Nasmyth daughters appear on the market infrequently, and Anne Gibson Nasmyth’s (1798-1874) paintings are particularly scarce with fewer than 20 works attributed to her.

Another rare and significant 19th-century work in the sale was The Barge of the Fairy Mab by William Bell Scott (1811-1890). He is best-known for his history paintings of the 1850s and 60s and his association with the Pre Raphaelites, but earlier in life was part of the group of painters known as ‘The Clique’ founded by the renowned fairy painter Richard Dadd. 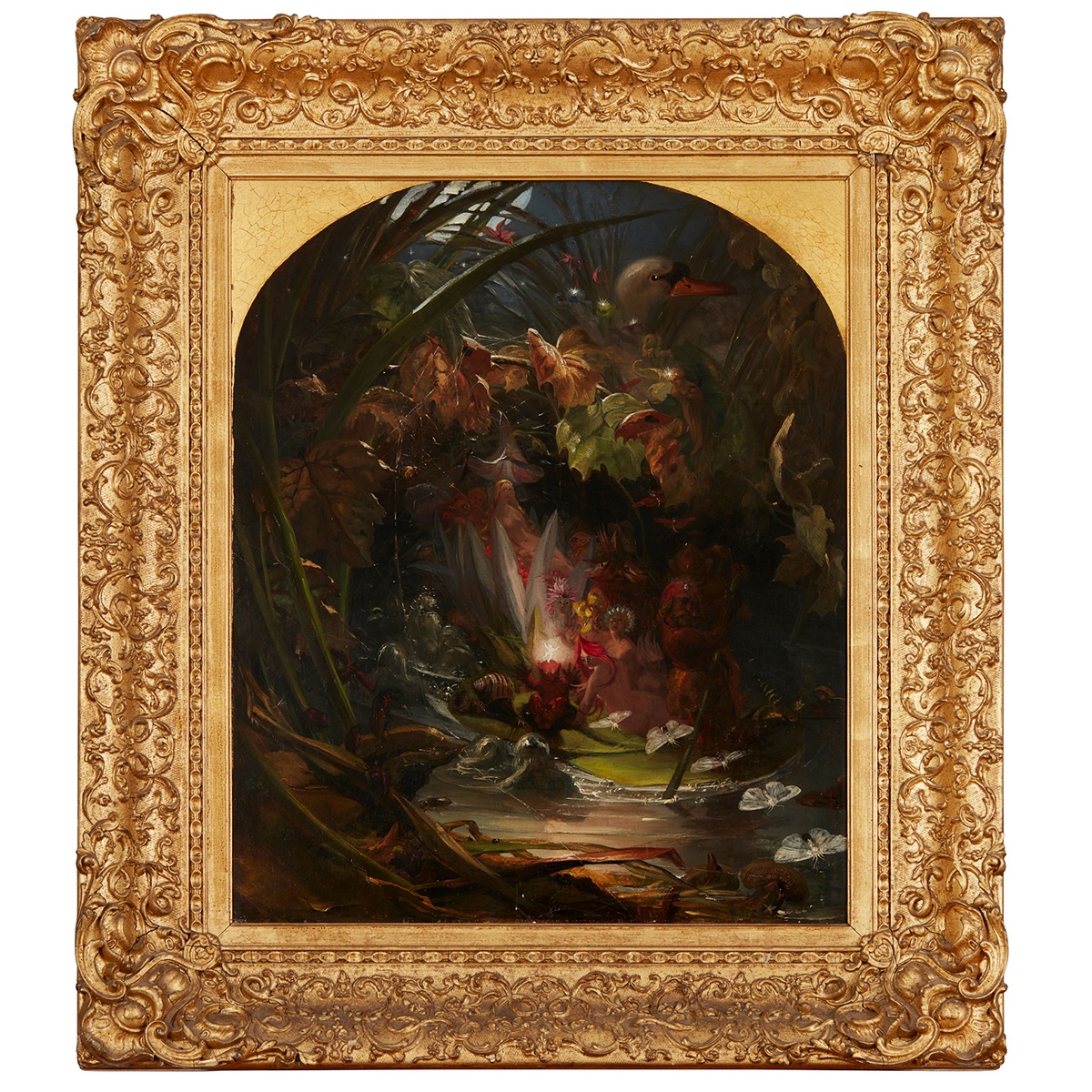 This painting, exhibited at the Royal Scottish Academy in 1845, was labelled verso 'Government School of Design' – a reference to the position of Master of the Government School of Design at Newcastle-upon-Tyne, that Bell Scott held for two decades from 1843. An example of Victorian fairy painting at its best with a provenance to Careston Castle, Brechin, it sold for £20,160*.

Works by the Scottish Colourists John Duncan Fergusson (1874-1961) and Samuel John Peploe (1871-1935) performed particularly well, contributing significantly to the overall total of £1.32million* (some 40% above the global estimate). Along with a selling rate of over 87% these results made Lyon & Turnbull’s December auction the most successful dedicated Scottish art auction of the season. 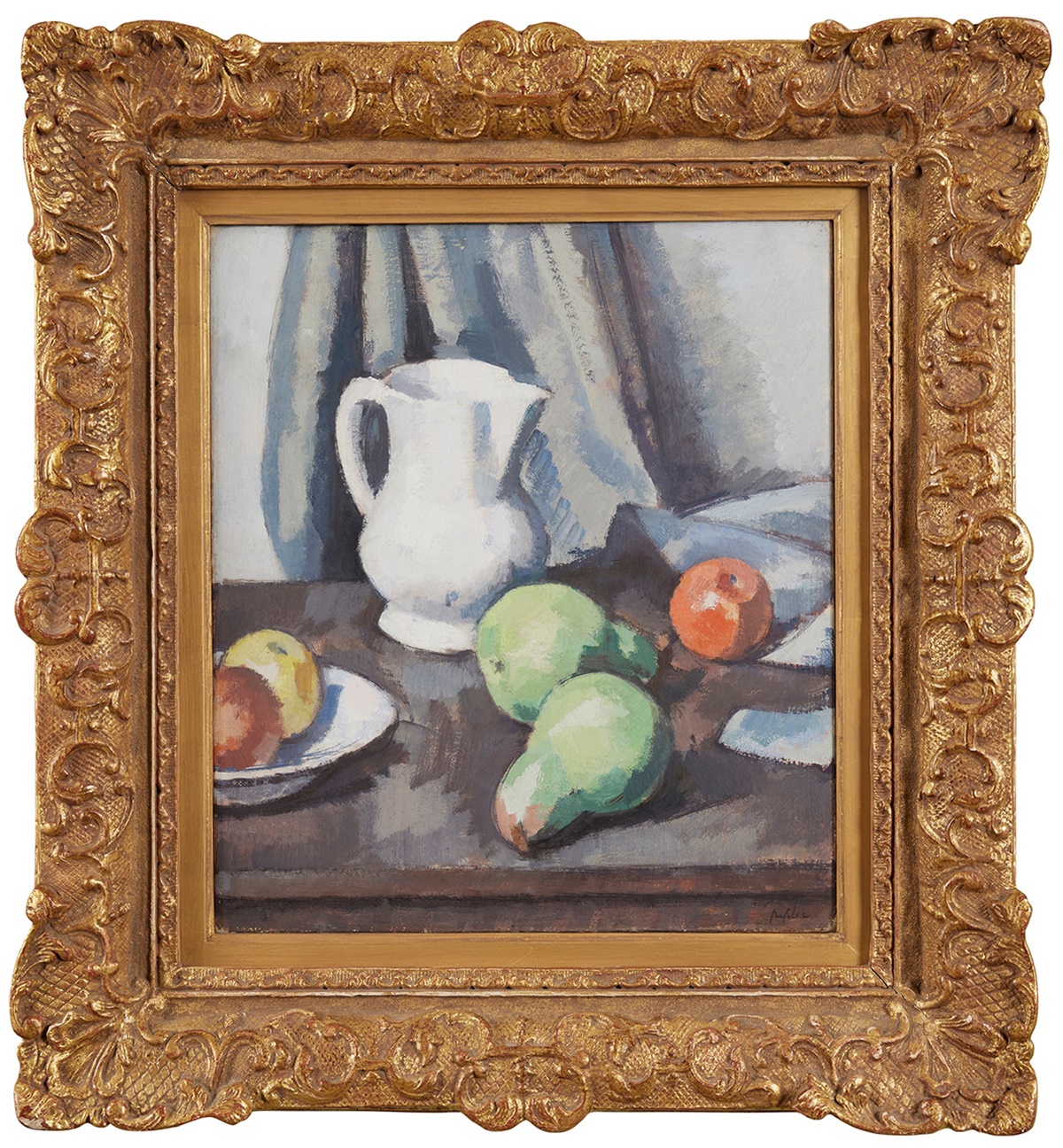 Still Life with Jug and Pears from c.1925 displayed Peploe’s mastery of the still life genre by the 1920s. He summed up his dedication to the theme in 1929, when he declared: ‘there is so much in mere objects, flowers, leaves, jugs, what not – colours, forms, relation – I can never see mystery coming to an end.’ Alongside a cast of cherished objects, including jugs, plates, bowls and various lengths of fabric, Peploe would often introduce flowers or fruit to his arrangements according to the season. The apples and pears in this composition would suggest that it is an autumnal painting. It sold above estimate at £137,700*. 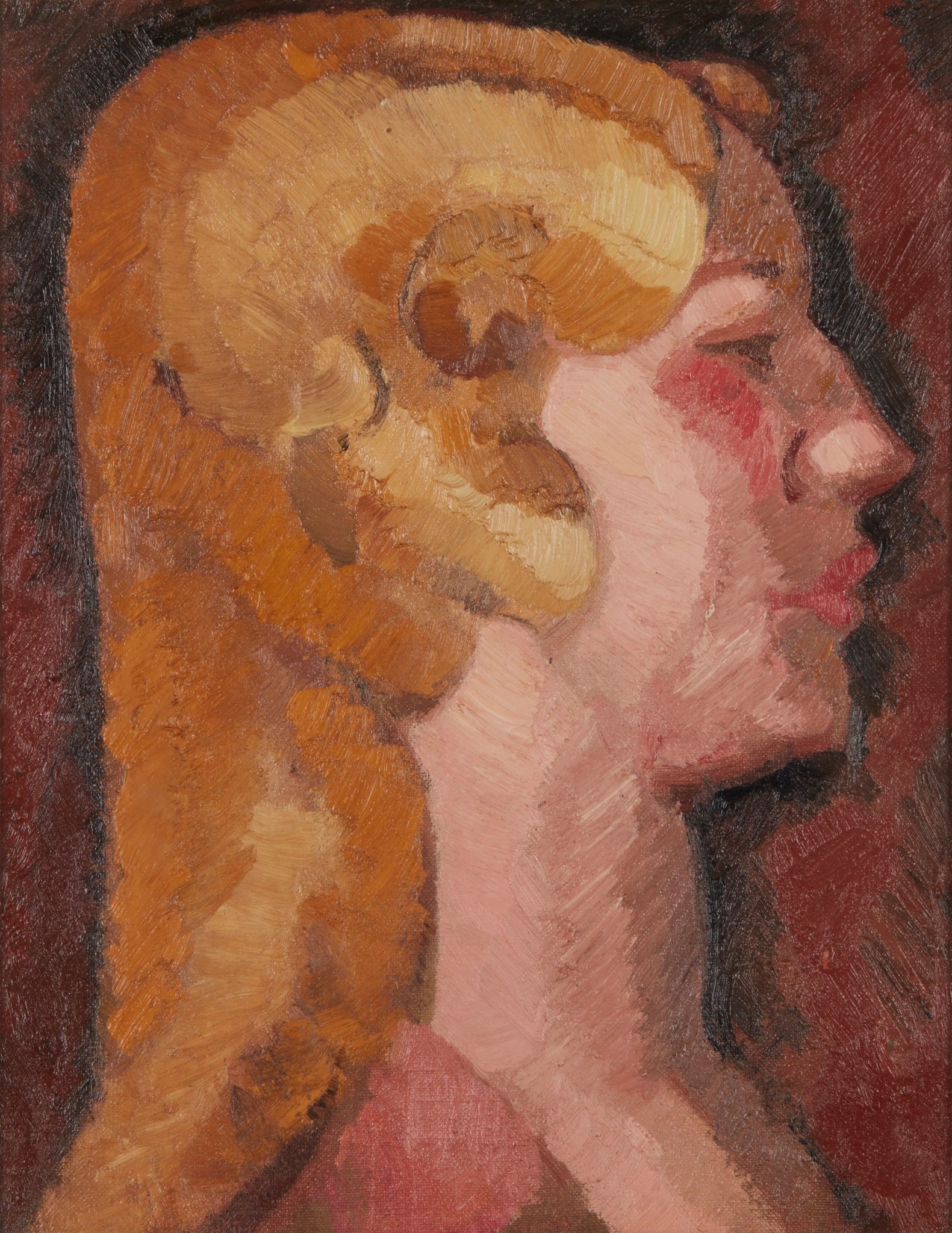 Fergusson’s Stability comes from a series of female heads painted in 1916. At the time the artist was living in Chelsea, assimilating himself into London’s avant-garde set with ease. The 33cm x 25cm profile, displaying a knowledge of Matisse and the Fauves, was one of 32 paintings and four sculptures shown in Fergusson’s solo exhibition at The Connell Gallery in the English capital in May 1918. Its appearance on the auction block in December 2022 brought in a mighty £70,200*. 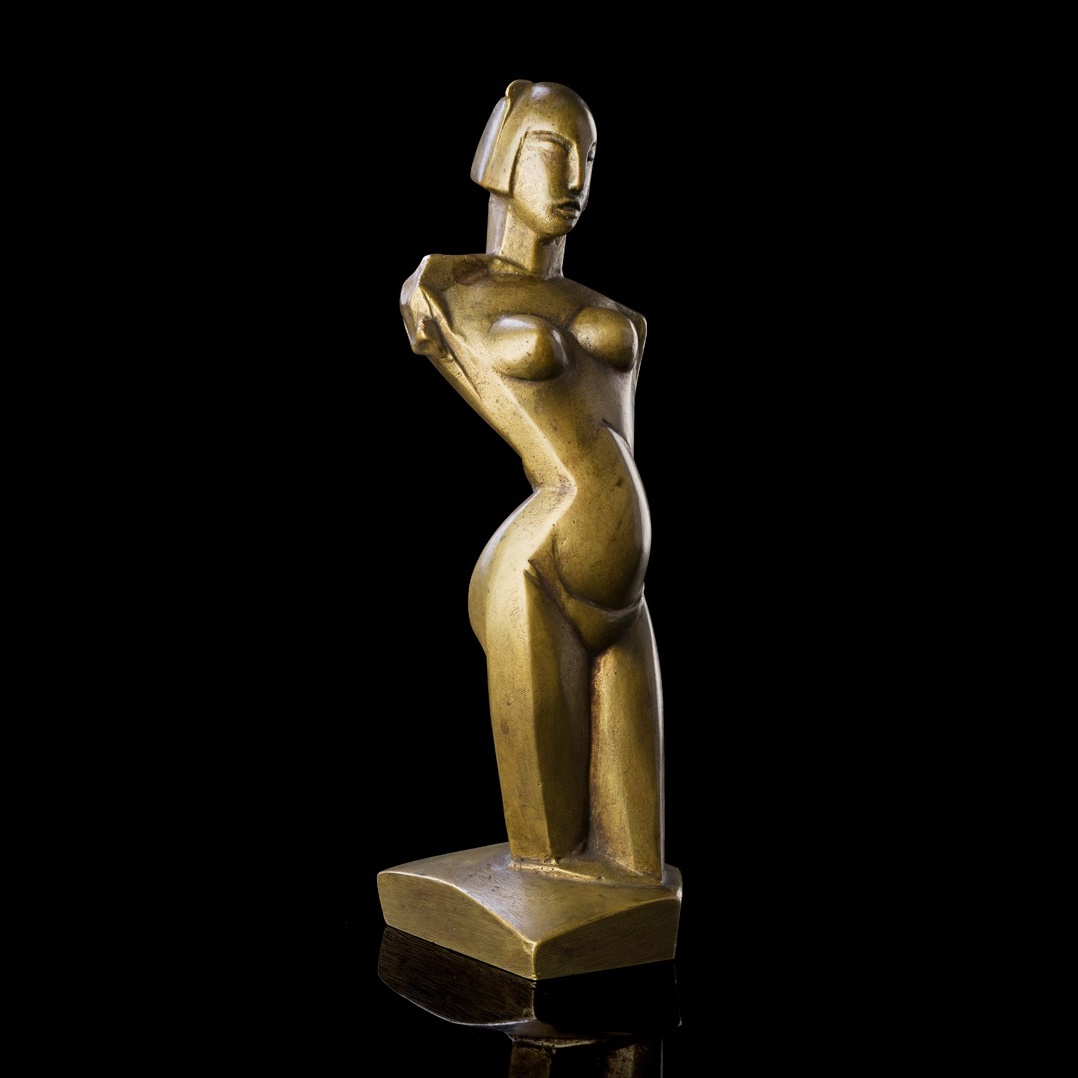 Fergusson is the only one of the four Colourists to have worked in three dimensions. He made sculpture over some 50 years, although the Modernist bronze Standing Female Nude dated from his most productive period, the years approximately 1918-22. Cast at a later date, its appearance on the market aroused great interest and sold for £52,700*. 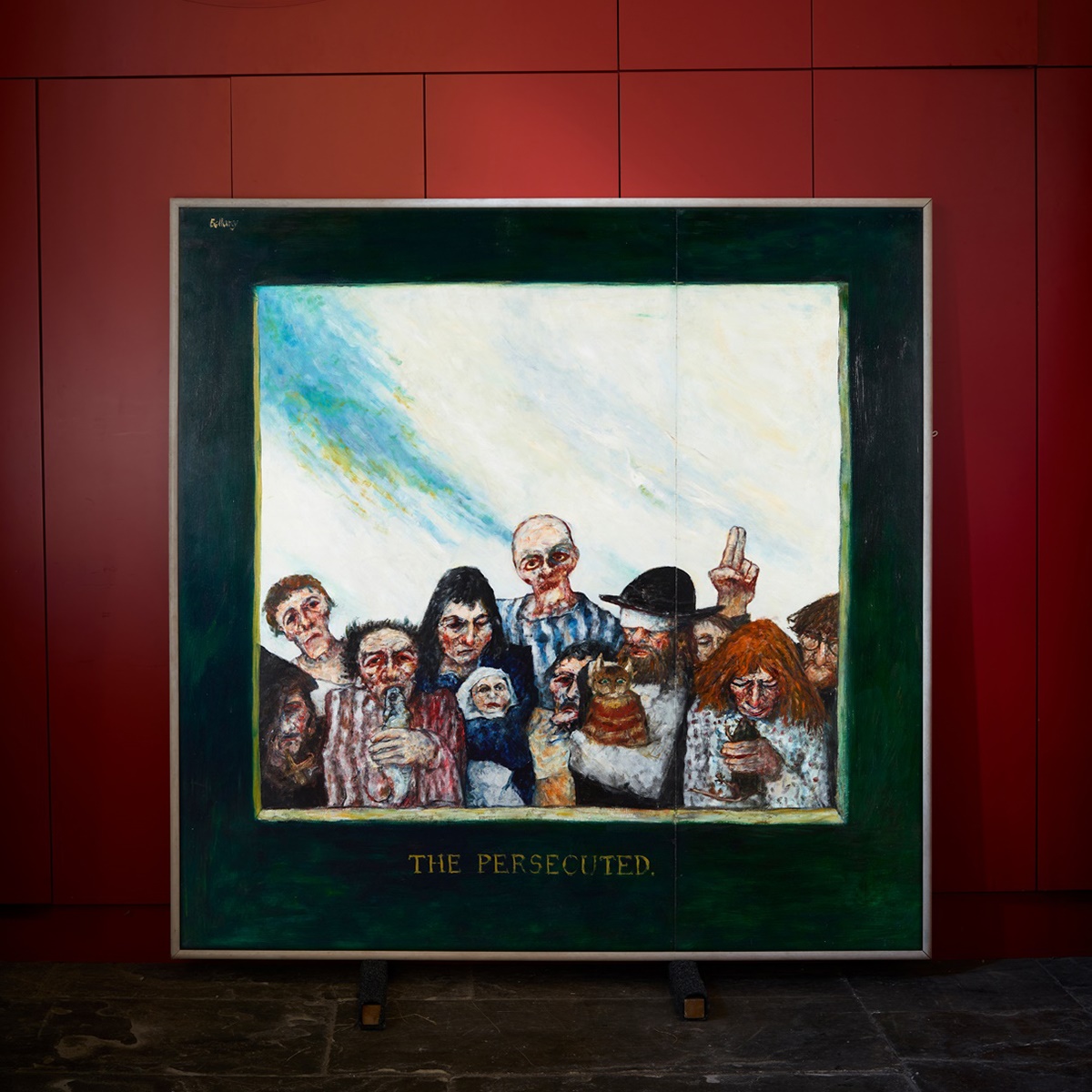 Large-scale John Bellany (1942-2013) paintings from the mid-1960s – the works that cemented his reputation as a contemporary artist of significance – are also scarce at auction. Signed, inscribed and dated 1968, the 185cm square oil on board The Persecuted was painted following a visit to the site of the Buchenwald concentration camp. As an image of suffering, it does not hold back, showing his emaciated subjects huddled together.

Exhibited at the Walker Art Gallery, Liverpool in 1969, its importance was recognised with a winning bid of £50,200*.

Our Scottish Paintings & Sculpture team are now working towards our next specialist auction on Thursday 08 June.