With Head of Fine Furniture & Works of Art Douglas Girton

Venice in 1500 was enjoying a golden age as one of the richest and most powerful trade and cultural centres in Europe, trading extensively with the Byzantine Empire, the Muslim world, and beyond. Its strategic position as the nexus of the lucrative trade routes to the East and Africa enabled it to secure a monopoly on rare and exotic goods and materials, and the city grew rich. Its overseas empire spanned across the Mediterranean, to include territories from Friuli all the way to Cyprus. The production of luxury goods flourished, as producers could source the best materials, and wealthy merchant and aristocratic clients fuelled demand.

The Venetian enamel wares represent a beautiful amalgamation of different influences and illustrate how well-connected Venice was in the Renaissance. They are generally of exceptional quality and have a very unique, easily distinguishable style. Many of the surviving examples were clearly for use in a religious context, however the present example with its central silver and green armorial indicates it must have been commissioned by an aristocratic family. 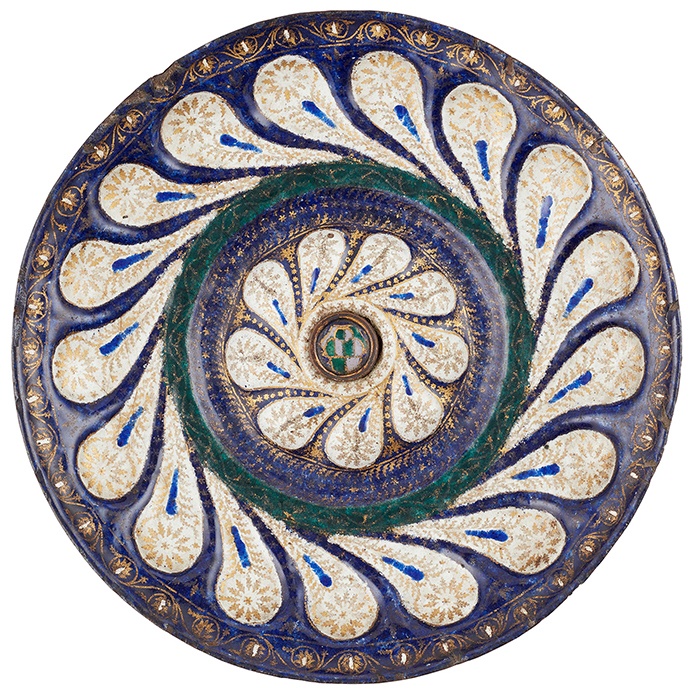 Italian nobility in the Renaissance used a variety of elaborate and precious vessels for formal dining, but the most splendid tableware was displayed on sideboards or credenze around the sides of the room as a show of wealth. The shapes with their raised gadrooning are inspired by silver and other metal wares, which also inspired glass produced in the same region. Another source of inspiration may be the famous deep blue Lajvardina ceramics produced in Persia. This would not be unlikely, as Venice had been a crossroads for trade between Africa, Asia and Europe since medieval times.

The technique is related to early Netherlandish examples. The objects were hammered from copper sheets, then fused with a thin layer of powdered glass using high heat with the main colours being cobalt blue, dark green, white and more rarely turquoise, red and black. The first layer of opaque white is the key to making the colours applied over it look luminous. Pieces were decorated with further enamels of different colours fixed with subsequent firings. Finally, patterns of gold foil were applied and fused to the enamel surface using lower, but still elevated, temperatures. These were applied to the surface of the enamel to create repeating patterns and were likely stamped with small tools used to apply fine metallic foil, called paillon, yielding a textured surface. Although the gold foil is very rubbed in most examples due to not having been fired, a few areas still show these original textures. Some of the stars on the present chargers still have their raised centres.

The uniform style and the relatively short period in which all of the known Venetian enamel wares were produced date them almost exclusively from the late 15th century to the mid-16th century. Although Venice was well renowned as a centre of glass it remains largely unrecognised as a major centre for the production of enamels. Surviving pieces like the present two lots are rare, with only a few hundred known in private collections and museums.