In this essay by Liberty Paterson, we are introduced to The Keir McGuinness Collection of African Textiles which achieved a 100% selling rate in our May 2021 auction of African & Oceanic Art, Antiquities and Natural History - looking at how African textiles have influenced the evolution of Modern & Contemporary Art.

The rich collection of African textiles offered in our May 2021 auction reflected the extensive aesthetic legacies that have permeated modern art and continue to influence contemporary art globally. The collection included textiles showcasing weaving and pattern styles from across Africa, with a strong focus on sub-Saharan and West African regions in particular. Early examples in the collection give a sense of the historical nature of the textile traditions represented, with pieces dating from the nineteenth century.

It has long been noted that Western modernism was heavily influenced by African artistic traditions. Comparisons have often focused on Cubism’s links with African sculptural and architectural aesthetics. The wide-ranging traditions of African textiles in this collection can offer further visual connections woven throughout modern and contemporary art history. In this sense, the textiles come to represent enduring aesthetic legacies that have informed some of the most renowned artists.

The varied aesthetics of African textiles continue to influence contemporary art globally. African American artist, Kehinde Wiley, draws on West African textile design in the patterned backdrops that encroach on his portraits of black sitters in an aristocratic style recalling Old Master paintings. British-Nigerian artist, Yinka Shonibare, uses the colonial legacy of Ankara fabric in his work to subvert Western art traditions and comment on globalisation and the construction of culture. Ghanaian sculptor El Anatsui creates intricate cloth-like sculptures using thousands of shards of recycled aluminium bottle caps, which give the effect of shimmering patterned textiles whilst simultaneously embodying Western commercial influence in Africa. The appeal of African textiles for contemporary artists seems to be linked to their cyclical role in global commercial trade, which can serve to reflect experiences of diaspora communities and disrupt the linear history of Western modernism.

There is another circular legacy at play, as a number of African abstract artists working in the mid-twentieth century have acknowledged being inspired by European modernism. For example, Sudanese artist, Ibrahim El-Salahi, admired artists like Cézanne who he encountered when studying at the Slade in London. As such, his artwork draws on a Western generation’s take on African artistic traditions that he then combines with Arabic calligraphic forms derived from his North African heritage. Shonibare is now exploring the art historical influence of African art further in an exhibition based on Picasso’s collection of African art this June.

raffia with stitched appliqué decoration, formed of nine panels, with profuse geometric designs on the left contrasted by more subtle forms on the right

The textile collection offered in our May 2021 auction included a number of pieces from the Kuba peoples of the Democratic Republic of Congo. The Kuba textile tradition has begun to be linked to Western modernism, including through the exhibition, Kuba Textiles: Geometry in Form, Space, and Time, held at the Neuberger Museum of Art, New York in 2015. The quirky geometries that characterise the raffia cloth designs of Kuba textiles, as seen in lot 187, a Kuba skirt from the early twentieth century, predate the comparable whimsical forms in the well-known abstract paintings of Picasso, Klimt and Matisse. The artists may well have first come across Kuba textiles at African art exhibitions in Paris during the late nineteenth century.

Henri Matisse went on to collect Kuba textiles in the last decade of his life and hung his collection on the walls of his studio alongside the similarly experimental patterns of the cut-out collage works he was creating in his final years. Matisse remarked on the endless inspiration the textiles offered him, commenting, ‘I never tire of looking at them for long periods of time, even the simplest of them, and waiting for something to come to me from the mystery of their instinctive geometry.’ Klimt’s golden period works, crowned by his monumental 1901 Beethoven Frieze, also draw on multiple elements distinctive to Kuba textiles. The works echo the combination of complex interlocking patterns alongside sparser panels in the designs of Kuba textiles and feature a similar palette of natural tones. It is not surprising to learn that Klimt was also a collector of Kuba textiles, further cementing that his visual language is rooted in this central African aesthetic.

Beyond the examples of Kuba textiles, the collection featured numerous pieces from the Ewe peoples of coastal Togo and eastern Ghana, where the stripweaving technique has been perfected. Ewe designs like lot 210, an early twentieth century Ewe kente cloth, offer complex patterns with colour and form expertly balanced to create enveloping compositions. The visual language feels familiar and can begin to recall the vivid abstract geometries of Western artists Paul Klee and Hans Hofmann. Both Klee and Hofmann were influenced by Cubism and the colour palettes of artists like Robert Delaunay and Matisse. In making these links to Western modernism the artists were in turn heavily indebted to the visual languages of African art and textiles, given that they had informed these avant-garde European movements so strongly.

Klee felt his sense of colour and focus on abstraction had been transformed through a visit to Tunisia in 1914. He went on to create paintings characterised by rectangular blocks patterned in complimentary and dissonant colours which strongly invoke the West African Ewe textile designs. Works like Ancient Harmony from 1925 suggests in its title that its aesthetic rhythm is linked to prior traditions, and the crossover with the colours and forms of Ewe stripweave is striking. Hofmann became seen as a pioneer of Abstract Expressionism, but his works retained a sense of pictorial structure that also bear strong visual parallels to the geometric designs of Ewe textiles. The vibrant overlapping rectangles of his 1958 work Morning Mist, can in this sense be viewed as an expressive visual legacy connected to the colourful stripweave patterns developed by the Ewe peoples. Hofmann’s role as teacher to many American Abstract Expressionist artists meant his visual language would be built upon by a later generation of Western artists further distanced from its aesthetic parallels with African textile patterns.

Seeing the collection of textiles together shows the continuation of these seminal and enduring visual traditions over time and across different African regions. From the bolder colourful patterns to the subtler, intricate weaves of the more natural toned styles, the collection shows the ways in which African textile practice foregrounds various modes of artistic abstraction. Each textile offers a unique material link to modern aesthetics rooted in African design, with a continued legacy in contemporary art today.

Highlights from the Collection

strip woven cotton, formed of twenty strips, navy blocks on an cool yellow ground, the central strip unadorned and signed, the design becoming irregular on the opposing side, weft float motifs throughout

cotton, in weft faced style with a chequerboard pattern of pink, white, navy and yellow, adorned with weft-float combs within

dyed cotton, with rows of light blue circles on a navy ground 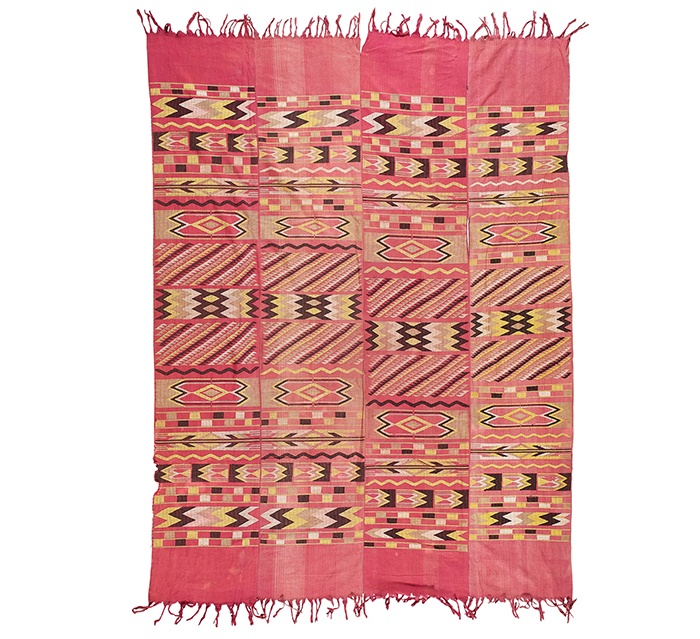 The UK was traditionally a centre for the sale of Tribal Art from Africa and Oceania. With our international reach, gallery spaces in Edinburgh, London and Glasgow, Lyon & Turnbull is ideally placed to play a strong role in the continued strengthening of the UK as a market. As a county whose people had travelled and spread across the world over the past 200 years, the United Kingdom can yield valuable souvenirs of its well travelled past. Over the past few years, pieces have emerged on these shores that have caught the attention of the top end of the market.