To Have and to Hold

Celebrity and Royal engagements have always been big news and with two announcements from the British Royal family in as many months Jewellery specialist, Ruth Davis, thought it would be a good time to look at the subject on everyone's lips - the ring.

According to the history books, the first diamond engagement ring ever presented was given by Archduke Maximillian of Austria, to his betrothed Mary of Burgundy in 1477. However, the nobility of Europe has a long history of gifting jewellery to their intended, so there is a lot of speculation as to if this was a deliberate effort to start a ‘trend’; the Archduke was probably just as likely to have given her a necklace or a brooch. Over the centuries that followed hundreds if not thousands of rings, of one form or another, were presented as tokens of love and symbols of the beginning of an enduring relationship. Though it may be surprising, it was not until relatively recently, that this became one of the most important parts of the engagment ritual.

During the mid-19th century, the British diamond minor Cecil Rhodes discovered the now world-famous diamond mines in South Africa, just at the crucial time when production from the Brazilian mines (until this point the most important source in the world) was starting to slow down. With increase in availability often comes a decline in value, however when Rhodes founded De Beers in the 1880s, he made sure that this most precious of products was marketed carefully. In 1947, copywriter Frances Gerety was asked to come up with a slogan for De Beers’ next marketing campaign, and she rushed off the line ‘A Diamond is Forever’ without giving it too much thought; the now world-famous slogan launched the marketing campaign which began an irreplaceable tradition for engagement rings.

Be inspired by some of the most famous engagement rings (illustrated by more accessible options from past jewellery auctions).

In 1840, three years after ascending to the throne, the 21-year-old Queen Victoria married Prince Albert of Saxe-Coburg and Gotha; it is one of Britain’s most famous love stories. Before their marriage, Prince Albert presented the young Queen with a gold ring, modelled as a coiled snake, and set with an emerald. We might think this is an odd choice today, but when we consider that the coiled serpent is a symbol of eternal love, and that the emerald was Victoria’s birthstone, it becomes easy to see the thought and consideration Albert took when picking that particular design. Over the years, Albert was known to personally design the jewellery he gifted to Victoria, proving that these tokens of his love had great personal significance.

From one queen to another, Queen Elizabeth II’s single stone diamond ring is arguably one of the most classic designs on the list. Featuring a 3.00ct round cut diamond, with small diamond set shoulders on a platinum band, it might not be the most impressive piece of jewellery in her collection, but it is her most personal. Knowing that he needed to find a ring fit for a Queen, Prince Philip turned to his mother Princess Alice of Battenberg for help; to remedy the problem she gave him a diamond and aquamarine set tiara, originally from the Romanov collection, which had been given to her on her wedding day, Prince Philip then had the piece remodelled, using some of the stones to make the engagement ring, which he presented to Elizabeth in 1947.

Jackie Kennedy is one of the icons of the 20th century, always ahead of the curve in terms of fashion, she proved that an engagement is does not always have to be conventional. Given to her in 1953 by JFK and created by the famous French jeweller Van Cleef & Arpels, the twist ring featured a 2.88ct rectangular step cut diamond and 2.84ct similarly shaped emerald, with baguette, marquise and round brilliant cut diamond detail, it was a floral extravaganza fit for the first lady, exuding style and individuality. JFK presented the 24-year-old Jackie with the ring in Parkers Restaurant, Boston. That proposal made the restaurant’s table 40 famous, but not as famous as the most iconic, if tragic, of modern love stories.

Although technically her wedding ring, the baguette cut diamond eternity ring Joe DiMaggio gave Marilyn Monroe on their wedding day in January 1954 is definitely worth a mention. It is a classic design, that screams elegance, and certainly looked the part on the 28-year-old screen sirens finger. Although the marriage didn’t last the year, the iconic look of the ring and her enduring impact on popular culture have stood the test of time. 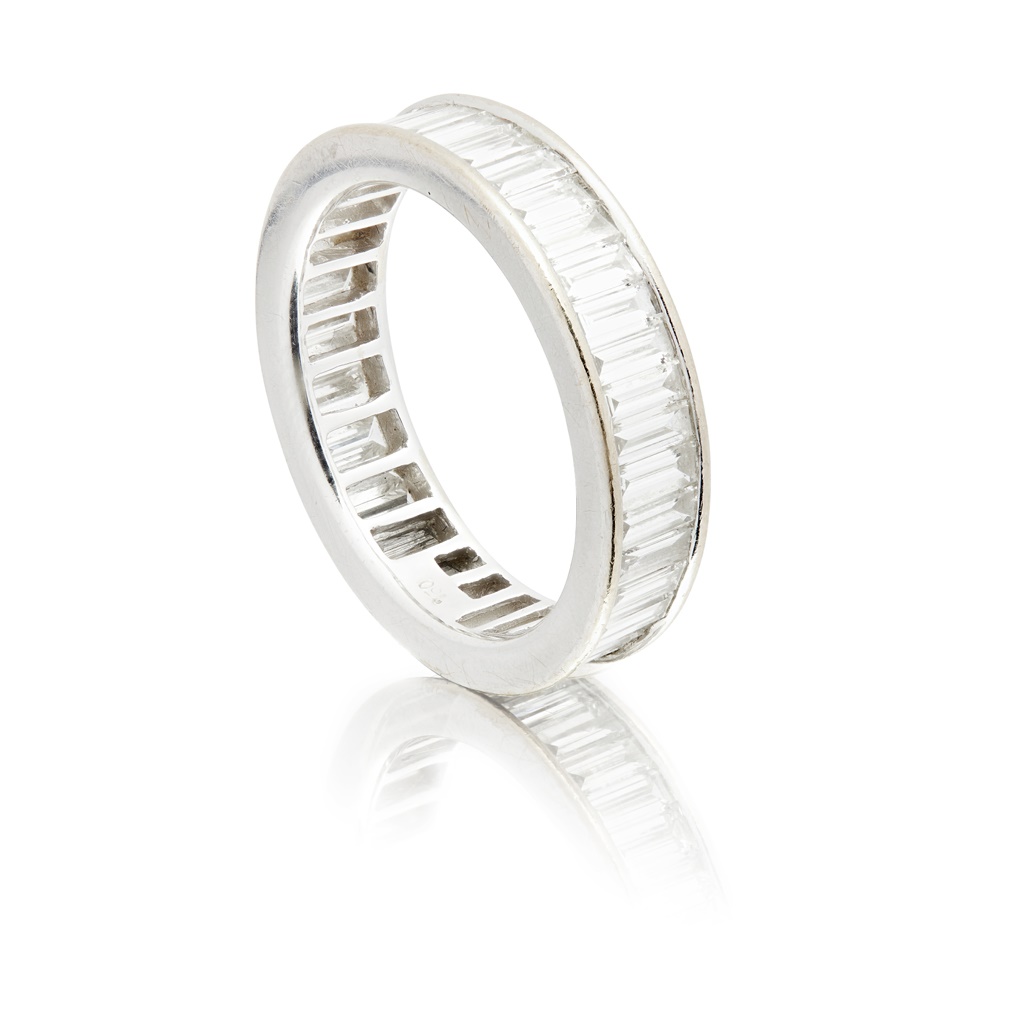 Married eight times, Elizabeth Taylor certainly wasn’t a lady short of diamonds, and as this suggests she certainly wasn’t one for convention; her fourth husband, Eddie Fisher, proposed to her with a diamond bracelet, not a ring, and this set a trend. After Fisher, she met the greatest love of her life, Richard Burton, so good she had to marry him twice. The first time he proposed with an emerald and diamond set Bulgari necklace before marrying in Montreal in 1964, and the second time with more emeralds, this time with a suite of jewellery previously from the collection of The Grand Duchess Vladimir of Russia. If nothing else, Taylor proved that sometimes it’s worth breaking with tradition.

In June 1966 Frank Sinatra presented Mia Farrow with a 9.00ct pear shaped diamond ring, Sinatra was 50 and Mia was 21. Perhaps a more conventional ring, but the proposal was certainly anything but conventional, Sinatra presented it to her in a cake box in during a transcontinental flight. Then, it cost $85,000 dollars, quite a sum by any standards, though at the time many thought he was trying to distract himself from his failed relationship with Ava Gardener, the pair remain one of the most iconic couples of old Hollywood.

Arguably the most iconic engagement ring of all time, Princes Charles proposed to Lady Diana Spencer with a sapphire and diamond cluster ring, in February of 1981. The 12.00ct Ceylon sapphire is surrounded by 14 solitaire diamonds was made by the royal jeweller Garrard’s, and was one of a selection sent to Diana so that she could pick her own ring. Though the Prince and Princess of Wales' marriage came to an end in 1996, that wasn’t the end of the love story for this diamond ring. Their son, Prince William famously proposed to Kate Middleton in 2010 using the same ring, allowing it to take on an iconic status for yet another generation.

The most recent in our string of jewellery love stories is that of Prince Harry and his fiancé Megan Markle, when Harry proposed to Megan at the end of 2017 he did so with a very personal spin on a rather traditional design. The three-stone diamond ring he designed included a central cushion cut diamond from Botswana, where the couple have spent time together; the secondary diamonds are from his late mother’s jewellery collection; and was made by court jewellers Cleave & Co.

Take the first step to selling your jewellery and silver at auction with a free, no-obligation, sales valuation from our specialists.

With dedicated Jewellery, Silver & Watches auctions in both Edinburgh and London our specialist service will get you the outstanding result you need.

To arrange an appointment, or to find out more about selling at auction, please contact specialist Ruth Davis.