Terry Frost’s joyous and life-affirming art had its roots, somewhat surprisingly, in his experience as a prisoner of war during World War Two. It had its finale in a triumphant display of new work at Tate St Ives, after a career spanning some six decades. We were delighted to present a fine group of works by Frost in our October 2021 Modern Made auction that took place at the Mall Galleries.

Born in Leamington Spa in 1915, Frost was encouraged to paint by his fellow inmate at Stalag 383, the artist Adrian Heath. It was on Heath’s suggestion that he moved to St Ives in 1946, before studying at Camberwell School of Art in London. On his full-time return to Cornwall in 1950, Frost received early career support from the ‘first generation’ of the modern St Ives School; Ben Nicholson helped to secure a Porthmeor Studio for him, whilst Barbara Hepworth employed him as an assistant. During the 1950s Frost emerged as a leading member of the St Ives ‘middle generation’ of artists, alongside Wilhelmina Barns-Graham, Peter Lanyon and his particular friend Roger Hilton, amongst others.

A champion of art’s restorative power, Frost attempted to capture what he described as ‘moments of truth’. This sublimity was often experienced in nature, from observing boats in St Ives harbour to walking through snow in the Yorkshire Dales. In 1991 he recalled Lanyon helping him to understand the Cornish landscape, explaining ‘Peter would drive me all over the place, along the coast and up on the moors…he taught me to experience landscape…you walked over the hills and the high grounds so that you knew what was above and below you and what was above and below the forms you were going to draw and all the while you’re feeling those forms all through.’ This understanding was expressed through a vocabulary of forms and symbols and a bold palette which Frost made his own. Circles brought alive as spirals, semi-circles stretching towards edges and chevrons piercing space were given direction and character through the use of red, black, yellow and other high-keyed colours, combined with space-manipulating white.

An openness to American Abstract Expressionism and recent developments in French painting, including those of the Paris-based Pierre Soulages and Sam Francis, stimulated Frost’s technique in the late 1950s, as he revelled in the physicality and application of his materials. His reputation grew hand-in-hand with that of the ‘St Ives School’ at large and in 1960 he received his first solo show in New York, at the Bertha Schaeffer Gallery. Developments in his work during the 1960s and 1970s could be seen in regular exhibitions mounted by Waddington Galleries in London. In 1989, Frost described this period as ‘one of total confidence…any mark I made seemed to be fine.’ A formal and technical simplicity grew more present in his work. Structural discipline combined with rhythm, tonal warmth and discord and a dynamic rather than literal use of form came to the fore. The ability of acrylic paint to be thinned whilst maintaining its intense colour was deployed with vigour. 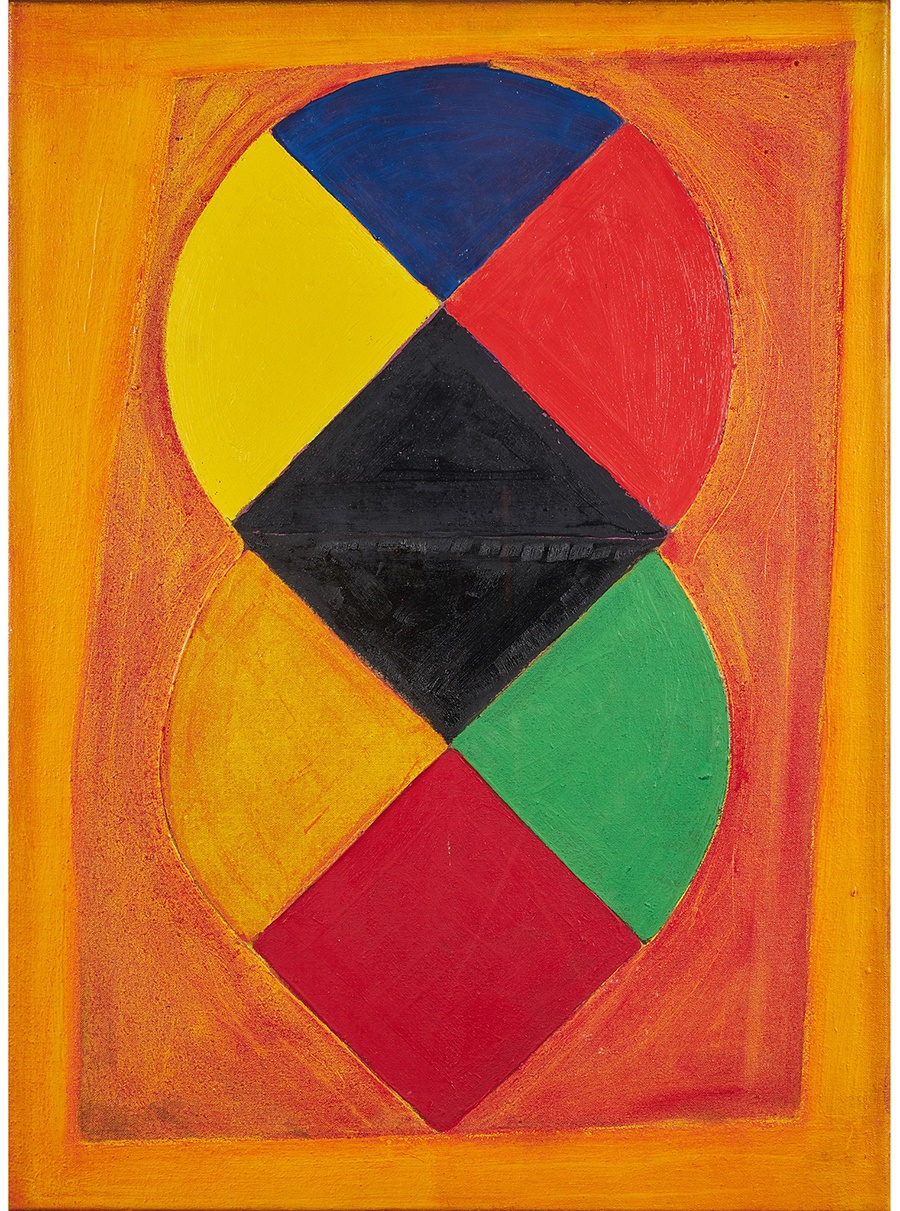 Teaching posts, including those at the universities of Leeds and Reading, saw Frost live beyond Cornwall for extended periods of time. However, on his retirement in 1974, Frost settled in Newlyn where he lived for the rest of his life. As a link to post-war St Ives and as a highly-successful professional in his own right, Frost was a role model for a younger generation of artists associated with the area, including Trevor Bell and Karl Weschke.

Frost emerged as a celebrated printmaker during the 1980s and 1990s, particularly for his exuberant screenprints. A reconnection with the Cornish landscape and trips to the Mediterranean reinvigorated his work and he was elected to the Royal Academy of Arts in London in 1998. Frost’s cross-generation validity was embodied in Tate St Ives’s Painting not Painting exhibition of 2003. A significant body of work was shown in the context of that of younger British artists, such as Jim Lambie, Victoria Morton and Julie Roberts. At the heart of Frost’s presentation was the jubilant Installation: Contrast in Red, Black and White, a room installation featuring multiple paintings and painted hardboard cubes. This was to be Frost’s swansong, as he died seven months later.

As a pioneer of British abstraction and a leading figure in the St Ives School, Frost’s legacy as an artist and teacher is significant. The work he made during a long, prolific and committed career is characterised by a joie de vivre which brings pleasure to many. At the same time it was founded on a serious exploration of universal principles of existence, which gives his work a lasting importance. As seen in Painting not Painting, the work produced by artists associated with St Ives in the second half of the twentieth-century continues to resonant with the artists of today.