The Story of a Watch

Head of Watches, Sarah Fergusson tells us the story behind Lot 176 in our March auction of Jewellery, Watches & Silver, the Longines gold automatic watch which once belonged to James Norman Fraser - diving into the history of the piece and discussing the importance of provenance.

It is certain that, when considering objects, especially old ones, that we often say, “if only it could talk.”  When we consider the story of an object, we look to define it by what is called 'provenance'. This term is popular within the auction world, and relates to the sometimes quite dry history of an object. That is not to say this very particular type of history is not important – it most certainly is – it can often just be a little linear and factual. Provenance, as we consider it, is more than its definition, which merely states it to be the origin of an object. Provenance at auction is usually the history of an object’s ownership. For a painting it may also be a list of exhibitions in which it featured, auctions at which it was sold and so on. This information is extremely helpful in giving items a sense of place within history. The dryness however comes from the lack of a very human element – we might know who owned a ring for example but we cannot immerse ourselves in its story if we do not know anything of the purpose for which it was given, or the occasions that it was witness to.

When we can, it is more enjoyable and easy to relate to an object if we have knowledge of the role that it has played in the life of its owner. We definitely feel we understand an item better through hearing about events at which it was present. This idea is an old one, with philosophers including Heidegger extrapolating the idea of understanding objects in the world through the ways in which we interact with them.

Watches lend themselves very nicely to this idea for as well as being present at many events, often they have actually played a key facilitating role. The 1950s was an important decade for many reasons and from the perspective of a watch specialist, the world of watches would have been far less exciting without it. It was during the 1950s that we saw the genesis of many of the sports or tool watches that are so popular today (both the originals and the latest models) which were used by owners to time car races and diving trips for example. In addition, this was a wonderful era for the dress watch. In the watches auction on 9th March 2021, there is a gentleman’s Longines wrist watch. It is a good-looking watch, made from gold and with a great movement inside. Beyond that, having only the watch, we would have been saying if only it could talk… This watch however, does come with some interesting accompaniments, extras that allow the watch to speak to us and narrate some very interesting personal, and national, history.

Longines, a longstanding watch company, has a strong reputation and is credited with the usual accolades that one would expect from a Swiss manufacturer. From design to movements to innovations, the company with its winged logo is one of the best known historical brands still operating today. It makes sense therefore that the Scottish publishers DC Thomson chose a Longines to gift to one of their long-serving employees in the mid-1950s. Thomson was originally a family-owned shipping firm founded in the mid-19th century. Towards the end of the century, they diversified into publishing, purchasing the Dundee Courier in 1886 and merging with another firm, creating DC Thomson in 1905. With several offices and works in the UK, the company flourished throughout the 20th century and is still operating today. Publications such including The Sunday Post, The Dandy and The Beano are all DC Thomson productions.

James Norman Fraser was born towards the end of the 19th century, in Glasgow. In 1904 at around age 15, he started work at DC Thomson in their Glasgow branch. Around ten years later, he moved with his wife, and her daughter, to the Manchester offices to work in their Press Room. He was a loyal and successful employee, soon being promoted to Press Room Overseer. He and his wife had a son and daughter while in Manchester and they stayed there for around thirty years in total. It was not until 1948 that James returned to Scotland when he took on the role of Chief Printer at the Dundee headquarters. It was there, in 1954, that the company acknowledged his 50 years service with the company and awarded him the gold Longines watch. James did not actually ever retire from DC Thomson, rather he passed away in 1960 while still in employment there. It is satisfying to note that his son, who inherited the watch, followed in his father’s footsteps and worked for DC Thomson. He was also a great success there and became Chief Printer, this time in Glasgow. 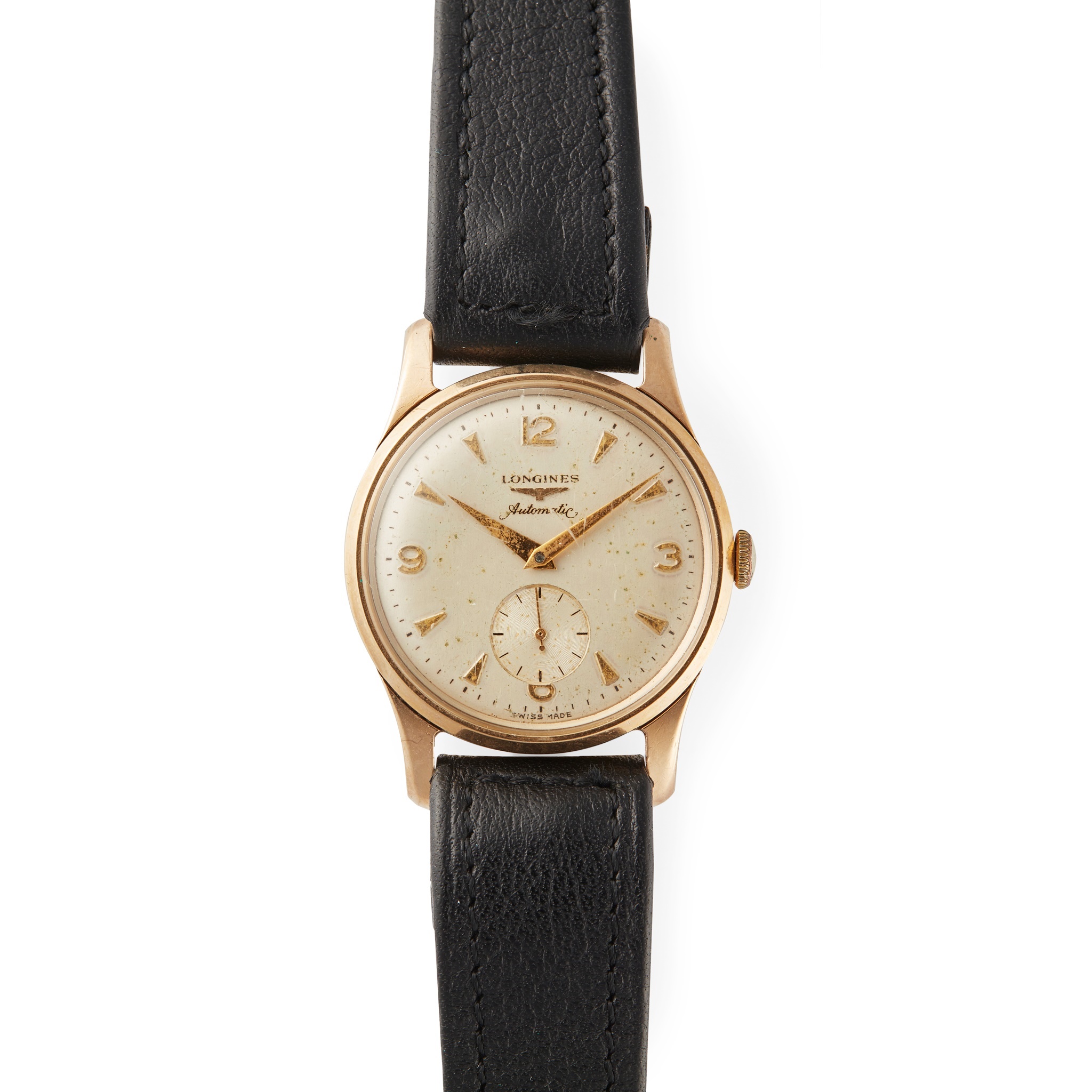 So how have we come to know this information about the watch? Well the watch came to L&T via James’ granddaughters, along with the associated DC Thomson booklet and oral history of his career. The gem in this is of course the inscription to the caseback though. If we lacked the story from James’ descendants, we would still have been able to research the story of the presentation of the watch by contacting DC Thomson or consulting archival information. Sadly most watches do not have inscriptions however and often arrive for sale alone, without documentation or history. While we cannot learn much beyond the history of just the production of those watches, we can look to our own collections and how we can keep them connected to their stories.

So if you have a watch or two, keep the boxes, papers and receipts. Take photographs of it on your wrist and note down the special occasions on which you wore it. Did it help you make an important date? Did you wear it on your wedding day? Or was it running slow and made you late for something important?! From anecdotes to historical events, these stories make a watch for the next generation of owners. They aren’t all looking for pristine, unworn timepieces. Dive watch connoisseurs want watches that have seen the sea, been bashed around and come with the dive logs and photographs of the owner in their wet suit.

If only they could talk… They don’t need to, we are here to do it for them.

The Longines gold automatic wrist watch owned by James Norman Fraser features at lot 176 in the auction on 9th March 2021.

Discover More about your Watches

Lyon & Turnbull’s watch auction and valuations department is a dynamic one with significant expertise, creating diverse watch auctions in the UK with fine, rare, modern and vintage timepieces. In line with the growth of the pre-owned watch market in recent years, we hold six specialist auctions each year, across our Edinburgh and London salerooms. These frequent auctions feature examples from renowned watchmakers including Rolex, Cartier, Patek Philippe and Audemars Piguet. Highlights from recent years include an IWC Le Grand Complication wristwatch that sold for £63,650 and a rare Rolex GMT Master in 18ct gold that achieved £41,250.

Currently, watches are sold at our prestigious Edinburgh saleroom within our Jewellery, Watches & Silver auctions and in London within our Select Jewellery & Watches auctions. These two focused categories allow us to place your timepieces into the auction context that will be the most profitable for you as a vendor.