The Pondicherry Carpet from Penicuik House

This February, we are delighted to present a ‘Indo-French’ style Pondicherry Carpet from Penicuik House, decorated in a floral pineapple and grape 'chintz' pattern, to auction in our forthcoming Five Centuries sale.

Little has been written on the history of the carpet industry of Southeast India beyond noting that it is the oldest centre of carpet weaving in India, with weavers arriving from Persia some time before 1550. Also mentioned is that some of the better carpets on the subcontinent were woven here prior to the late 19th century. Of Ellore, a little further up the coast from Pondicherry, Walter Hawley writes: “here in former times were produced some of the best rugs in Southern India; and even as late as 1883, Mr. E. B. Havell wrote that he had seen pieces woven to meet special orders which were equal in point of interest and material to the old specimens in the hands of connoisseurs.” (Hawley, Walter. Oriental Rugs, New York 1913, p260)

Murray Eiland Jr. comments on Indian carpets that: “in the nineteenth century there were a number of carpet centres that are not significant producers now…it is difficult, if not impossible, to identify them with specific carpets” (Eiland, Murray. Oriental Rugs, London 1998, p295-296). It is wonderful therefore to have the family provenance in this instance, which indicates that this example was produced in Pondicherry in the mid-19th century.

On Pondicherry carpets, Jack Franses notes that: “the French bought Pondicherri [sic] in 1702...and a small workshop, which produced the most delightful Indo-French designs in the latter part of the eighteenth century and all the nineteenth century, which are much sought after today.” (Franses, Jack. European and Oriental Rugs, London 1970, p82-83). That ‘Indo-French’ style can be seen very much in evidence in this example, with its cross-cultural chintz field design and European rococo cartouche border.

Western interest in Indian carpets was aroused by the impressive examples on display at the Great Exhibition of 1851. They drew considerable admiration from the viewing public, which led to their increased popularity and production from the 1850s onwards. The choice of an Indian carpet would thus have been the height of fashion for the grandest room in the newly remodelled Penicuik House in the mid-19th century.

By family repute, this carpet was commissioned or purchased in Pondicherry and brought back from India by Edward Clerk (1824-1917) who was serving with the 4th Madras Cavalry, latterly becoming a major. He was a younger son of The Right Honourable Sir George Clerk, 6th Baronet of Penicuik (1787-1867), and bought the carpet as a gift for his father. Sir George had extended Penicuik House in 1857, with two large wings added by the eminent Victorian architect David Bryce, and would have been refurbishing the interiors thereafter. It is presumed that this carpet was in situ at the house sometime between 1857 and Sir George’s death in 1867. It was certainly given pride of place by the time Carelli painted this watercolour of the grand interior of Ossian’s Hall in 1878, showing it on the floor. 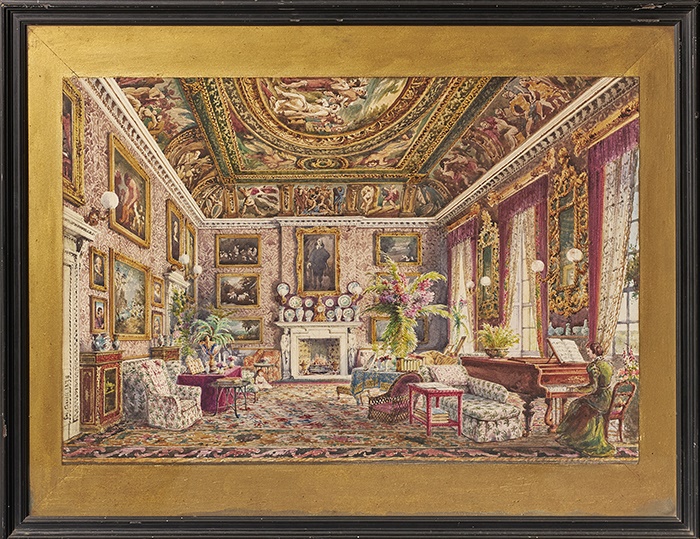 (Illustrative purposes only. Not included in sale.)

Penicuik House had been built in the 1760s by Sir James Clerk, 3rd Baronet, and decorated in lavish style. The most impressive room was the grand saloon, known as Ossian’s Hall. Sir James had commissioned Scottish artist Alexander Runciman (1736-1785) to decorate the ceiling of this room with themes from the recently published Poems of Ossian (1765) by the Scottish poet James Macpherson.

Sadly, Penicuik House was destroyed by fire in 1899 and Runciman’s ceiling became one of Scotland’s greatest lost artworks. During the fire a great deal of effort was channelled into salvaging the furnishings and the majority, including this carpet, were saved and rehoused in the Clerks’ new home in the nearby converted stable block, spending the 20th century there.

By family tradition, there is thought to have been a second carpet, which may have ended up in an American museum collection subsequent to sales from Penicuik House in the late 19th century. At present we have been unable to discover any evidence as to its whereabouts. It may be that the additional section offered here came from that second carpet.

Lyon & Turnbull have developed a strong reputation for the sale of Rugs & Carpets, both through our Scottish auction house in Edinburgh and via live online auctions. Our specialists are knowledgeable, not only about rugs and carpets, but also the current marketplace, an essential combination that leads to successful sales of Oriental carpets and hand-woven textiles from regions such as Turkey, the Caucasus, Tabriz and across the Middle East and Asia.

Rugs and carpets are currently included in a range of auctions throughout the calendar, from dedicated sections in our antiques auctions to single-owner collections and house sales. To find out more about our upcoming auctions or to talk further about a potential consignments please do not hesitate to contact one of our specialist team.

The Centrality of Art

A Treasure from the Roaring Twenties