Long before the first diamond was cut and polished the pearl has been adorned as a symbol of beauty, wealth and purity. As early as 2300BC pearl jewellery was presented to Chinese royalty, worn to display the purity of the bearer. While in ancient Rome pearls were considered the ultimate status symbol - according to legend, Cleopatra crushed a pearl into a glass of wine to prove to Marc Antony that she could give the most expensive dinner in history. 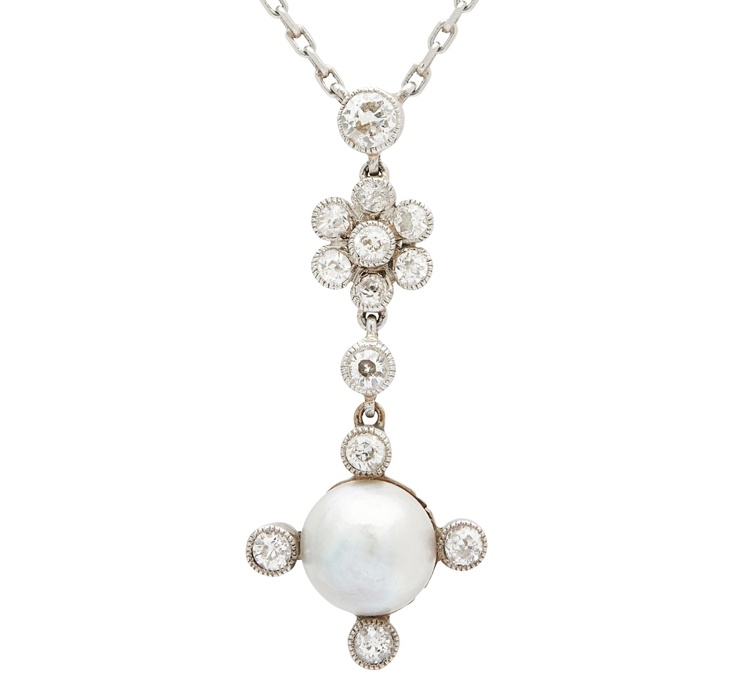 Desire for these natural wonders continued through the ages and, as a reliable commercial method of farming them had yet to be discovered, they commanded exceptionally high prices. It is said that Jacques Cartier bought the famed jewellery house’s landmark Fifth Avenue store in New York, in 1916, in exchange for two natural pearl necklaces.

A pearl is one of the few materials used in jewellery today which, like coral, is produced by a living organism rather than by geological forces deep in the earth. Pearls are produced by a type of mollusc – either a freshwater mussel or a saltwater oyster. When a small irritant gets inside the mollusc, they begin to secrete a crystalline substance called nacre which builds up in layers around the irritant, making it less, well, irritating to the mollusc. The longer it remains in there, the more layers build up and the larger the pearl gets.
There are, by and large, two type of pearls – natural pearls, in which case the irritant has entered the mollusc of its own accord in the wild, and cultured pearls, in which case that irritant was introduced by hand to encourage the growth of the pearl. The size, colour and shape of the pearl are dictated by the length of time it is allowed to grow, the geographical area in which it grows and draws nutrient from the water, and the shape of the mollusc itself.

LOT 97  A natural pearl and diamond set pendant brooch
modelled as a bow set with rose cut diamonds, suspending a pear shaped drop with foliate detail, set throughout with rose cut and small old round cut diamonds,
suspending a central baroque pearl, to a bar brooch with pendant fittings;
with accompanying report by The Gem & Pearl Laboratory | dated 28.03.17, numbered 14013, stating that the pearl is of natural saltwater variety | Overall length: 42mm | £1,200-1,800 + fees

The high costs of pearls derived from the extremely labour intensive method of discovery - diverse would have to dive up to 120 feet to collect them in baskets, and for every ton of molluscs hauled to the surface, there may be only 3 or 4 good pearls. However, by the end of the 19th century supplies were exhausted, indeed they were so over-fished that today it is extremely rare to find a natural example in today’s oceans.

A SPOT OF CULTURE

At the turn of the 20th century Mikimoto was the first to develop a method of culturing pearls on a large scale in Japan and the industry immediately took off, so much so that by 1935 there were 350 pearl farms in Japan, producing around ten million pearls annually. While this met the increasing demand, it unfortunately caused the price of natural pearls to drastically drop.

Today, most of the pearls you encounter in jewellery shop windows and auction rooms are cultured, however the demand for natural pearls has increased dramatically over recent years. In 2011, Christies sold the La Perigrina pearl, a late 16th century pearl reset by Cartier for Elizabeth Taylor for a staggering $12 million, and strands of natural saltwater pearls regularly exceed half a million pounds.

Scottish freshwater pearls were awarded protected status in 1998, and can no longer be fished from Scottish rivers. Although, the freshwater variety they are not quite as valuable as their saltwater cousins, they are certainly rich in character. Records show their use in jewellery back to the Roman period, with a Scottish freshwater taking a prime position in the Scottish Crown Jewels housed in Edinburgh Castle.

Date for Your Diary

Viewing in Edinburgh until the sale.