The York Place art school of Alexander Nasmyth (1748-1840) was a thriving hub in Edinburgh’s early nineteenth-century ‘cultural Renaissance’. Of the numerous aspiring artists Nasmyth tutored, it might be said that his most attentive students were his own children. This significant group of pictures by Alexander, Patrick, Anne and Charlotte exemplifies the distinctive style and precocious talent of the Nasmyth family.

‘At all events, we cannot help having a due regard for our forefathers. Our curiosity is stimulated by their immediate or indirect influence upon ourselves.’ - James Nasmyth, James Nasmyth Engineer: An Autobiography, John Murray, London, 1883

Alexander Nasmyth is best-known as ‘the founder of the Scottish landscape tradition’, but his earliest training was as a decorative painter. His talent earned him the attention of Allan Ramsay, a leading portrait artist and court painter to George III. Nasmyth spent four years training in Ramsay’s London studio, and directly afterwards he predominantly produced portraits for the nobility. Commissions waned when word spread about the young artist’s liberal politics, and a two-year period of study in Italy finalised Nasmyth’s move away from portraiture.

Upon his return to Edinburgh in 1784 Nasmyth established himself as an accomplished painter of landscapes. Architectural components recur throughout his compositions, reflecting Nasmyth’s abilities as an engineer and architect; accordingly, he often fulfilled commissions to design and expand the estates of the Scottish nobility.

In the 1790s Nasmyth designed 47 York Place, Edinburgh, for his family. The plan incorporated residential quarters in the top floor apartment and two garret storeys in the roof to accommodate teaching space and a studio. With the opportunity for European travel limited by the Napoleonic Wars, it was an astute time to establish a school of art. Aspiring artists enrolled to witness Nasmyth’s ‘familiar and practical’ lectures accompanied by demonstrations, with the household becoming a thriving hub in Edinburgh’s early nineteenth-century ‘cultural Renaissance’. Notable attendees included David Wilkie, Francis Grant, David Roberts, Clarkson Stansfield, William Allan, Andrew Geddes and the Rev. John Thomson of Duddingston. Nasmyth also taught middle-class women, for whom painting and drawing were important social graces. Tutelage was supported by Nasmyth’s daughters, who sometimes led sketching tours around familiar Edinburgh vistas including Duddingston Loch, Craigmillar Castle, Roslin, or the Forth estuary.

Raised in a uniquely artistic and intellectual environment, it is of little surprise that the Nasmyth children understood the principles of drawing and painting. It is remarkable, however, that so many possessed natural artistic talent. Of his eleven children at least eight were gifted artists: his six eldest daughters Jane, Barbara, Margaret, Elizabeth, Anne and Charlotte, and his eldest son Patrick and younger son James. James observed that ‘my father’s object was to render each and every one of his children…independent…accordingly, he sedulously kept up the attention of his daughters to fine art. He set on foot drawing classes…managed by his six daughters, superintended by himself.’

The Nasmyth children benefited from intimate access to their father’s paintings and expansive drawings portfolio, including many early copies of Old Masters made at the Trustees Academy in Edinburgh and Allan Ramsay’s studio. It also contained numerous landscape sketches observed from life, overwhelmingly portraying England and Scotland. Only a few European sketches survive, likely made during Nasmyth’s Italian studies, but charmingly these continental landscapes appear to have been pored over by the Nasmyth children, and can be seen to have inspired passages in their adult paintings. They all went on to paint landscapes almost exclusively, with each adopting a personal interpretation of their father’s style.

In 1810 Alexander visited London with his son Patrick (1787-1831) to view prominent private paintings collections. Patrick elected to remain in London, where he developed a detailed and precise painting style informed by seventeenth-century Dutch landscapes. Such was his commitment to the Dutch Masters, particularly Hobbema and Jacob van Ruisdael, that his obituary referred to him as ‘the English Hobbima’. Patrick continued to portray Scotland, which proved popular with London collectors. He was reported to have constructed a small portable painting tent which enabled him to work even in the most adverse weather conditions, so that he could capture a naturalistic and atmospheric impression of the landscape before him.

Signed and dated works by the Nasmyth daughters appear on the market infrequently, and Anne Gibson Nasmyth’s (1798-1874) paintings are particularly rare: she was less prolific than her sisters, with fewer than twenty works attributed to her. Nevertheless, she is recorded as having exhibited at the Royal Scottish Academy, Royal Society of British Artists, Royal Scottish Academy and British Institution, and her paintings reveal her to be a highly accomplished landscape artist with a predilection for stormy highland scenes. Anne joined her brother Patrick in London in 1829, where she and her sister Elizabeth established a further Nasmyth school of art at 9 Devonshire Street, Portland Place. 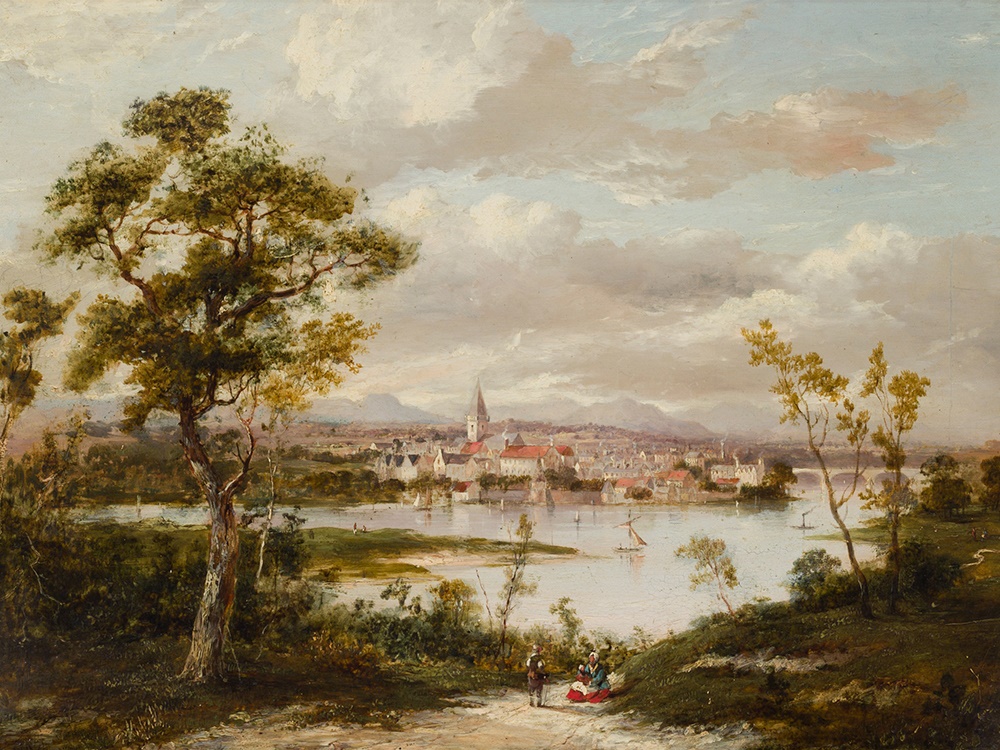 The youngest family member was Charlotte Nasmyth (1804-1884). Born and raised amidst the hubbub of York Place, she cultivated a painting style more distinct from that of her siblings on account of its freer, more flamboyant handling of paint and vibrant tonal palette. She was possibly the most prolific of her sisters, and appears to have travelled widely across the UK, with pictures recording landscapes across Scotland, Wales and England. Portraits of Charlotte were painted by William Nicholson (1781-1844) and Andrew Geddes (1783-1844), and are now in the collections of the National Galleries of Scotland and the British Museum respectively.