Renowned design historian Annette Carruthers introduces The Minoprio Collection, looking at the works of Anthony Minoprio and Edward Barnsley that featured in our January 2022 auction. Annette specialises in the Arts & Crafts Movement in Britain.

John Minoprio grew up surrounded by superbly made furniture, designed initially by his father Anthony (1900-1988) and later by Edward Barnsley (1900-1987), and he himself enjoyed a long, friendly and productive relationship with Barnsley and the craftsmen in his workshop at Froxfield in Hampshire. After Barnsley’s death, John Minoprio continued to commission new work from Jon Barnsley and James Ryan at the Edward Barnsley Workshop and from Adam Gamble, a former Barnsley apprentice who established his own business in Manchester. He also collected earlier pieces by Barnsley, Hugh Birkett, Stanley Davies, Oliver Morel and Peter Waals, all made of beautiful woods with consummate skill. This collection therefore contains examples by some of the finest cabinetmakers of the past hundred years.

As an ambitious young architect setting up home and business in the late 1920s, Anthony Minoprio had definite ideas of his own about furniture design, though it was not a subject taught at the Liverpool School of Architecture, where he trained under Professor (later Sir) Charles Reilly before winning the Henry Jarvis Studentship at The British School at Rome. Because of family connections at Avening in Gloucestershire, close to Sapperton where Gimson and the Barnsleys had developed their distinctive style of Arts & Crafts furniture, he first approached Sidney Barnsley’s son Edward to execute some pieces for him but he, perhaps intimidated by Minoprio’s overwhelming confidence and sensing difficulties ahead, declined the work, which went instead to Peter Waals (1870- 1937). After the death in 1919 of Ernest Gimson, whose foreman he had been for many years, Waals established his own workshop in Chalford, Gloucestershire, employing most of Gimson’s cabinetmakers and continuing to train local boys (fig. 1). Minoprio’s commissions must have been important to him during the Depression when he and many other artists and craftspeople struggled to survive in business. Their collaboration produced a group of pieces with familiar ‘Cotswold’ features such as revealed construction, contrasting inlaid lines and carefully chosen solid English timbers, combined with elements distinctively of their time, including scalloped and reeded edges, curvaceous frames and robustly faceted legs and feet. Occasionally idiosyncratic in design, they were an interesting experiment that deserves further research. One particularly fine piece includes carvings by Minoprio’s friend John Skeaping (lot 5), whom he had met as a fellow scholar in Rome in the mid-1920s and who created a portrait bust of him that remains in the family (fig. 2).

Minoprio’s architectural practice, in partnership with his old school friend Hugh Spencely who also designed furniture, grew steadily. They undertook a range of domestic, institutional and commercial projects and after the Second World War specialised in town planning and city redevelopment in England and abroad. In 1952 Minoprio approached Edward Barnsley (fig. 3) again and this time established a link that not only produced some exceptionally fine furniture but also impressed his son John so much that he in time became a more avid client than his father. Letters to Barnsley show that Anthony Minoprio no longer created the designs himself but always had clear ideas of what he wanted in terms of practical features and was decisive in choosing between proposals for form or decoration. The first commission, a boot and shoe cupboard (lot 10), was followed in 1964-5 by a walnut bureau for Anthony’s wife Catherine (lot 13), fitted with secret drawers that Barnsley challenged Minoprio to find within ten minutes. It took him and his sons ‘a good half hour’, and Minoprio was happy to pay more than originally quoted for the piece since the hidden compartments had proved complex to make. Barnsley’s apologetic requests for raised prices became a regular theme of their correspondence, but Minoprio wrote in 1971 ‘Of course £30 is agreeable – I know you never overcharge me! Cheque enclosed’ and in the following year, ‘How nice it is to be working with you once again on planning another Barnsley piece!’ Of the 1973 pedestal desk (lot 11) he wrote, ‘I would like this piece to be “top-class Barnsley” using the materials and construction which you feel to be right, so that the job is perfect of its kind’, and on completion he sent letters of appreciation not only to Barnsley but to the maker, Oskar Dawson.

John Minoprio thought the shoe cupboard was marvellous and he was astonished by the brilliance of the ebony and sycamore inlay, so when he was left a legacy by his godfather in 1966 he spent it at the Barnsley workshop on three pieces of furniture – another shoe cupboard (lot 37), a drinks and records cabinet (lot 26), and a display cabinet, for which he soon afterwards commissioned another, to make a pair (lot 28). Between 1966 and 1983 he ordered numerous special items for his home and business and also bought from Barnsley’s workshop stock when visiting Froxfield. Like his father and other regular clients, he developed a close friendship with Barnsley, who would stay with him in Cheshire on his way to the Lake District for walking holidays, on one occasion bringing a mock-up of an elliptical table to try out in the dining room. This proved to be impractical and was altered as a result, but all the finished furniture was robust enough for family life and a pleasure to use, as Barnsley hoped it would be. For John Minoprio, working with him and his fine cabinetmakers, Oskar Dawson, George Taylor, Bert Upton, Chris Butler and others, has been important in his life. 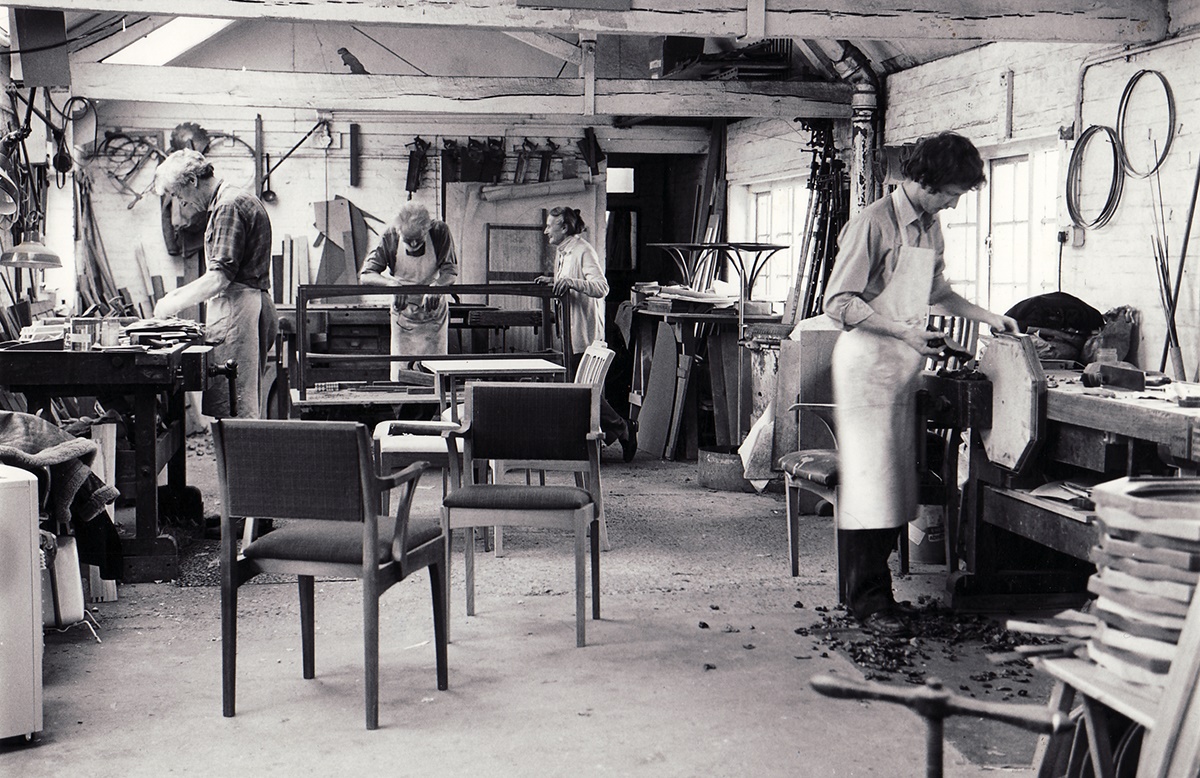 Pieces made for Minoprio’s office at Training Films International in 1981-2 were the last designed by Edward Barnsley himself. For some years he had been planning for the future of the workshop as an educational trust, which was established officially in 1980 and continues to the present day (see www.barnsley-furniture.co.uk) (fig. 4). Minoprio had advised on fundraising for the trust and he carried on buying Barnsley Workshop pieces, but he also now found himself attracted to earlier work by Waals and Barnsley, and by Birkett, Morel and Davies, which he enjoyed finding at specialist Arts & Crafts dealers in Burford and London. The collection therefore includes significant pieces from the 1920s and 1930s, but its special interest lies in the post-war commissions of a father and son who delighted in the collaborative process of working with a designer whose roots were in the Arts & Crafts but who was keen to create new work in a lighter style suited to modern life.

In 1971 Edward Barnsley was amused at being described as ‘the grand old man of Designer Craftsmen’. Often self-deprecating in letters and modest about his own role, he nevertheless held to the view that ‘a happy design and a well made job plays a fairly high ranking part in human affairs. And an even greater, far greater importance lies in the actual making.’ Such making was only possible because of the dedication of the designer and cabinetmakers and the support of their loyal clients. It resulted in works with a quality that Barnsley was fond of describing in the words of D. H. Lawrence: ‘Things men have made with wakened hands, and put soft life into are awake through years with transferred touch, and go on glowing for long years.’