The Komai Company of Kyoto

Designed in the form of a traditional Japanese timber building, Lot 289, this fine inlaid iron cabinet by the Komai Company of Kyoto features a removable yosemune hipped roof and is raised on a platform base supported on six soseki foundation stones. Dating to the Meiji Period, the piece is finely decorated with the roof displaying phoenixes and dragons and the four walls adorned with various houses in landscape settings with Mount Fuji in the far distance. It comes from a private Scottish collection in Perthshire.

The Meiji period (1868-1912) brought many cultural changes to Japan after the country opened its doors to the West. What most critically impacted the arts, was the new ruling outlawing the carrying of swords by samurai, the 1876 Haitou-rei (廃刀令). Leading to swordsmiths and sword furniture artisans ,such as the Komai family, evolving their practices to produce more in-demand pieces.

Historically, the Komai family were sword furniture makers in Kyoto for generations. The Komai Company is thought to have been founded in 1841 by Komai Seibei in Kyoto. Under the leadership of his son Komai Otojiro, the company became renowned for producing works displaying the textured inlay in gold and silver technique known as "Nunome-zougan 布目象嵌". 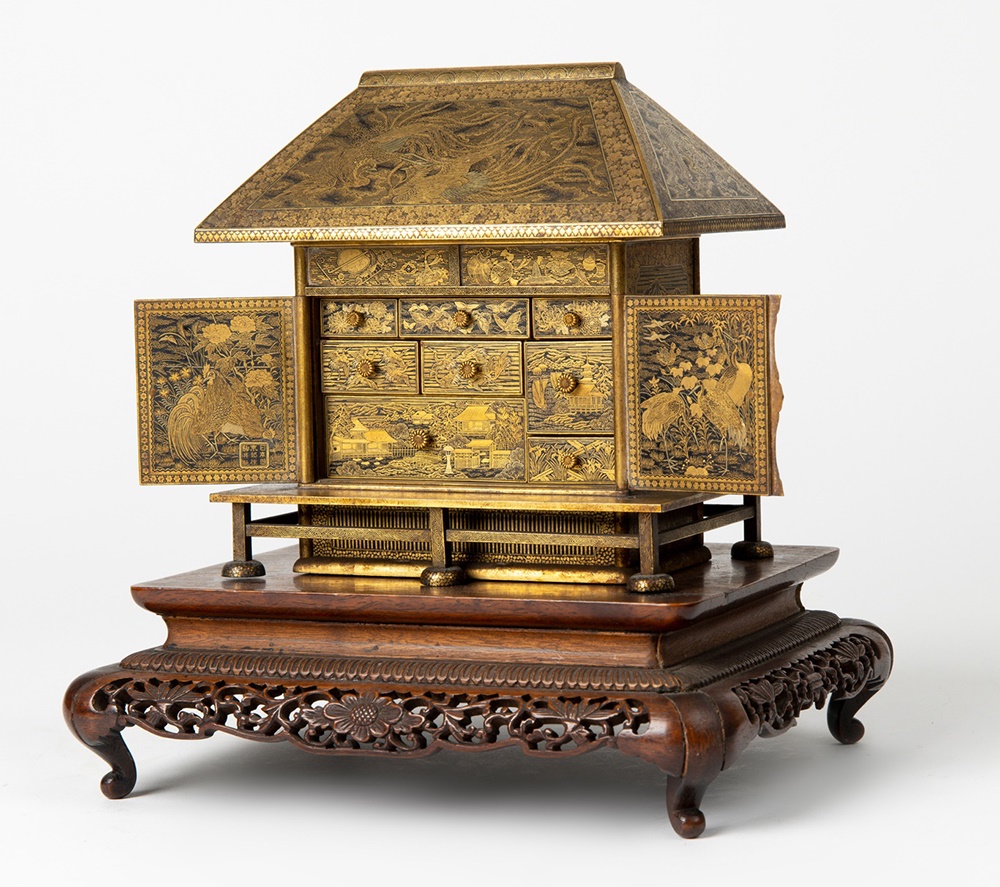 "Nunome-zogan" technique was imported to Japan in the 14th century from Damascus, Syria where it had been used since the 12th century. This technique was applied to sword furniture from the Muromachi period (mid 14th to late 16th century) and the tradition of the Nunome-zougan technique continues to survive in Kyoto, Ishikawa and Kumamoto in Japan as well as Toredo in Spain. 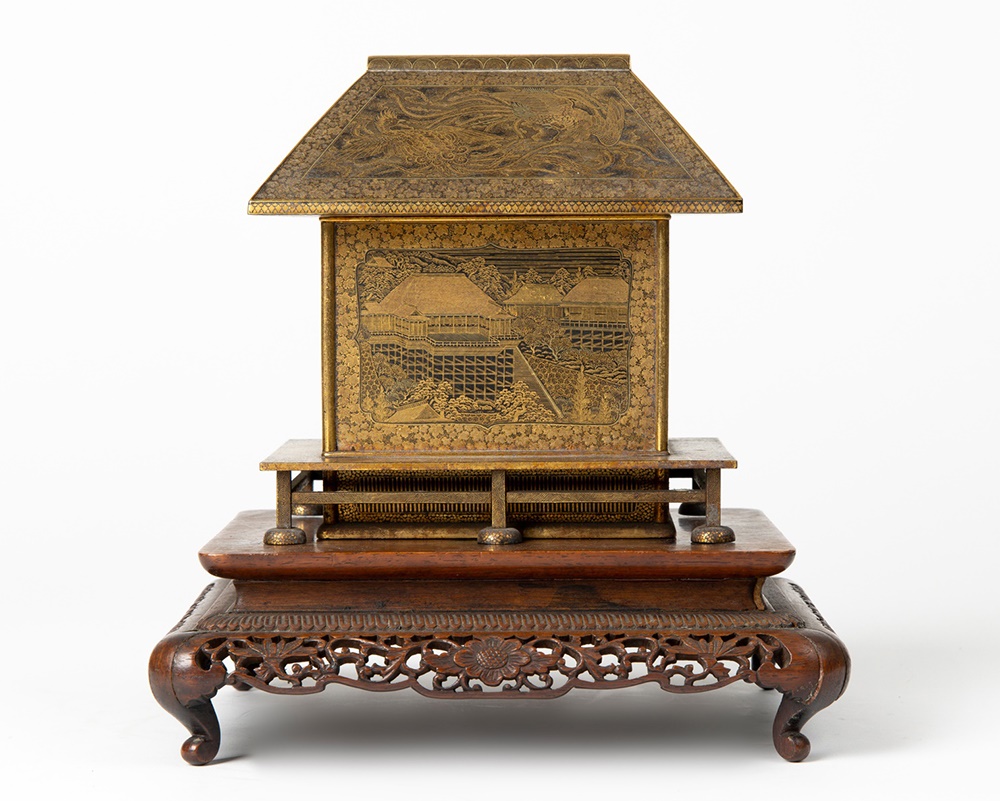 At the age of thirteen, Komai Otojiro studied inlay techniques with Misaki Shusuke, a sword-fitting artisan from Higo (present Kumamoto). Otojiro has begun producing decorative objects in 1873 before the 1876 Haitou-rei, can continued to devoted himself to make higher-quality pieces for national or foreign exhibition to establish the Komai brand. 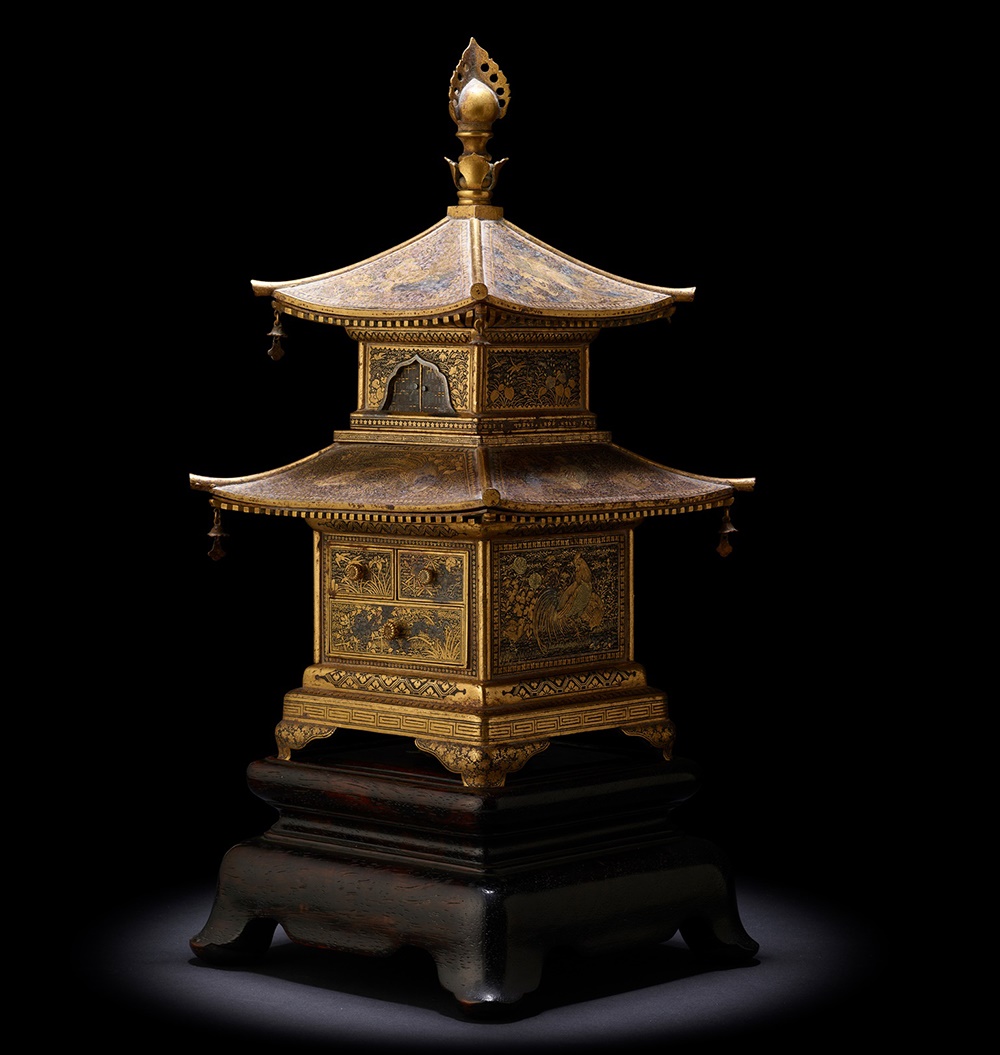 A further example by the Komai Company of Kyoto in our November 2022 auction was Lot 290, a fine inlaid iron cabinet modelled as a shrine. It is constructed in two removable storeys raised on a stepped square base supported on four bracket feet, and decorated with with cranes, magpies, phoenix and peacocks in rural settings or seasonal flowers.

Otojiro's works were shown at foreign exhibitions, including the Nuremberg Metalwork Exhibition of 1885, national exhibition (内国勧業博覧会) in 1903, Louisiana Purchase Exposition in 1904 and Exposition Universelle et Internationale de Liège in 1905. Produced for a limited amount of time, Komai items are now rare and highly collectible.