A Masterpiece of the Private Press Movement

The Kelmscott Chaucer had an unparalleled influence on book design and typography throughout the following century. We are delighted to offer a superb copy of this masterpiece of the private press movement in our 08 February Rare Books, Manuscripts, Maps & Photographs auction.

In 1891 William Morris founded the Kelmscott Press, at Hammersmith on the River Thames in London with the aim of reviving traditional hand-press printing, which had been superseded in practical terms since the advent of mechanised printing earlier in the century. In the words of his biographer Fiona MacCarthy it was to be ‘his last great opus in practical designing’.

Between 1891 and its closure in 1898 the press produced some 50 books, including editions of English classics and medieval texts, and of Morris’s own works. Morris counted Chaucer as one of his great discoveries while a student at Oxford, and he is known to have intended an edition of Chaucer’s works since the earliest days of the press. Printing eventually began in August 1894, and took nearly two years to complete, Morris himself designing the elaborate woodcut title-page, initial letters and foliate borders, and Edward Burne-Jones providing nearly 90 original illustrations of Chaucerian scenes. A total of 425 copies were printed (in addition to 13 on vellum), and initially advertised at £20 each, the anticipation being such that the entire edition was sold in advance of the publication date, with prices having risen steadily among booksellers beforehand. 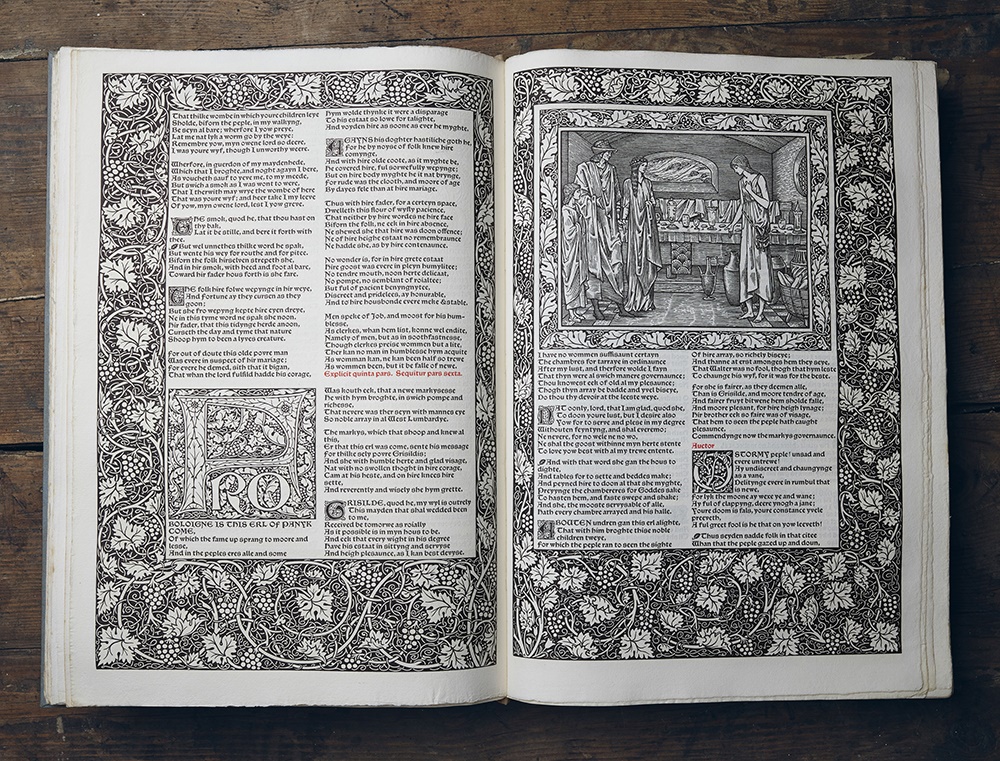 Morris himself had been in failing health for some time, and died in October 1896, a few months after printing was completed. Burne-Jones declared the Kelmscott Chaucer to be the finest book ever printed, and that if Morris ‘had done nothing else it would have been enough’. The inspiration and monument of the private press movement, no other book exerted such an influence on 20th-century typography and book design. To handle a copy is to handle a work of art, and to experience at first hand the ethos and creative genius of William Morris and his circle.