The Infant Christ as Salvator Mundi

An example of the hybrid sculptures produced in Goa during the period of Portuguese rule, this late 17th/early 18th century figure of the Infant Christ as Salvator Mundi displays clear European iconography with undoubtedly traditional Indian stylistic conventions.

The figure of the Infant Christ as Salvator Mundi was a highlight in our November 2021 Five Centuries auction.

Goa came under Portuguese rule in 1510,and subsequently became an eastern trading capital of the Portuguese empire and the seat of Christian imperialism, whose influence stretched from the Cape of Good Hope to the Sea of Japan. The Portuguese found a well-established infrastructure for ivory carving, with experienced artists and workshops. This explains the resulting hybrid of sculptures drawing from European iconography and traditional Indian stylistic conventions. 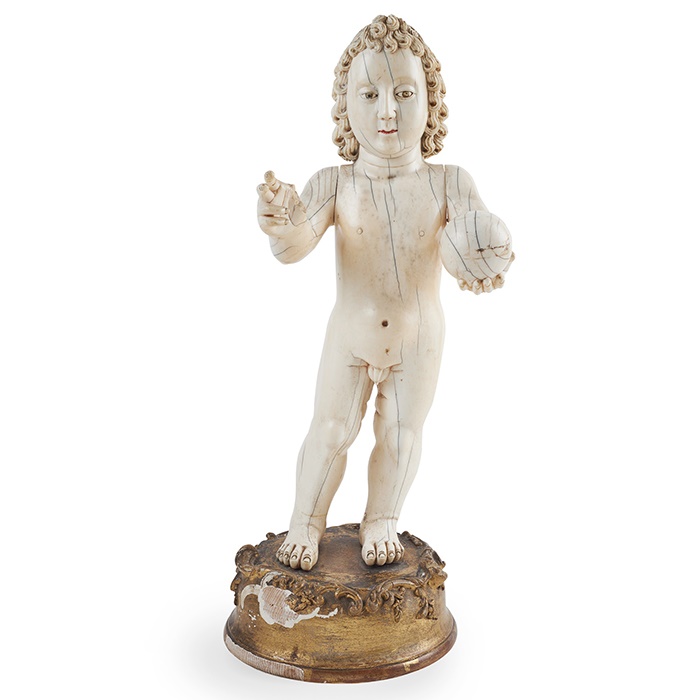 the child Christ standing with both arms extending, one holding an orb to represent the world in his left hand, his right hand raised in blessing, on a giltwood and gesso base
Figure 42cm high; 49cm high overall | Sold for £28,750 incl premium

Christ is depicted here in a variation of the Salvator Mundi image tradition: instead of the adult Christ he is depicted as a child, with the right hand raised in the typical gesture of benediction and left holding an orb, known as globus cruciger. This depiction of the infant Christ started appearing in the early 16th century, notably in the Infant Christ of Mechelen, and has gained popularity in Spain as the ‘Niño de la bola’ or child with a ball. Famous depictions go backto the artists Juan Martínez Montañés and Jerónimo Hernández de Estrada.

Despite its vigorous modeling, the figure was probably meant to be dressed in a luxurious garment, which would have been supplied by the faithful owner in acts of devotion. While the iconography is clearly of European origin, the style is undoubtedly Goan. The hair is carved in tight, regular coils, and the face with its round cheeks, big eyes and small mouth with remnants of polychromatic paint point to its Indian roots.