Innovative and distinctive, the 'Glasgow Style' has proved continuously popular since its inception in the late 19th century. We are delighted to present several works in the 'Glasgow Style' in our April 2021 auction of Design Since 1860. Here we take a closer look at a few highlights...

Associated with the Glasgow School of Art and pioneered by the 'Glasgow Four' - Charles Rennie Mackintosh, James Herbert MacNair, Margaret Macdonald and Frances Macdonald - the 'Glasgow Style' was an innovative, distinctive approach to art and design which employed stylised, linear and flowing motifs inspired by nature. Artists and designers working in the 'Glasgow Style' during the late 19th/early 20th century included Jessie M. King, Talwin Morris, E.A. Taylor and many more.

We are delighted to present several fine examples of the 'Glasgow Style' in our forthcoming Design Since 1860 auction. Here, we have highlighted a few key pieces featuring in the sale...

Initially apprenticed in the Glasgow shipbuilding industry, E. A. Taylor trained as an artist at the Glasgow School of Art, where he met Jessie M. King around 1898. Taylor joined the Glasgow cabinetmakers and retailers Wylie and Lochhead as trainee designer in 1893. His furniture designs for the firm brought him great acclaim with exhibitions at the 1901 Glasgow International Exhibition and, with his fiancée Jessie King, a series of stained-glass panels for the Turin International Exhibition of Modern Decorative Art in 1902. Taylor went on to lecture in furniture design at Glasgow School of Art from 1903 to 1905. In 1908 he married Jessie King and moved to Manchester to manage and design for George Wragge Ltd where he produced many designs for stained glass. Between 1911 and 1914 the Taylor’s lived in Paris where they established an art school – the Shealing Atelier. This rare cabinet by Taylor combines his skills as a furniture maker and stained-glass designer and was available to buy in mahogany or, in this rarer version, in oak. 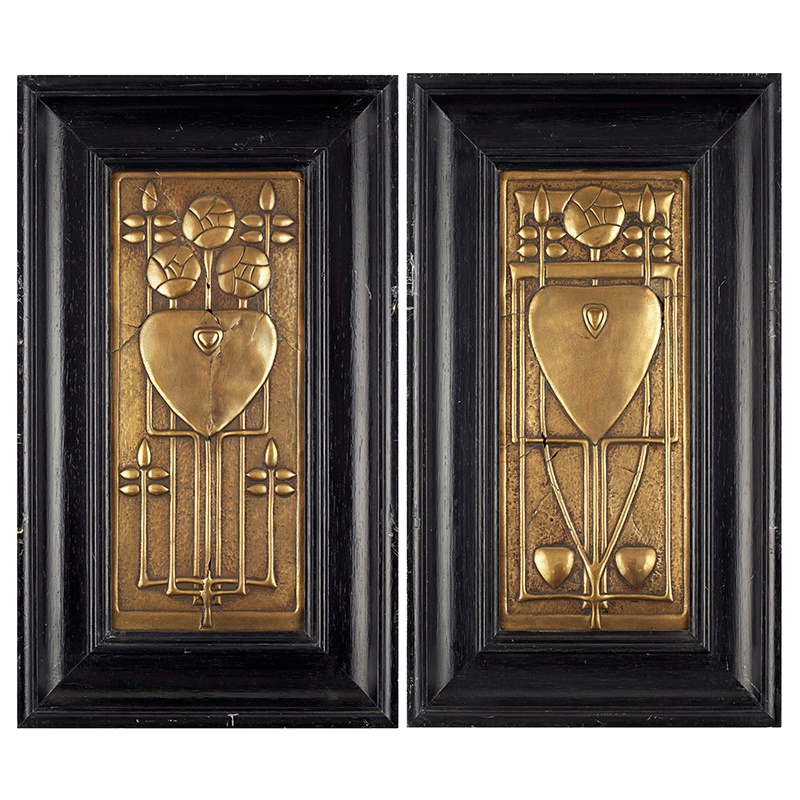 After spending part of his early career working as an art editor in London, Talwin Morris took up a post as Arts Manager for Glasgow publisher Blackie & Son in 1898, a position he held until his death in 1911. He quickly became acquainted with Charles Rennie Mackintosh and the circle of artists associated with Blackie and the Glasgow School of Art, which had a significant influence on his work. Perhaps best known for his book designs, Morris also produced pieces of furniture, textiles and metalwork, which were incorporated into many of his decorative schemes, including his own home at Dunglass Castle and the refurbishment of W.W. Blackie's Printing Works where these panels formed part of an entrance screen. The panels demonstrate the key characteristics of the 'Glasgow Style', with their heavily stylised and linear plant forms and Glasgow roses. 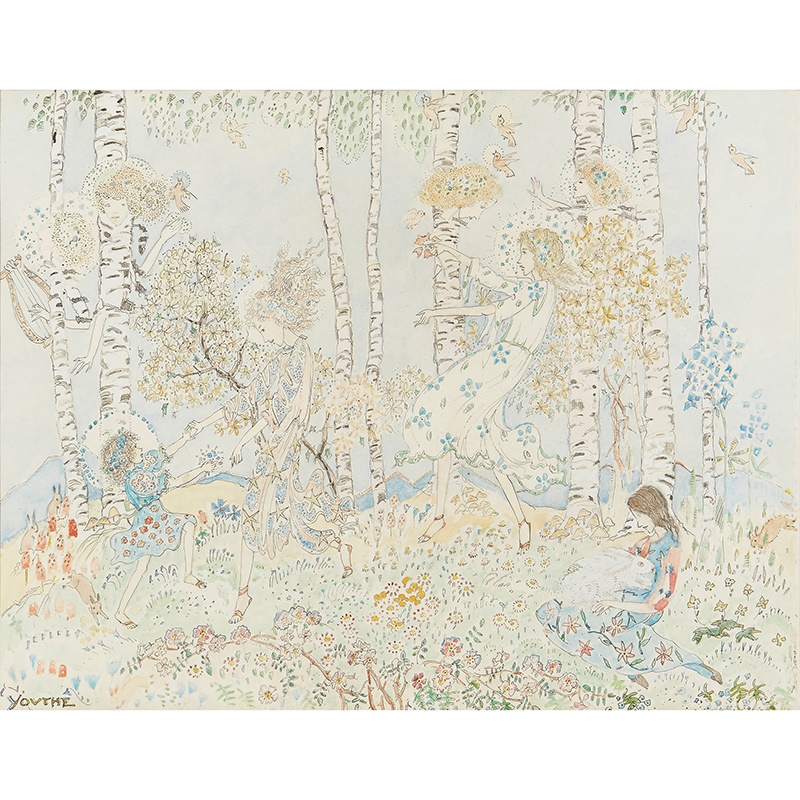 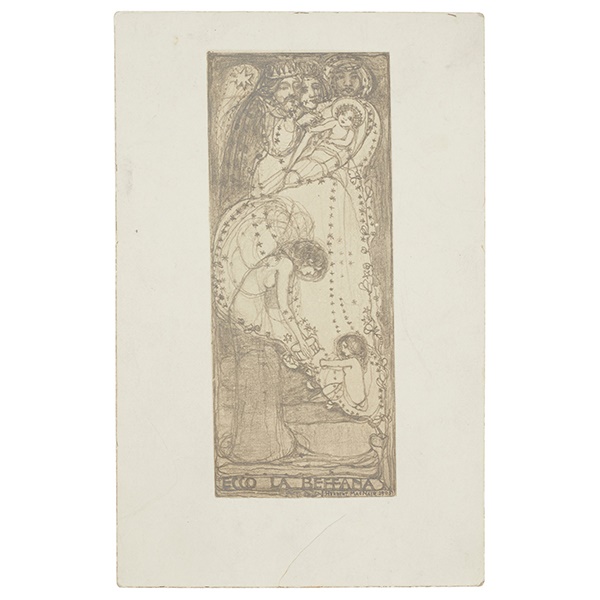 In Italian folklore, Befana is an elderly woman who delivers gifts to children throughout Italy on Epiphany Eve in a similar way to St. Nicholas or Santa Claus. A popular belief is that her name derives from the Feast of Epiphany. 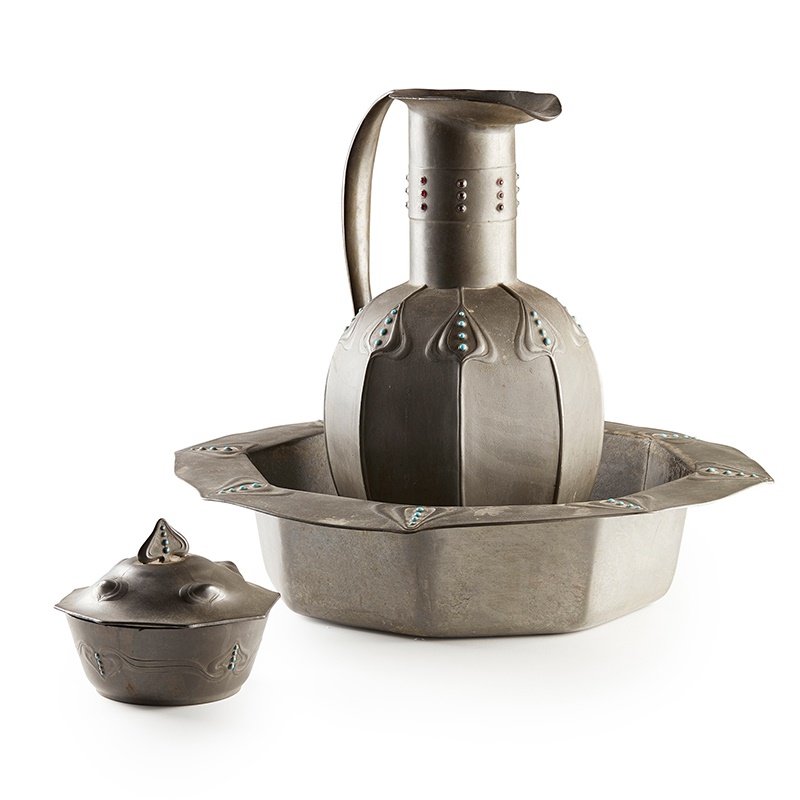 A similar toilet set, designed by George Logan for Wylie & Lochhead, was exhibited by them at the Glasgow International exhibition of 1901, and at the pioneering Turin exhibition in 1902, marking the first and only time Logan’s work was exhibited alongside the designs of Charles Rennie Mackintosh. There are only two other known examples of this set, and both are currently in public collections, one belonging to The National Trust, Standen and the other to Glasgow Museums and Galleries.

Wylie & Lochhead collaborated with many designers in the Glasgow Style, such as John Ednie and E. A. Taylor, however it was Logan who had the earliest and longest partnership with the company. For the 1901 exhibition, Logan designed the library and bedroom, and the ewer and basin would have been displayed on the washstand which formed part of the interior scheme. The full extent of Wylie & Lochhead’s involvement in the production of the set is not yet known. However, the stamped marks to the ewer indicate the set was sub-contacted out to Walter Scherf’s company. Indeed, the company would have been familiar to UK firms and retailers; following the prominence of the Art Nouveau aesthetic in 1899, Liberty’s began trading a range of pewter-wares manufactured by German firms, including Scherf’s ‘Osiris’ brand. The ewer at Standen is similarly marked and decorated with turquoise cabochon stones, which are lacking from the Glasgow example. Uniquely, the present lot has also survived with its matching soap dish.