The First Fleet and the Sydney Cove Medallion

An object of great importance in ceramic history and the history of travel and exploration, the Sydney Cove Medallion is an original artefact from the voyage of the First Fleet under Captain Arthur Phillip, which marked the beginning of European settlement in Australia. We are delighted to present this rare and important piece to auction in our November Five Centuries sale.

THE FIRST FLEET AND THE SYDNEY COVE MEDALLION

Captain Arthur Phillip landed at Botany Bay in January 1788 with orders to establish a penal colony, which he did some twelve miles north at Sydney Cove, now Sydney Harbour. The settlement he founded is the direct ancestor of the modern Australian state and has been viewed favourably by historians as a model of just and pragmatic governance. 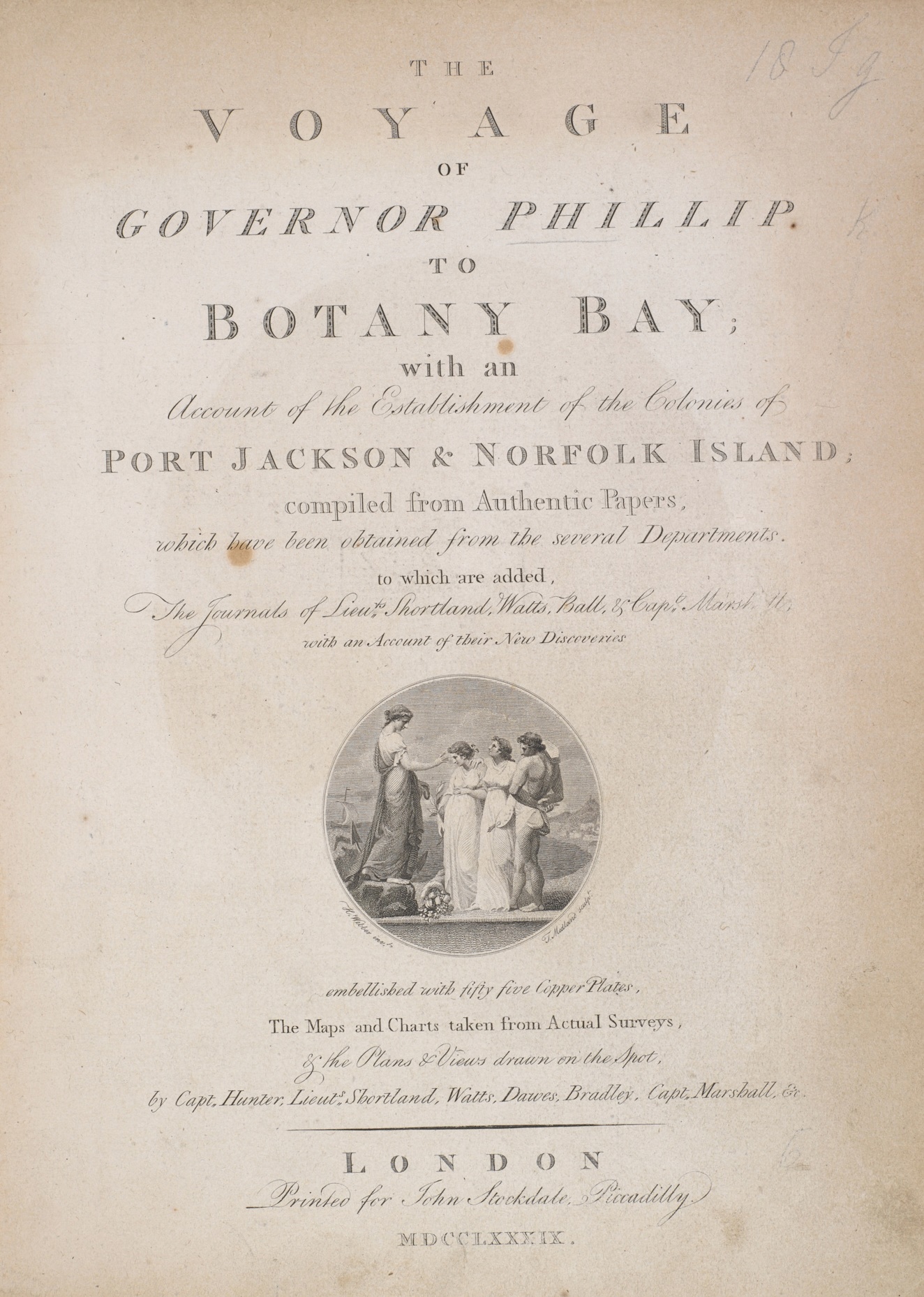 Engraving of the Sydney Cove medallion by Thomas Medland, from The Voyage of Governor Phillip to Botany Bay, published by John Stockdale, 1789.

Exhibiting a fineness of detail made possible by the unique qualities of the Sydney Cove clay, the medallion is a superb embodiment of the ingenuity of one of 18th century Britain’s leading industrialists.

The medallion was made at Wedgwood's Etruria factory in 1789. It was designed by Henry Webber and modelled by Wedgwood’s principal modeler, William Hackwood. It is moulded in bas-relief with a classical scene depicting Hope, encouraging Peace, Art and Labour, to work for the prosperity of the new young settlement. The original medallions range in colour from pale biscuit to a dark brown, almost black colour, as represented by the example being offered.

In 1770 Captain James Cook discovered the Australian continent and claimed part of it for Britain. With the loss of British colonies in North America, the British were keen to expand their territories in other parts of the world and the government decided to found a settlement in Australia. In 1788 Captain Arthur Phillip became First Governor of the state of New South Wales, where he had been commissioned by George III to create a penal colony, as a way of dealing with the overcrowding in British prisons and prison ships. Eleven ships, carrying over a 1000 people, including 850 convicts and 200 officers, put down anchor at Sydney Cove on 26th Jan 1788. This is now known as ‘The First Fleet’. In November of that same year Captain Phillip wrote to Sir Joseph Banks, who was president of the Royal Society and had accompanied Captain Cook on his 1768 expedition, to inform him that he had found minerals and white clay in the area. He sent samples of these to Banks at the end of 1788. Banks directed the minerals to the relevant scientists, and he sent the clay directly to his friend and fellow Royal Society and Lunar Society member, Josiah Wedgwood, for him to investigate its potential for ceramic production. Wedgwood worked with the clay and was very pleased with its qualities.

Two batches of medallions were produced from the clay sent back to Sir Joseph Banks. From the first batch of medallions Wedgwood sent an example to Banks and on 12th March 1790 Wedgwood wrote to him:

“I have the pleasure of acquainting you, that the clay from Sydney Cove, which you did me the honour of submitting to my examination, is an excellent material for pottery, and may certainly be made the basis of a valuable manufacture for our infant colony there. Of the species of ware which may be produced from it, you will have some idea from the medallions I have sent for your inspection.” [1]

Medallions from the first batch were to be sent to Sydney Cove, for the attention of Governor Phillip, on the ‘Second Fleet’ and they were to be distributed at his discretion. By November 1789, a second batch of medallions had been completed. Wedgwood’s friend, the physician and poet Erasmus Darwin, was the recipient of one. He wrote to Wedgwood:

“I have received great pleasure from your excellent medallion of Hope. The figures are all finely beautiful and speak for themselves.” [2]

In Nov 1789, an account of ‘The Voyage of Governor Phillip to Botany Bay’ was printed by the publisher John Stockdale. On the title page there is an engraving of the Sydney Cove Medallion and a description of it:

“The elegant Vignette in the title-page was engraved from a medallion which the ingenious Mr Wedgewood caused to be modelled from a small piece of clay brought from Sydney Cove. The clay proves to be of a fine texture, and will be found very useful for the manufactory of earthenware. The design is allegorical; it represents Hope encouraging Art and Labour, under the influence of Peace, to pursue the employments necessary to give security and happiness to an infant settlement.” [3]

It is unknown how many medallions of the original issue were produced. The whereabouts of 10 are currently known. [4] As the medallions would have taken considerable time and skill to make Richard Smith suggests in his Sydney Cove Medallion essay that:

“Wedgwood would have made no more than was necessary for the publicity value. One for Erasmus Darwin; a few for Sir Joseph Banks as President of the Royal Society for his own distribution; perhaps fifteen or twenty for Governor Phillip’s distribution. The total production may have been somewhere around two dozen, probably no more.”

Despite having carried out thousands of ceramic experiments over many years, it appears that Wedgwood was proud of creating the Sydney Cove medallion, producing a special issue to commemorate the settlement at Sydney Cove. These medallions record the start of a new chapter of colonial history as well as symbolising Wedgwood’s skill and technical innovation, which was at its height at this time. The medallions are fine and fragile in nature. Surviving examples are rare and are seldom seen on the market.

Josiah Wedgwood (1730-1795) is known today as a man of vision, an entrepreneur and innovator, who united art and industry.

He was born in 1730 in Burslem, into a family of potters and was the last of twelve children. His knowledge of the trade began early. He was apprenticed, aged 14, to his elder brother, where he learned the skills of throwing and handling clay. Following his apprenticeship he worked for five years with the skilled and respected potter Thomas Wheildon. Following this Wedgwood started his own business in 1759, manufacturing ‘useful’ domestic ware. In 1762 he encountered the Liverpool merchant Thomas Bentley, who became a lifelong business partner and friend, keeping Wedgwood informed in matters of current fashions, taste, and commercial advancement. Wedgwood bought a 350-acre estate and proceed to build his own factory, Etruria, which opened in 1769. The name alluded to the ancient Greek and Roman pottery that inspired his designs and which he believed to be Etruscan. The factory was situated beside the newly built Trent and Merseyside canal (Wedgwood had played a key role in its creation) and included housing for the workers and childcare for their children. At Etruria, Wedgwood worked feverishly to achieve his ambitions of creating ceramics that were equal to, if not surpassing, pieces from the classical past. He kept an experiment book, recording his trials with bodies and glazes. The details of these were written in code, so the secrets remained his own.

Wedgwood was elected to the Royal Society in 1783, and was one of an informal group of influential men who formed the Lunar Society of Birmingham, who met to discuss the scientific, intellectual and political issues of the day. Although much of his clients wealth will have come directly or indirectly from the slave trade, Wedgwood was an abolitionist who campaigned for social change and joined the committee for the abolition of the slave trade in 1787. He produced medallions, depicting a kneeling slave in chains, inscribed ‘Am I not a Man but a Brother’, to promote the cause of humanity and freedom.

Wedgwood created creamware, stoneware and jasperware that became as fashionable as the porcelain made by his competitors. He was forward thinking, embracing, and promoting the taste for Neo-Classical design. His tireless energy for experimentation and innovation and his ability to master both the artistic and commercial worlds left a lasting legacy and changed the course of ceramic history.

[3] From the Account of the Vignette in The Voyage of Governor Phillip to Botany Bay, printed for John Stockdale, Piccadilly, London, 1789, p.vi

[4] The whereabouts of ten original issue medallions is known at the time of writing. In addition to the medallion being offered for sale, two are in UK museums: one in the British Museum; one in the Lady Lever Art Gallery. There is a broken medallion at the V&A, which is listed as being a 1789 example, although it is unclear if it has the original impressed makers mark to the reverse. Others are in Australian museums and institutions: five in the State Library, New South Wales; one in the National Museum of Australia; one with the Sydney Living Museums Corporation; one in the Silent World Foundation. In 2014 a medallion was offered for sale by an Australian antiques dealer and is now in private ownership.