The Universal Language of Art

“Since I used to play amidst the beautiful temples and pine trees or on the sandy beach, I have wanted to appreciate the best in nature and to be able to help everyone else to do so."

“Since I used to play amidst the beautiful temples and pine trees or on the sandy beach, I have wanted to appreciate the best in nature and to be able to help everyone else to do so. As I go forward I realize increasingly that it is not a matter of East or West, someday there will be Art from a New World Civilization, the creation of which, as a painter, I wish to contribute to. Art is a universal language that speaks to every human heart.” - Teng Chiu, "A Chinese Painter's Exhibition in Europe"

Born in Xiamen, Fujian Provence in 1903 to a prestigious family, Teng-Hiok Chiu (Zhou Tingxu; also known as Teng Chiu, 1903–1972) had the opportunity to study abroad from a young age. By 1924 he had enrolled in the University of London, and in 1925 studied Western painting under the tutelage of Sir George Clausen, Sir Walter Russell and Charles Sims at the Royal Academy Schools. He became the first foreigner to be granted membership of the Royal Society of British Artists. 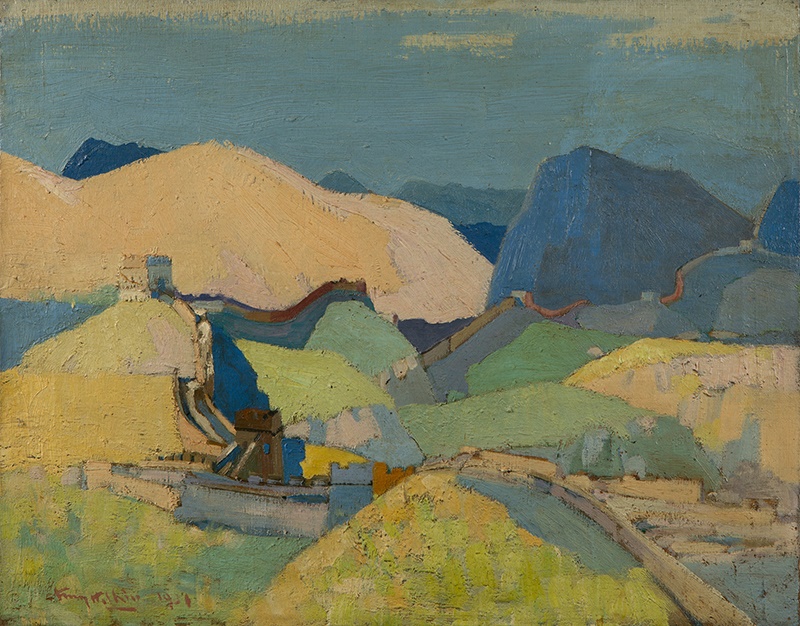 Chiu also trained at the School of the Museum of Fine Arts in Boston, and Paris, but he reached the turning point in his career when working alongside his mentor Laurence Binyon, a renowned Oriental scholar, in the British Museum in 1930. Working together they analysed many significant Chinese calligraphic works and paintings and it was from this point onwards that Chiu fused Eastern and Western artistic ideas and philosophy, to produce works with Chinese sensibilities and Western technique.

From 1930 Chiu travelled extensively through Europe, Africa and Asia, including his homeland Xiamen in China. During this trip Teng Hiok Chiu depicted the lakes and mountains of his native land, and important architecture and monuments including this significant work by Chiu of the Great Wall. It is probable that this is the work that was exhibited in his one-man show at The Fine Art Society in London from 18 November to 4 December 1936 as No. 37. In the preface to the catalogue Binyon wrote:

“Mr. Chiu has travelled over many parts of the world, in the East and in the West, and has developed an eclectic style, in which it seems to me that through all the mastered technique of Western oil-painting the original Chinese element becomes more apparent than in the pictures shown six years ago […] Mr. Chiu, […] like so many Oriental painters who practice the Western style, found it a heavy and unpleasing means of expression: he has subdued it to a lightness of handling and felicities of colour natural to his gift.” (See T. H. Chiu, An Exhibition of Paintings by Teng H. Chiu, A.R.B.A. (London: Fine Art Society, 1936); ‘A Chinese Oil Painter’, The Times, 18 November 1936, p. 12.)

This work commemorates the shared experience of Binyon and Chiu in China, and can be considered a significant work in the development of Chiu’s oeuvre.