Silver by the Barnards

We were delighted to present a Victorian soup tureen by The Barnards dating to 1845 in our March 2022 auction of Silver & Objets de Vertu.

The Victorian era epitomised social mobility. The wealth rapidly generated by individuals created new personal legacies and this was displayed through their charitable donations as well as their domestic settings, which were most often on a grandiose scale.

The scale of this soup tureen in what would have been the latest fashion is a clear demonstration of success and wealth. The owner, Sir James Campbell was born into humble origins in 1790, but elevated his status as rose through the social ranks in classic Victorian fashion.

Having been apprenticed to McLachlan & McKeand, who managed warehouse facilities in Glasgow, Campbell learnt his craft quickly and at the age of 20 started a clothier business with Matthew Paterson. Eventually, with his brothers, they formed J & W Campbell & co. which also retailed in drapery and dry goods. 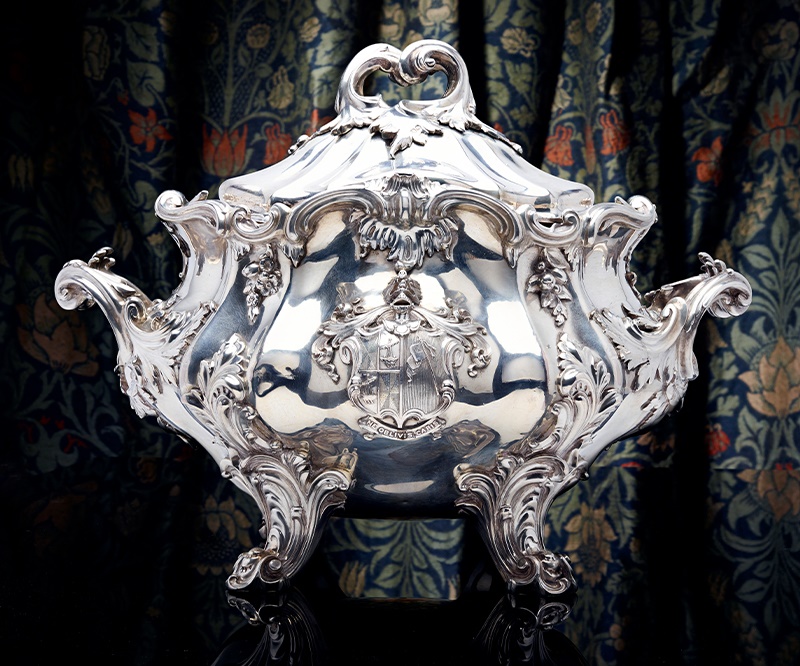 The success of his business ventures led to the post of Lord Provost of the City of Glasgow between 1840-43. He settled in Glasgow first at Kelvinside House, and then at Bath Street with his wife, who he married in 1822, where they had six children. Campbell’s investments in his work and personal life led to him becoming a well-respected member of society and his efforts were rewarded in 1843 when he was invited to St. James’s Palace to receive the accolade Knight Bachelor from Queen Victoria.

In the space of one generation, the Campbell family had elevated their social status and this continued even further with the next generation; Campbell’s second son born 1836, Henry Campbell- Bannerman, became the First Lord of the treasury and Prime Minister of the Liberal Party in 1899-1905. 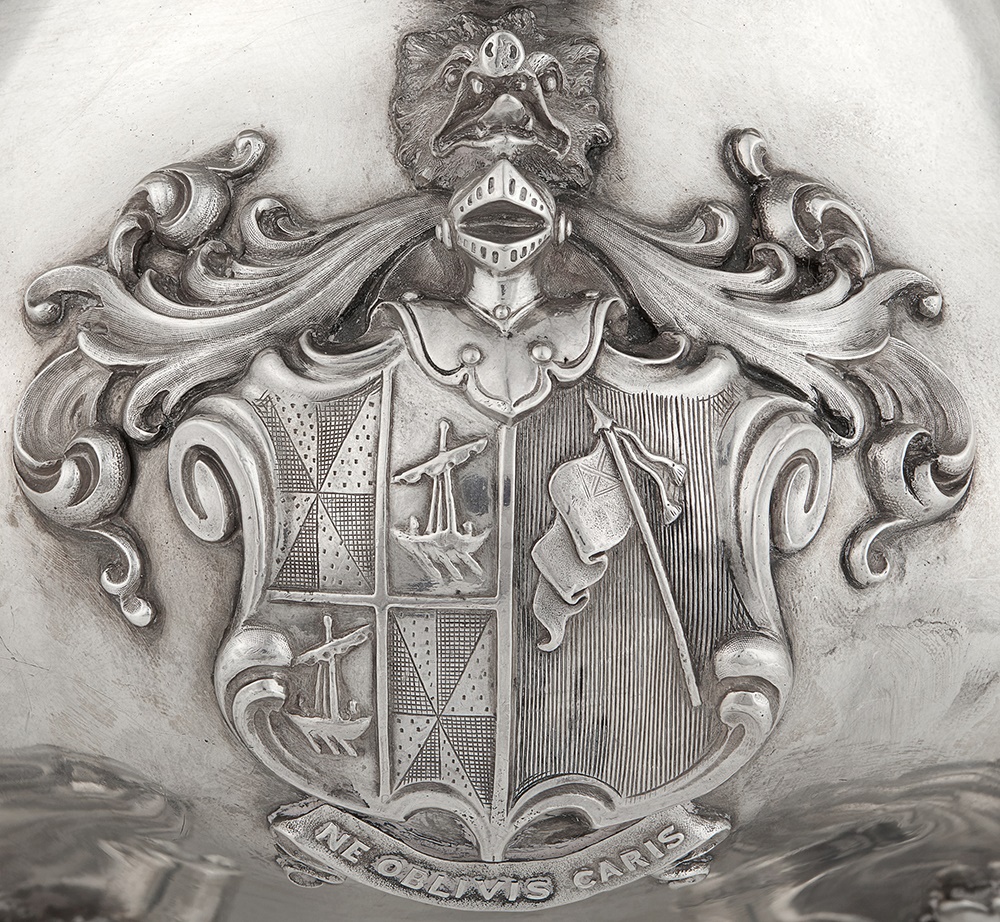 By 1910 the firm was converted into a limited liability company and in 1977 became a subsidiary of Padgett & Braham Ltd. (Pg29 The Directory & Silversmiths… John Culme’). Famous for reproducing iconic museum specimens such as The Warwick vase, the copy itself is now in the collections of the Victoria & Albert (2013,8016.1.a-b), the company was able to attract wealthy clients with their pre-manufactured wares, which in turn led to bespoke commissions.

Pre-made casts and dies form part of the comprehensive archive which also includes corporate, financial and staff records; purchase, order, letter, stock and pattern books, all of which can now be found in the Victoria & Albert archives (reference: AAD5-1988, AAD7-1989.) 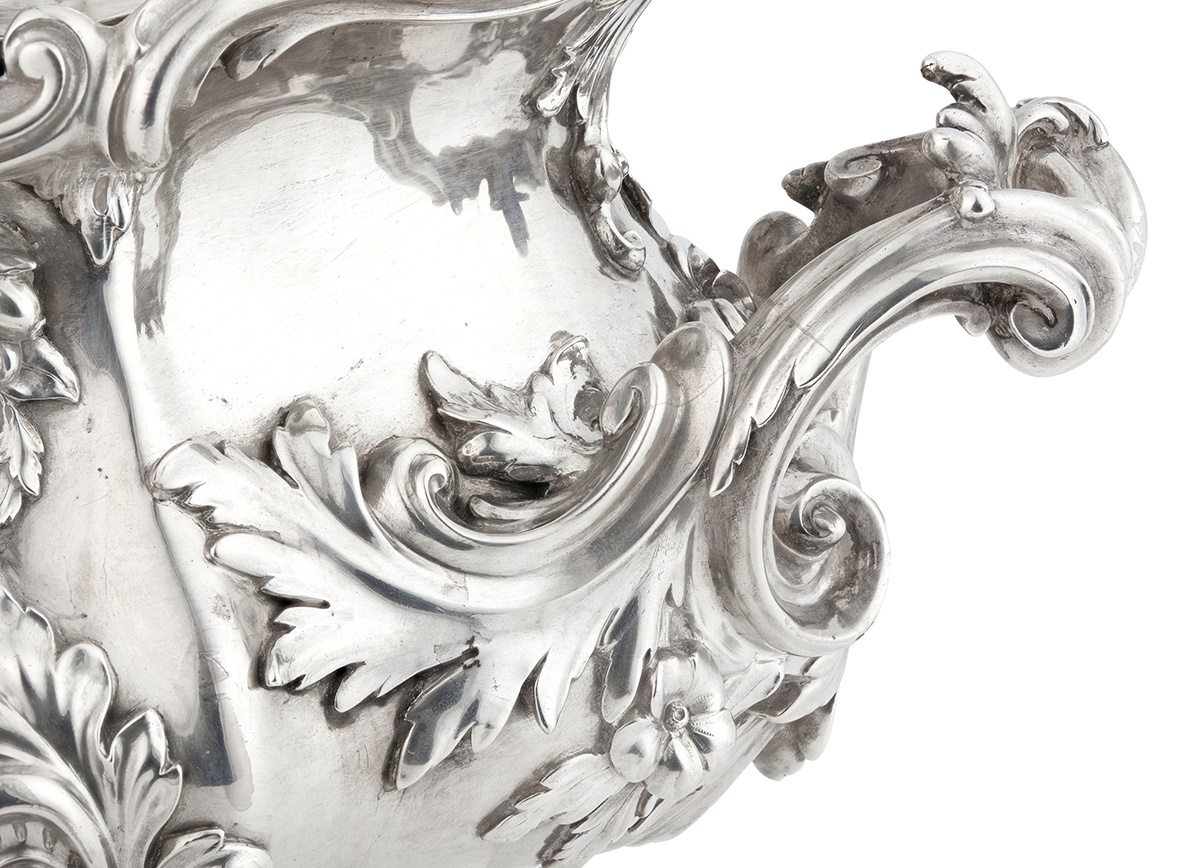 While the Barnards produced a wide range of silver from small christening cups, table and tea wares their real skill can best be seen with the commissions requested from their clients. Their relationship with their clients can clearly be seen in their attention to detail, Lot 469 from The Ballyedmond Collection at Sotheby’s auction house on the 23rd May 2017, ‘A Soup Tureen of 1827’ has an impressive horse finial, achieving £7,500 and lot 87 from a Bonham’s Silver auction on the 12th November 2014, A pair of Tureens with the finials modelled as wheatsheaves, plough harrow, barrow and a basket which made £31,250, indicate individual commissions with specific requests.

By the time of the production of this soup tureen the firm had settled at Angel Street, St. Martin’s-le-Grand, right in the City of London off Cheapside. With members of staff skilled at casting, engraving and forging, the factory would have been a hive of activity.

A personalised aspect of the tureen is the armorial fashioned by John Campbell it directly mirrors that of the Duke of Argyll. At the time of the manufacture of this tureen, Campbell bore these arms without authority, the arms being those of Campbell, Duke of Argyll. In order to correct this heraldic anomaly, he matriculated arms twice at the Court of the Lord Lyon, firstly on the 2nd September 1859 [Lyon Register – Volume 6, folio 15] and secondly on the 5th January 1869 [Lyon Register – Volume 8, folio 18]. Both these matriculations recognised Sir James in the territorial designation of ‘Campbell of Stracathro’.

Campbell’s aspirations were never out of reach and two years after the commission of the tureens in 1847 the Campbell’s moved to an impressive estate in Stracathro. "Country Houses of Scotland," by John Connachan-Holmes, describes Stracathro "amongst the first rank of neo-classical architecture" and would have been a fitting home for such an impressive piece of silverware.