In February 2021, our live online auction of A Celtic Vision: A Private Collection of Scottish Paintings  recieved the 'white glove' treatment with 100% of lots sold.

A carefully curated private collection of Scottish paintings received the ‘white glove’ treatment this February in our live online auction. The sale of 75 works offered under the banner A Celtic Vision was 100% sold with the total doubling the pre-sale estimate.

“Our vendor is delighted. The level of interest from bidders was thrilling and some of the sums paid were in excess of retail. It shows once again that Scottish paintings sell best in Scotland.”

The title of the sale reflected both content and context. The vendor, a Welshman, had begun his collecting odyssey some 25 years ago after receiving the 1917 oil Swan Lake by Edward Atkinson Hornel (1864-1933) as a gift. It had prompted a visit to Kirkcudbright and Galloway in search of information and inspiration. From then on, every holiday was spent in Scotland hunting for paintings by some of its most celebrated 19th century, 20th century and contemporary names. Artists from Archibald Thorburn to Alan Davie and Peter Howson were represented.

Some of the strongest prices of the day were paid for pictures by Elizabeth Blackadder (b. 1931) and her late husband John Houston (1930-2008). Five works by Scottish ‘national treasure’ Blackadder included one of her coveted feline studies. Three Cats, a pastel signed and dated 1992 that was exhibited at the Royal Academy that same year. It sold for £10,625*, the same sum commanded by Houston's boldly painted Oriental Poppies 1, signed and dated 1984.

Nine sketches by John Duncan Fergusson (1874-1961) represented a cross-section of his oeuvre from the academic studies of his early years in Edinburgh - the beautifully executed Woman in a Large Hat sold at £3000* - to the angular and economic lines of his mature ‘European’ technique seen in Figure Promenading, Harlech sold at £2000*. The latter, sketched c.1921 in the Gwynedd resort where his partner Margaret Morris held a summer dance school, shows a debt to both Cezanne and the Vorticist movement. 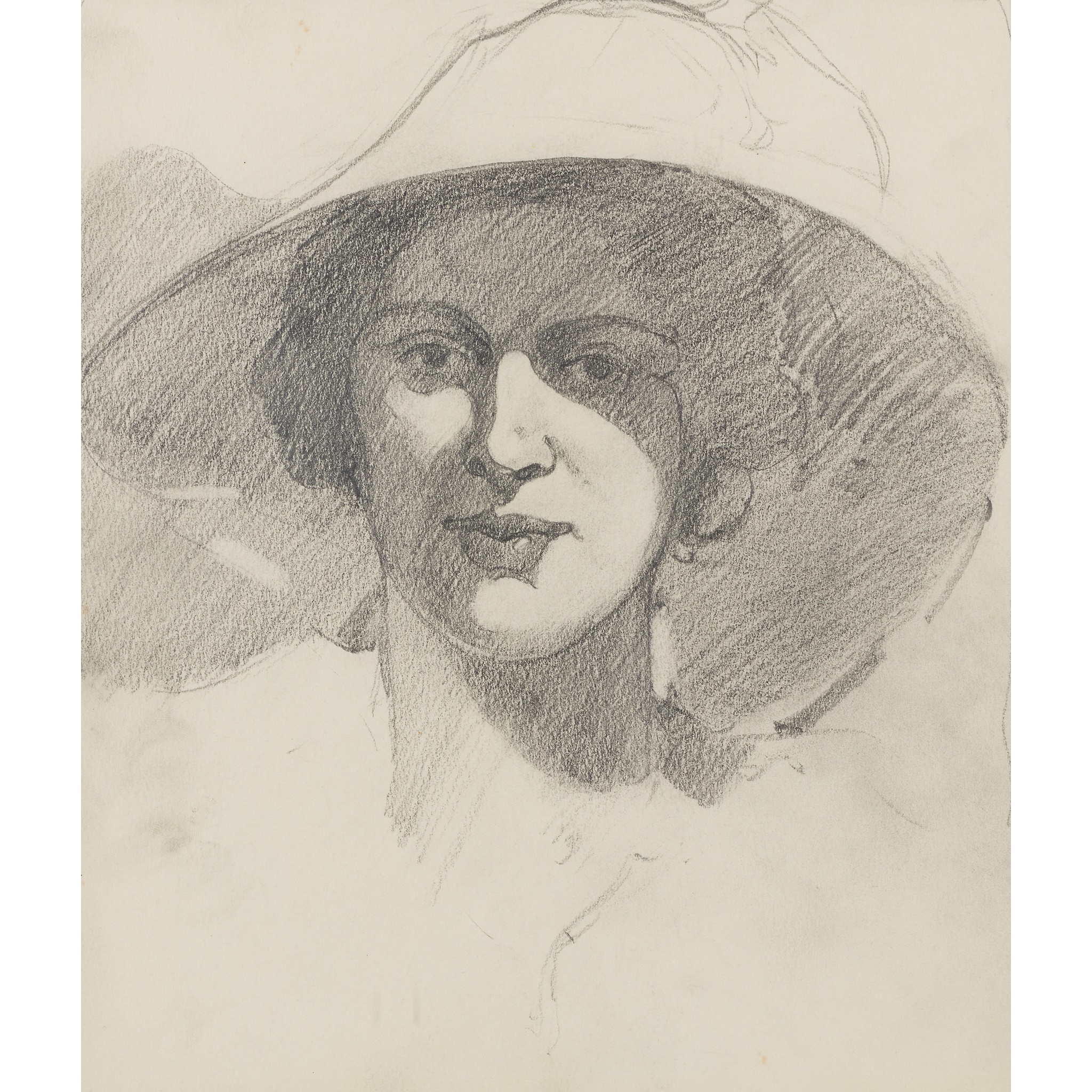 Perhaps the most significant sketch in this selection was Flowers and Fruit, a pen, ink and wash of 1911 that relates directly to a handful of Colourist oils Fergusson painted between 1910-12. As detailed to a label verso reading "not to be worked on lineblock....size of letterpress opposite (not half tone) lineblock" it was created for publication, probably in the journal Rhythm, for which Fergusson worked as art-editor in Paris from 1911-13. For unknown reasons this still life was never dispatched to the printers: something that doubtless contributed to its survival. The selling price was £4000*. 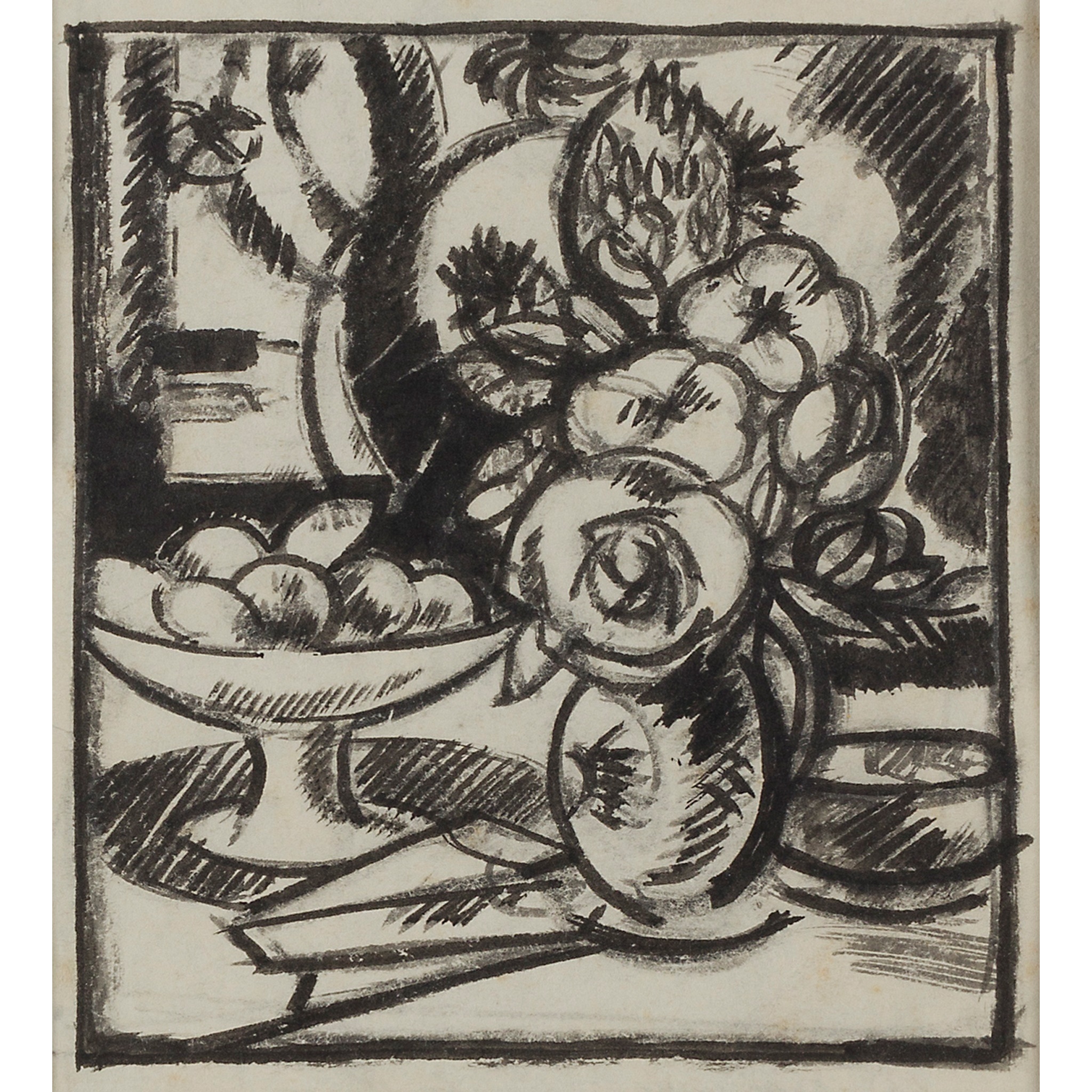 Despite the now familiar ‘lockdown’ conditions that prohibited a public view, the 75 works were hung artfully in L&T’s Edinburgh saleroom and many buyers chose to inspect potential purchases by taking a virtual tour from the safety and comfort of home.

Signed, pencil and watercolour | 51cm x 61cm (20in x 24in) | Provenance: The artist's estate through the Open Eye Gallery

Sold for £10,000* was The Harbour at Camogli, a pencil and watercolour by Alberto Morrocco (1917-1999) with a provenance to the artist’s estate while another watercolour, The Lily Pond by Charles Oppenheimer (1876-1961) brought £5500*. The latter was originally owned by Robert Baird, ghillie of the duck pond in the painting at Kirkchrist where Oppenheimer used to shoot. Oppenheimer was so grateful for the use of the area that he painted the picture for Baird whose grandson later found it, carefully wrapped and stored under a bed.

Our Scottish Paintings & Sculpture auctions feature work from the 18th to the 20th century, from the Romantic landscapes of Alexander Nasmyth and portraiture of Allan Ramsay and Sir Henry Raeburn, to the highly collectable works of Joan Eardley and Anne Redpath. All Scottish Art movements are represented, including the Glasgow Boys, the Edinburgh School and, of course, the Scottish Colourists: Peploe, Fergusson, Hunter and Cadell.

Our specialists are experts not only on the works of Scottish artists, but also on the workings of the art market, and it is this combination that fuels our on-going success in the field.

LEARN MORE ABOUT THE DEPARTMENT ⇒