Discover the lives of the ancient Chinese literati scholars through a specially curated selection of pieces featuring in our 14th May auction of Fine Asian & Islamic Works of Art.

A class of literati scholars first emerged in ancient Chinese society as early as Confucius’ (551-479 BC) era, becoming extremely sophisticated during the Ming dynasty (1368-1644). Wen Zhengming (1585-1645) published the treaties Zhangwu zhi (‘On superfluous things’) in 1621, describing the ideal environment of the scholar’s studio with its utensils and possessions. In this spirit, the literati scholars felt compelled to proudly live their lives according to an established set of rules in styles and taste, collecting works of art that were not only utilitarian, such as boxes, brush pots, washers, but revealed a level of sophistication and a fondness of antiquity.

the cylindrical body supported on five cloud-shaped feet, intricately carved around the sides with a continuous mountainous landscape, the rocks and trees framing various vignettes, including scholars having tea around a kang table in a courtyard and an attendant bringing out a teapot; scholars walking leisurely in the meandering mountain path leading to a pavilion; a seated scholar reading on a rock accompanied by his attendant, whilst two other scholars seated on mat in conversation, the stone of dark spinach-green tone with some black inclusions

Apart from scholar’s objects, images of scholar’s life also vividly preserved in various medium/ material culture. A spinach-green jade brush pot (lot 21) carved minutely with some scholars having tea around a kang table, some walking leisurely in the meandering mountain path, and one seated scholar reading on a rock. A blue and white basin depicted 'Seven Sages of the Bamboo Grove' (lot 40), a group of seven Chinese scholars of the 3rd century, playing musical instruments. An ivory carving of a napping scholar (lot 18) and a famille rose circular plate depicting a scholar napping in a garden (lot 56) both of which change our impression of the rigidity of scholar’s life.

potted in bulbous body and lipped rim, the body decorated with the famous 'Seven Sages of the Bamboo Grove' playing musical instruments, the scene set amongst a mountainous landscape with clouds

During the tough time of the pandemic, with lockdown in place all over the world, working from home has become the new normal. With people around the globe adapting their lives and homes to best continue as normally as possible. Used in scholar’s studios, these ancient ‘working from home’ tools will hopefully continue to bring the same pleasure to new collectors as the ancient scholars before them.

Here we take a look at a few highlights from our forthcoming auction of Fine Asian & Islamic Works of Art...

of ruyi form, supported on a short straight foot, the flat top finely carved with a cartouche enclosing a meandering sprig of soapstone-inlaid peonies surrounded by a key-fret border, the straight sides carved with square and hexagonal pattern incised with starburst, the patinated bamboo of a warm honey-brown colour

of square form, carved with canted edges, the gradually curved sides terminating to a lipped mouth rim, each side carved in low relief with knotted ribbons

elegantly rendered as a finger citron, also known as 'Buddha's hand' for its shape, borne on a short twig with the finger-like sections gently curling upwards, the top of the fruit with a circular opening and body hollowed as a vessel, the stone of even translucent pale green colour, on a fitted wooden stand carved in openwork with various small finer citrons on leafy branches

Finger citrons are not edible unless preserved with salt or sugar, but were known to have been used by Empress Cixi to fragrance rooms in the Palace. Their auspicious symbolism derives from the play on the Chinese word for finger citron, foshou, homophonous with the words for blessings, fu, and longevity, shou. Hence, they were a popular subject in jade carvings of the Qing dynasty. A comparable jade water holder in the shape of a Buddha's hand citron formerly in the Qing Court collection is now in the collection of the National Palace Museum, Taiwan, collection number Gu Yu 故玉 3166; another Qing dynasty finger citron-form jade box and cover was in the C.T. Loo & Co., New York collection and sold at Christie's Live Auction 2553 on 23 Mar 2012, lot 1943.

naturalistically carved in recumbent position with legs neatly tucked beneath its body, turning its head backwards, the two humps detailed with incisions, the stone of a celadon-white colour with russet inclusions

sturdily potted on a short ring foot, the ovoid body rising to a waisted neck and inward curving wide mouth, applied overall save for the foot with a creamy white glaze with a network of black and faint russet crackles, with a tomabaku box

The form of this vase mainly existed during the Ming dynasty and especially popular in the Wangli period, two Ge-type crackle-glazed vases of the same shape and dated to Ming dynasty are respectively in the Zhangzhou Museum and Xiamen Museum. 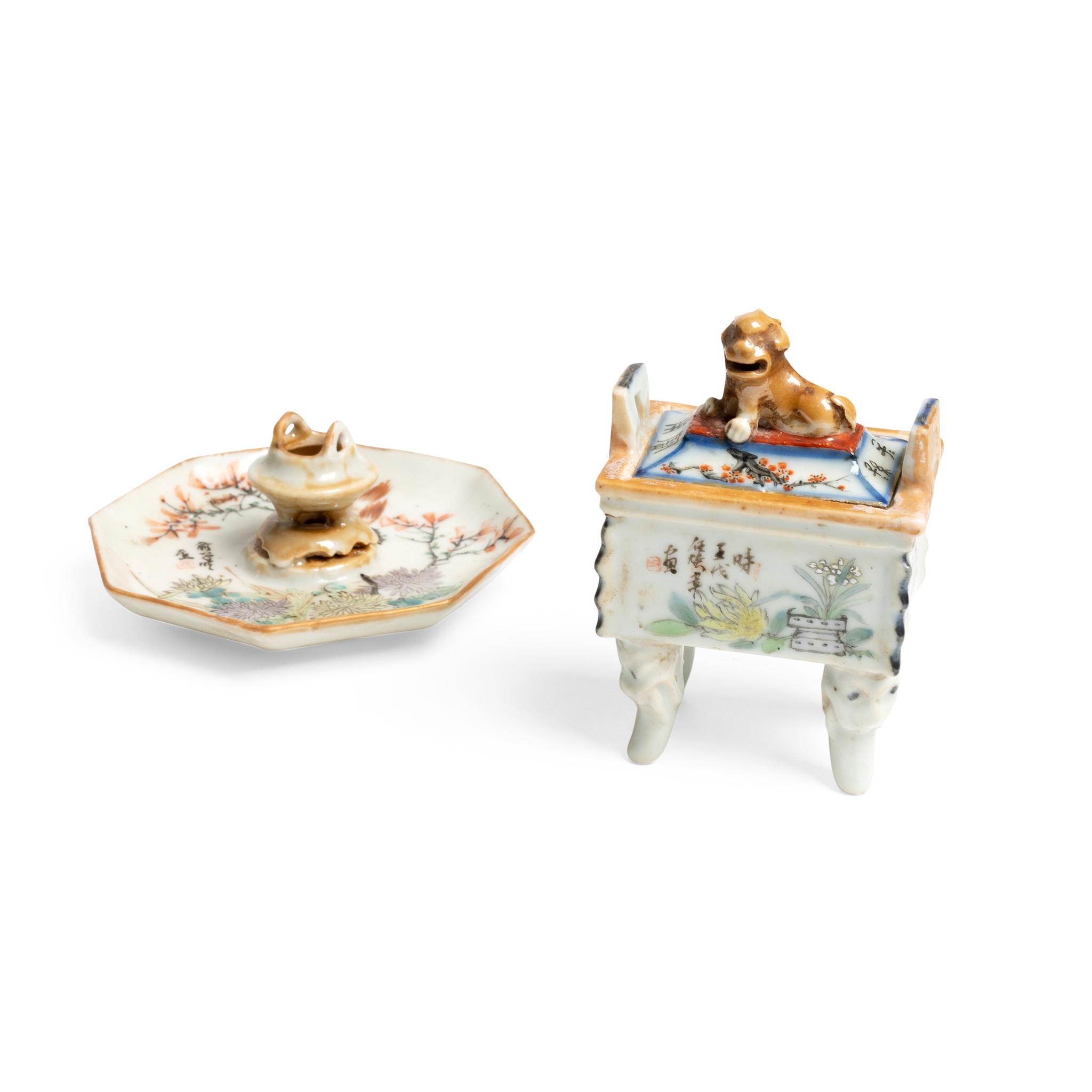 comprising: one famille rose incense burner of archaic ding form with lid, the burner supported on four taotie-masked legs, each side with different decorations, one side painted with a vase and finger citron and inscribed with 'Ren Huan Zhang' mark, the lid with a lion knob and 'Zi Sun Yong Bao' inscriptions; together with one qianjiang enamelled incense stick holder with a hexagonal dish, the dish finely painted a bird perching on tree branches above chrysanthemums and inscribed with 'Yu Zi Ming' mark

finely painted on the cylindrical body with a night scene, including a scholar holding a folded fan and his wife having titbits and wine before a large shanshui screen, they are appreciating a play performed by two joyous bearded figures, one seated playing musical instruments, another holding a spear with crescent-blade in action, the vase with waisted ribbed neck decorated with shanshui landscape