Senior Specialist Joy McCall looks back on her time with Lyon & Turnbull and considers why clients seek out valuations and why they subsequently decide to sell at auction.

Two years have now passed since I joined Lyon & Turnbull in the midst of the pandemic. Having previously worked as a Design specialist at Christie’s in London for 16 and half years and before that for Bonhams for over 6 years, I was offered positions in other auction houses. However, I preferred instead to contact Lyon & Turnbull as a progressive firm, with a strong professional reputation and a vision to expand into London.

The two-year marker is a good opportunity to look back and to ask some obvious questions.
Why do I undertake valuations and sell property?

Whilst the infamous three Ds of death, debt or divorce cannot be ignored in the auction business they are not always the answer and reasons are in fact more diverse. As my remit within the Design Department is broad, I am choosing to focus on Lalique glass – this is glass designed by René Lalique from 1900 until his death in 1945.

It was in April 2021 that we added specialist Lalique sales as a regular bi-annual feature to the Lyon & Turnbull calendar. The first 57 lots of the inaugural sale came from a single-owner European property. The client decided to sell because they were moving and the change in location prompted a re-evaluation of the collection. 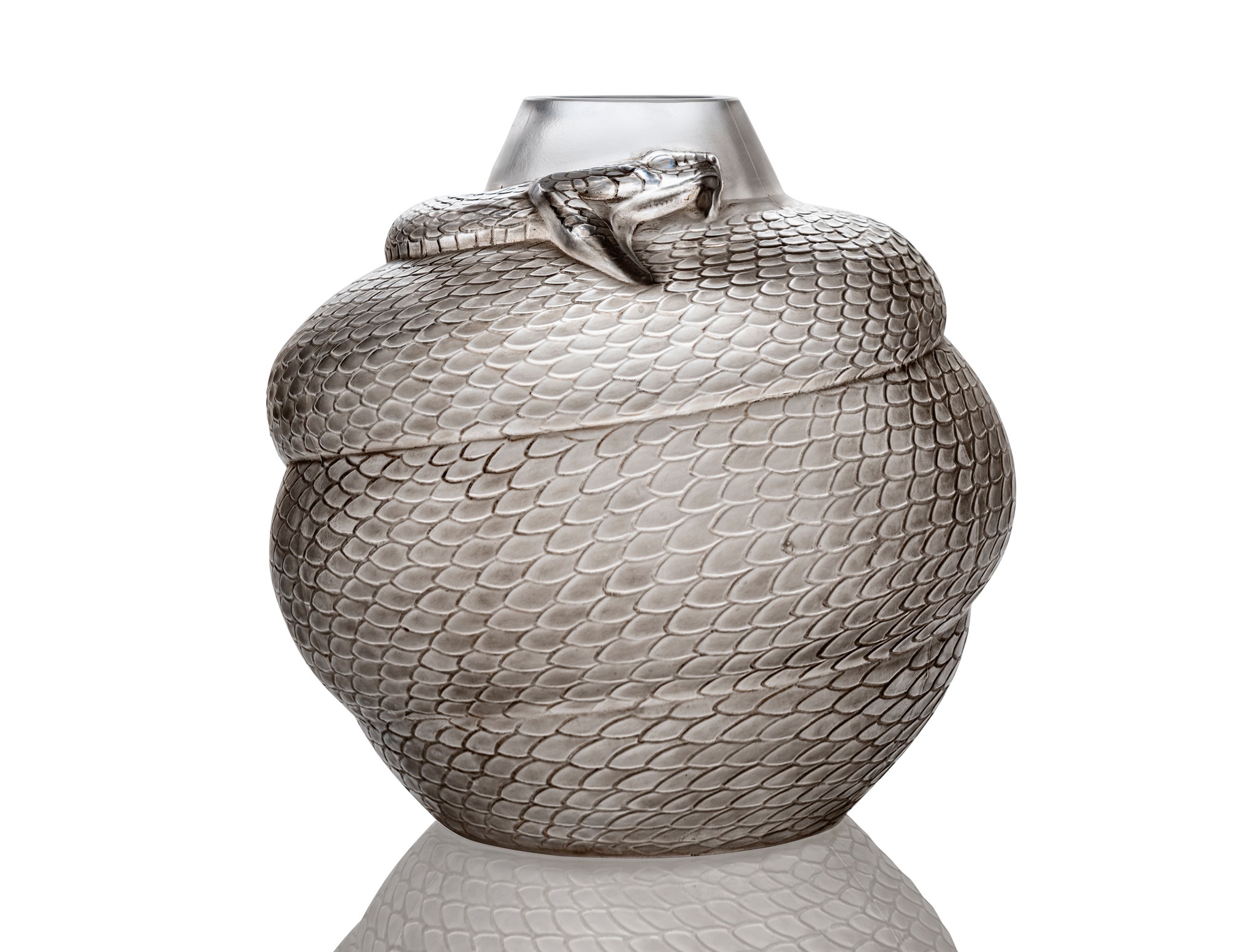 One of the top lots of this sale was the Serpent vase, designed in 1924, in clear and frosted glass with a grey stain which realised £27,500 (including premium).

This is not the first time that a house move has prompted a client to approach me to sell property.

In the October 2022 sale we are offering a number of lots belonging to a collector who mainly acquired the items in the last couple of decades of the 20th Century. Having consulted with the children the decision was taken that they really have no interest in the pieces and so the client is having the pleasure of seeing them offered for sale instead.

I have two favourite items from this collection – one is the Oreilles Lézards scent bottle, designed in 1911, which has lugs and a stopper decorated with wonderfully intertwining reptiles (estimate £5,000-7,000 + fees). The other being the Thomerey cocktail set for ten, designed in 1928, as I have never seen a set including the shaker, tray and 10 glasses (estimate £3,000-5,000 + fees). 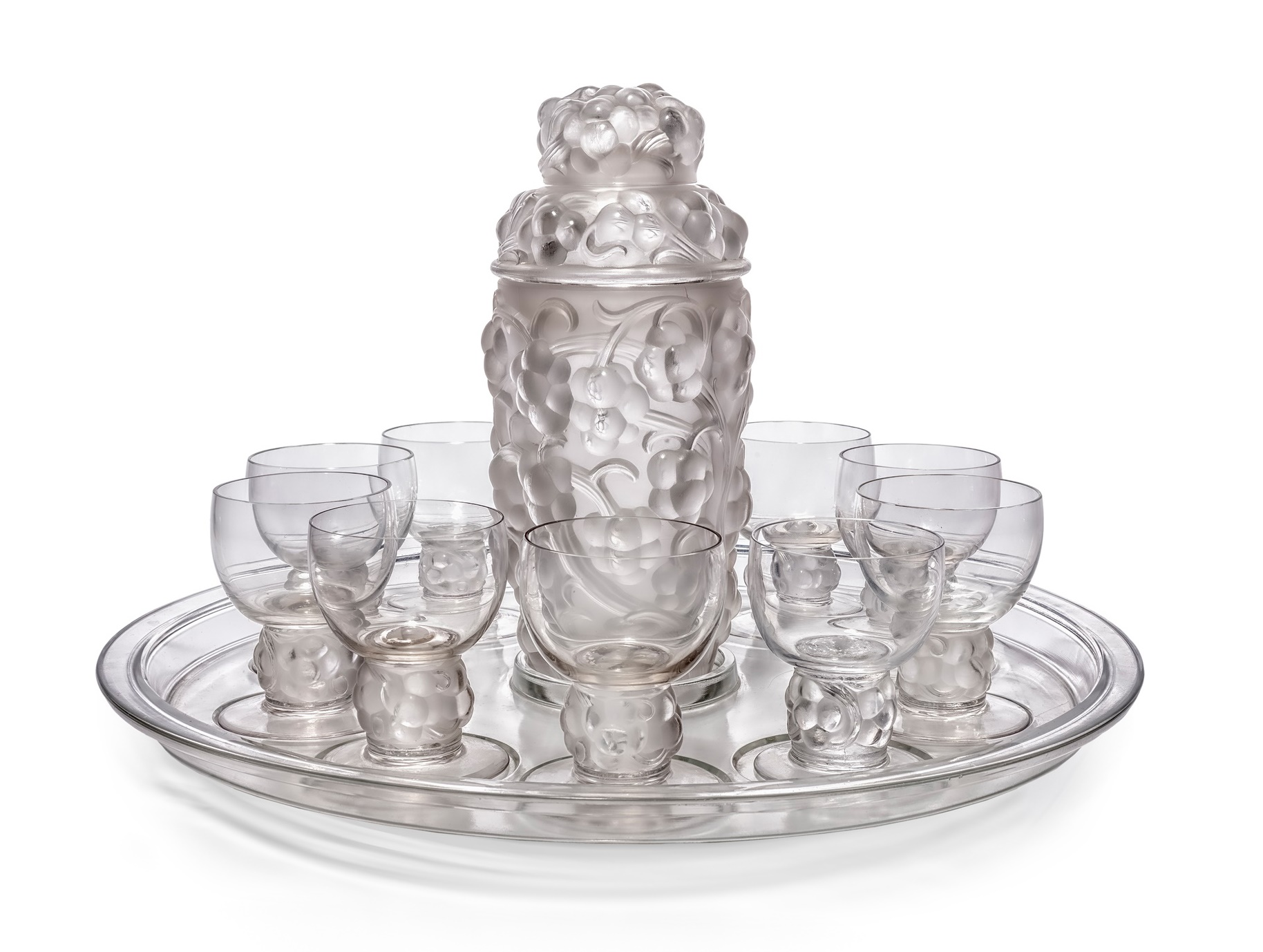 Another motivation for having a valuation and then selecting to sell pieces is simply that fun was gained through the process of searching for and buying pieces, then, when the collection is completed and has been enjoyed, it is time to move on to new projects. This was the case for the collector of a complete collection of car mascots sold in the April 2022 Lalique sale. They had managed to acquire all 29 commercial car mascots that René Lalique has created and in all the colour-ways known to have been produced during his life-time, in addition to two paperweights which were subsequently repurposed as car mascots. The top lots of this sale were unsurprisingly the rarest pieces with the Renard car mascot designed in 1930 realising £84,500 including buyer’s premium. Car mascots wonderfully embodied the golden age of the motor car between the Wars and were a celebration of a period when travel was all about luxury, glamour and elegance. The mascots were able to communicate the drama of speed and movement as well as the status of the owners.

Having identified three further Ds, besides death, debt and divorce, as divesting, dispersing and diverging, there is one more key reason for a valuation to be undertaken and that is for insurance purposes.

This year I was asked to update an insurance valuation for a client who has been collecting over a long period of time. In fact, no valuation had been undertaken in this century, so was long overdue and certainly did not include any subsequent purchases. The collection is/was primarily of unique works executed using the cire perdue technique which means lost wax.

This job changed my perspective and inspired me to not assume that clients remember to do things like such as updating valuations. I think I will be more forward in the future in asking if I can undertake insurance valuations.

The conclusion of my reflection undoubtedly has to be that there is no one reason why clients want valuations or wish to sell their property. However from a specialist point of view each request is a privilege to handle because not only does it provide an opportunity to handle a wonderful piece of design but also gives a moment of insight into why someone owns what they do and why they might wish to pass their custodianship of an item on to another person.

The bi-annual sales of Lalique currently take place in April and October in London. The next sale will be on 27 October and the first sale of 2023 is scheduled for 27 April.

Joy McCall is a Senior Specialist in Decorative Arts & Design from 1860 to the present day. She became part of the Lyon & Turnbull team in 2020.

After graduating from the University of Sussex with a Masters in British Art History and Critical Theory, Joy joined Bonhams Auctioneers, in London, where she was a specialist in Decorative Arts & Design. Following a move to Christie’s, she was appointed Head of the Decorative Art & Design Department, London, in 2008. She remained there for over 16 years establishing an international reputation for her expertise in Arts & Crafts, Art Nouveau, Art Deco and Lalique. She has obtained many world records in the field including one for the highest selling Scottish work of art at auction with Margaret MacDonald Mackintosh’s gesso panel The White Rose and The Red Rose in 2008 that realised £1.7m.

The Persecuted by John Bellany

Visualising the Dichotomy of the Human Condition